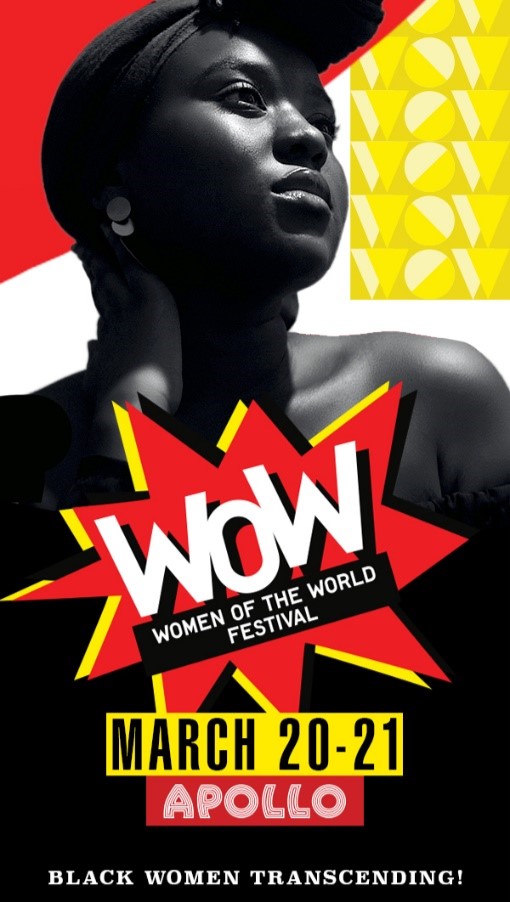 As part of the festival, the Apollo will feature a Live Wire conversation, Hazel Scott: The Darling of Café Society, part of the Apollo’s popular series that honors iconic individuals who have impacted the Theater’s history. Karen Chilton, author of “Hazel Scott: The Pioneering Journey of a Jazz Pianist,” will lead this celebration of Scott with special guests, Damien Sneed and Camille Thurman. Returning this year to the festival, WOW: Teen Summit will dissect gender politics and how it impacts girls and young women of color.  Through performances from singer, songwriter, and spoken-word artist Brianna Knight and singer Alyssa Martinez and a panel discussion moderated by reporter and producer Kay Angrum with community activists Akia S. Callum, Malaysia Freeman, and Hebh Jamal, audience members will be encouraged as a collective to take action towards their goals. The Festival will close with Apollo Film Presents: ImageNation’s Cocktails & Sol Cinema, featuring short films by women from around the world in speculative fiction, sci-fi, fantasy, and folklore. Additional details and a complete WOW Festival line-up will be announced at a later date. WOW Apollo is presented in partnership with The WOW Foundation.

Tickets for WOW (Women of the World), the live, virtual, two-day event start at $15 (through March 13), $20 for the week of the event (March 14-21) and are available now via www.apollotheater.org

ABOUT THE APOLLO THEATER

The legendary Apollo Theater—the soul of American culture—plays a vital role in cultivating emerging artists and launching legends. Since its founding, the Apollo has served as a center of innovation and a creative catalyst for Harlem, the city of New York, and the world.

With music at its core, the Apollo’s programming extends to dance, theater, spoken word, and more. This includes the world premiere of the theatrical adaptation of Master Artist-in-Residence Ta-Nehisi Coates’s Between the World and Me and the New York premiere of the opera We Shall Not Be Moved; special programs such as the blockbuster concert Bruno Mars Live at the Apollo; 100: The Apollo Celebrates Ella; and the annual Africa Now! Festival. The non-profit Apollo Theater is a performing arts presenter, commissioner, and collaborator that also produces festivals; large-scale dance and musical works organized around a set of core initiatives that celebrate and extend the Apollo’s legacy through a contemporary lens, including the Women of the World (WOW) Festival; as well as other multidisciplinary collaborations with partner organizations.

Since introducing the first Amateur Night contests in 1934, the Apollo Theater has served as a testing ground for new artists working across a variety of art forms and has ushered in the emergence of many new musical genres—including jazz, swing, bebop, R&B, gospel, blues, soul, and hip-hop. Among the countless legendary performers who launched their careers at the Apollo are Ella Fitzgerald, Sarah Vaughan, Billie Holiday, James Brown, Stevie Wonder, Gladys Knight, Luther Vandross, H.E.R., D’Angelo, Lauryn Hill, Machine Gun Kelly, and Miri Ben Ari; and the Apollo’s forward-looking artistic vision continues to build on this legacy. For more information about the Apollo, visit www.ApolloTheater.org.

ABOUT THE WOW FOUNDATION

WOW – Women of the World Festival is a global movement launched by Jude Kelly, CBE at Southbank Centre London in 2010. To date, The WOW Foundation has reached over 2 million people worldwide with its groundbreaking programs for change, including the WOW Festival.

The WOW Foundation produces WOW festivals across the world to celebrate women and girls, take a frank look at what prevents them from achieving their potential, and raise awareness globally of the issues they face while focusing on possible solutions. It is the biggest, most comprehensive, and most significant festival dedicated to presenting work by women and promoting equality for women and girls

Kamilah Forbes is an esteemed award-winning director and producer for theater and television. She currently serves as the Executive Producer at the World-Famous Apollo Theater in Harlem. In her diverse body of work, Kamilah is noted for having a strong commitment to the development of creative works by, for, and about the Hip-Hop generation. This Howard University alum has won awards for both directing and producing, including the 2019 NBTF Larry Leon Hamlin Producer Award and an NAACP Image Award.

Kamilah’s directing credits include Between the World and Me,  By the Way, Meet Vera Stark, written by Lynn Nottage Blood Quilt written by Katori Hall, and Sunset Baby written by Dominique Morrisseau. She has also worked closely with Kenny Leon on The Wiz Live, A Raisin in the Sun, Mountaintop, and Stick Fly on Broadway. She has produced several works for television, most notably the seventh season of the Tony Award and Peabody Award-winning series Russell Simmons presents Def Poetry on HBO.

Kamilah’s most recent directorial work, Between the World and Me aired as a special event on HBO and HBO Max in November 2020 to critical acclaim. In addition to her work at the Apollo Theater, Kamilah is set to direct the Broadway premiere of Soul Train alongside Questlove, Dominique Morrisseau, and Camille A. Brown. Ms. Forbes is a powerful leader, widely known for her ability and commitment to continue to highlight the ideas, complexities, and work of artists in the hip-hop community and beyond.

Buttah Skin Airs First Episode of “Beyond The Surface” Series