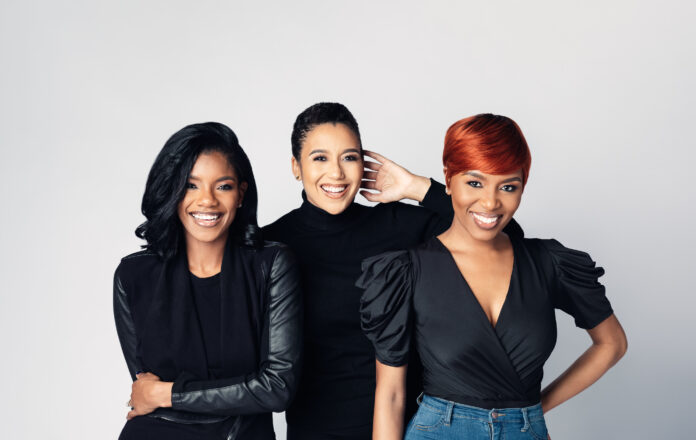 “You are allowed to be yourself without fear.” The quote resonates with the empowerment and artistry of the Nashville-based music group, The Shindellas. Claude Kelly and Chuck Harmony, multi Grammy-nominated hit songwriting and production duo, brought three musicians from different musical backgrounds, Kasi Jones, Stacy Johnson, and Tamara Chauniece, together as a group, and according to the press release, formed a band under the belief that when women come together, powerful change can happen.

Johnson was a solo artist who traveled to L.A. when she met Harmony. She joined his band singing with him and singing as a vocalist on Grammy-nominated albums. Jones met Harmony at a networking event when he was a keynote speaker giving feedback on songs, and he was just really supportive of her and stayed in touch. Chauniece sang online and Kelly reached out to her after finding one of her viral videos. Kelly then came up with the idea to make the independent musicians into a music group, thus the start of The Shindellas. “That’s kind of how Claude Kelly and Chuck Harmony found us, we were kind of just doing our own individual thing,” Chauniece said.

From the start, The Shindellas knew they each had the musical talent to bring to the table. Johnson’s includes both reggae and advertising jingles, Jones’ jazz and musical theater, and Chauniece’s contemporary gospel. “I was so excited because we got to sing about stuff that I felt I could be proud of … it’s not just about the entertainment, but about something with a little deeper meaning,” Johnson said.

Last year, The Shindellas premiered their single “Fear Has No Place” and dedicated it to all the Black women known for their perseverance, dedication, and strength as well as to remind the world of their legacy. Now, they premiered their new single, “Money,” which will be featured on their upcoming debut album, Hits That Stick Like Grits.

Related Articles: Rising Stars Shows “Fear Has No Place” in the Present

The inspiration behind the single, “Money,” was “getting to the reality of what people are doing for money.” They also highlighted that love conquers all and if people are treating themselves or others with love, they’re going to step into their truth and be proud of it. The single is on the debut album, Hits That Stick Like Grits. Originally named, The Greatest Hits, they changed it because “words hold meaning and it implies that their ‘greatest hits’ are behind them.” However, they still wanted the word “hits” to be apparent in the album’s name, thus creating Hits That Stick Like Grits. The name also gave background to the type of songs that were being produced in the album, like “Money.” “We didn’t want it to be about just romance or relationships. Everyone had been through so much at that point. We wanted to address the things we were actually thinking and talking about. It’s hard topics to talk about. They’re even harder to find a way to put into a song or a song that’s catchy and honest,” Jones said.

Empowering women is an important aspect of the group’s creation of music. According to Jones, they discussed how Black women are often portrayed as monolithic. The Shindellas’ goal was to express women to the world the way they would’ve wanted to see it when they were children. “We are three Black women from three different parts of the country and three cultural backgrounds, and being able to represent our individuality, backgrounds, and personalities, can bring us together as one, and that was really important to us. So often, we have so much diverse talent out there, but so often were portrayed just one way,” Jones said.

The Shindellas’ uniqueness from other music groups comes from their melting pot of influences. The group has multiple influences like Fela Kuti, Bob Marley, Michael Jackson, Whitney Houston, Anita Baker, Aretha Franklin, Bill Withers, The Clark Sisters, Yolanda Adams, CeCe Winans, Janet Jackson, Mariah Carey, Tina Turner, Otis Redding, Dolly Parton, Louis Armstrong, The Supremes, The Pointer Sisters, and The Andrews Sisters. “We don’t shy away from trying to embody the same grace of The Supremes or like that grit or that gospel kind of sound of The Clark Sisters. We try to embody all of our greatest influences and I think that’s what sets us apart in that regard,” Chauniece said.

With creating music, the group is proud of how their artistry allows them to control how their music is portrayed. When shooting “Fear Has No Place,” they were able to edit the entire video, with the help of others. With producing “Money,” they placed their ideas together to create the single’s cover art. “We are not your typical girl band. We call ourselves ‘Mavericks Beyond Music.’ So, we are definitely going to push our limits as far as our music. Which I believe we do in how you see us and how we portray Black women together in the music industry,” Johnson said.

Chauniece believes their artistry has been fearless and how they present their music to the world and how it portrays their reality sets them apart and gets people to think about what matters. The Shindellas take their lives, experiences, and pain, and use it as fuel and energy to find a way to turn it into joy, and make their artistry feel good. By showing the connection of music with sisterhood, they embrace empowering women through their music and visuals. “Whether people know all of our whole individual stories or not, there’s a connection, a true sisterhood, and a true support system that I think resonates more on stage when you hear our blend because we’re not sisters, but we sound like sisters,” Jones said.

Jeriel Harvey Paves the Way for Change Through His Love for...