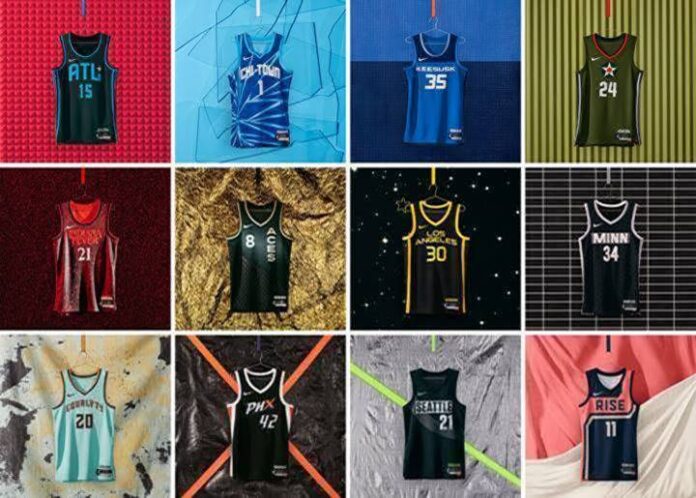 As the WNBA prepares for its 25th season, Nike and the WNBA collaborated to unveil a uniform collection that helps set the league’s foundation for the next 25 years and beyond. Nike has partnered with the WNBA for its game uniforms since 2018, but there was more to be done—more personalization, options, storytelling, and attention to the careful dialing-in of performance features.

Sharper creative expression and refined-fit insights directly from players guide the new Nike uniform system and apparel offering for the WNBA as the league embarks on its 25th season. The new WNBA uniform system from Nike features three game uniform editions for each of the 12 teams in the league, bringing stories from their cities and communities to life through the muse of female archetypes in storytelling and film, the WNBA Nike Heroine Edition, Nike Explorer Edition, and Nike Rebel Edition.

“The basketball uniform is an important representation of the brand of WNBA players and teams, and a point of pride for fans,” WNBA Commissioner Cathy Engelbert said. “In partnership with Nike, unveiling new and exciting adaptations of the WNBA uniforms is a dynamic way to build on the foundation of the league’s first 25 years.”

Nike Embraces a Partnership Built on Progress Through Sport

The launch of the Nike WNBA uniform collection stems from a deeper partnership built on progress through the sport.

“In 2021, Nike has a responsibility in our league partnerships to invest at a level that stands for something more,” said Sonja Henning, Nike vice president of North America League Partnerships. “We have to make sure that ‘for all’ means inclusivity into a community where women can participate in sport, and in the conversations that only sport can open up.”

Nike and the WNBA’s partnership through programs and initiatives indicate the way both groups see women’s sport—as a position of influence for spectacular athletes and leaders shaping the future of women’s sport and beyond.

The energy from within the WNBA to move beyond the box score as the metric for the league’s progress challenges partners like Nike to transcend its relationship beyond donations or branded gear. To that end, Nike is an inaugural member of the WNBA Changemakers collective, which recognizes values-driven businesses that are helping lead the way in the advancement of women in sports.

“Nike’s support as an inaugural WNBA Changemaker will enable us to continue transforming our league in key areas, and through our partnership, Nike continues to raise the bar in stepping up and supporting the current and next generation of elite athletes,” Engelbert said. “We’re grateful for their steadfast support of the league and the athletes of the WNBA, contributing to a bright future for women’s sports.”

“Twenty-five years ago, the WNBA was a league that none of us knew was possible,” Henning said. “Today, we’re in an empowering moment for women’s basketball players, but also for female and non-binary athletes across all sports. I can’t wait for what the next 25 years hold.”

Don’t Be Afraid to Be Assertive