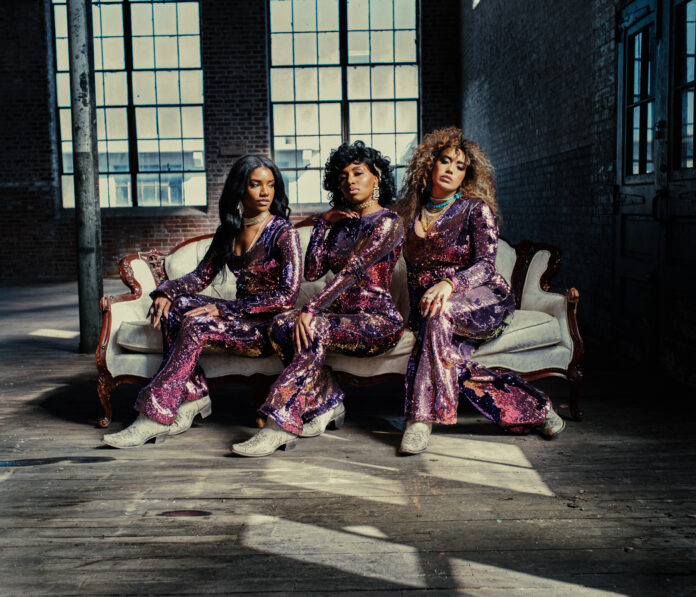 On April 15th, multi-GRAMMY-nominated hit songwriting and production duo Claude Kelly and Chuck Harmony (a.k.a Louis York) were excited to finally serve up breathtaking visuals for The Shindellas’ new single “Money.” They performed a YouTube Live premiere at 1 PM EST. Showcasing Kasi Jones, Stacy Johnson, and Tamara Chauniece, the single has a huge sound, and the video, directed by Aaron Greene, is just as big and exhibits their flair for show-stopping dramatics. You can now buy or stream “Money” here.

“We played ‘Money’ for the fellas over at Nocturne Pictures and they came to us with an idea for a visual that embodied the joy, sisterhood, and love they saw in us,” states The Shindellas. “It was an absolute pleasure bringing this vision to life and we hope that everyone watching it claps their hands, stomps their feet, and walks away remembering that love is all we need.”

“With the ‘Money’ video, we wanted to capture the magic of The Shindellas’ live experience, so we teamed up with our good friends at Nocturne Pictures to bring the vision to life. You can feel their energy in every shot,” states Claude and Chuck.

Handpicked by Chuck and Claude, the masterminds behind some of the most popular and liberating hits for artists like Rihanna, Jennifer Hudson, Whitney Houston, Miley Cyrus, Fantasia, Jazmine Sullivan, The Shindellas are an amazing three-part harmony band. “Money” will be featured on their debut album Hits That Stick Like Grits via Weirdo Workshop out this year.

The Shindellas is a band formed under the belief that when women come together, powerful change can happen. They are advocates aligned under the tenets of sisterhood, excellence, elegance, and empowerment. With a hint of nostalgia as well as modern appeal, their music pulls the listener in with every note that they sing. These ladies really stand out!

The Shindellas, a Nashville-based band with no lead singer, share the spotlight equally. The Shindellas introduce a unique genre of music to their audience composed of jazz, soul, and true R&B. These women are proponents of elegance, empowerment, and self-love that they spread through their music.

In November 2020, The Shindellas premiered their single “Fear has No Place” on ESSENCE.com (click here) and dedicated it to all the Black women known for their perseverance, dedication, and strength as well as to remind the world of their legacy. The Shindellas have been highlighted by NPR (click here), appeared at the ESSENCE Festival of Culture, performed at the TEDxNashville Women conference, and have toured the country performing with Louis York. Last year, the trio released their first EP Genesis (Click Here).