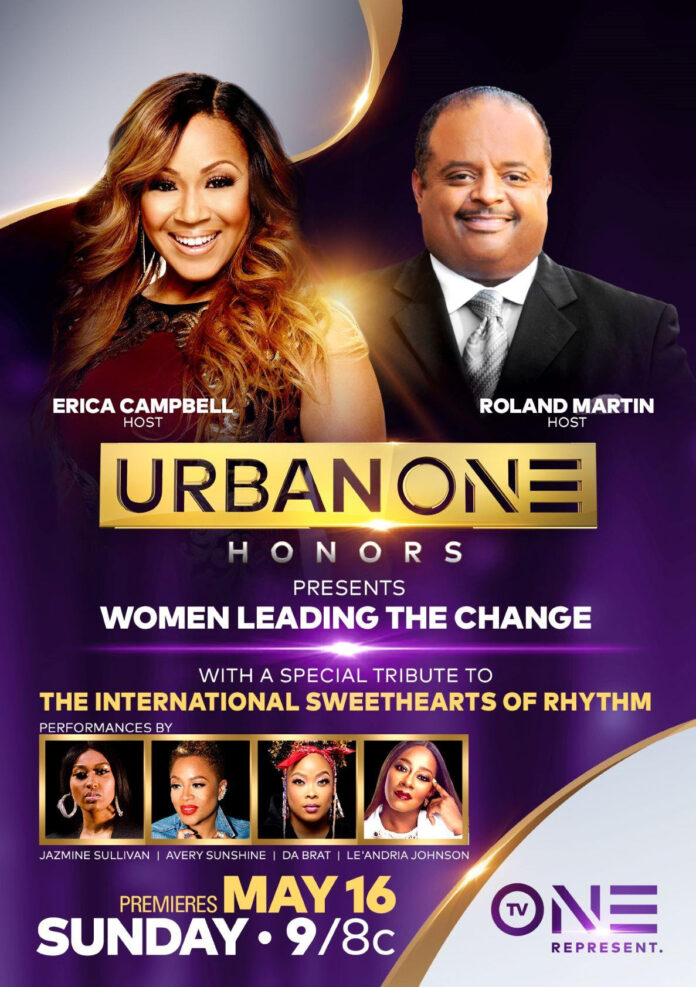 The honorees for the annual Urban One Honors, which celebrates the achievements of African American women, have been announced by Cathy Hughes, founder, and chairwoman of Urban One. This year’s award show will air on TV One on Sunday, May 16, 2021, at 9 p.m. ET/8 p.m. CT, which will be simulcast for the first time on CLEO TV.

This year’s theme is “Women Leading the Change,” and the program will recognize the myriad achievements of women leaders who are blazing trails and creating new pathways for others in their respective areas of expertise. The Urban One Honors class of 2021 honorees in business, media, health, and politics include:

Pulitzer Prize-winning reporter Nikole Hannah-Jones is reframing the national conversation by covering the impediments and contributions made by Black Americans. Through her 1619 Project, published in the New York Times Magazine, Hannah-Jones continues to push past the obstacle of reframing the country’s history by placing the lasting impact of slavery and contributions of Black Americans at the center of the national conversation and educational curriculum.

Founder of The Black Doctors COVID-19 Consortium, Dr. Ala Stanford is a healthcare champion who answered the call to eliminate institutional barriers preventing healthcare to those in her community. She is a staunch advocate for healthcare equality. Her work to mobilize the Black community and help it understand the need and urgency to vaccinate against COVID-19 reaches beyond the U.S. to Haiti, which has not yet begun to vaccinate its population.

CEO of Walgreens Boots Alliance Rosalind Brewer is the third African American female executive selected to lead a Fortune 500 company. She has successfully broken the “glass ceiling” to blaze trails in corporate America at companies like Starbucks and Sam’s Club. Brewer is a distinguished and experienced executive who has led organizations globally through periods of changing consumer behavior by applying innovation that elevates customer experiences, ultimately driving significant and sustainable growth and value creation.

As President and CEO of Martha’s Table, Kim R. Ford leads the organization in its mission to support strong children, strong families, and strong communities in Washington D.C. Ford previously served in the Obama Administration’s Recovery Implementation Office, where she helped lead efforts to implement the $350 billion American Recovery and Reinvestment Act to ignite the economy.

As a civic entrepreneur and alderman of Evanston’s 5th Ward, Robin Rue Simmons is working to break down systemic racism and barriers that hold the Black community back. Rue Simmons brought to the table the item “A Resolution Establishing a City of Evanston Funding Source Devoted to Local Reparation.” Its central provision diverts tax revenue from cannabis sales for local reparations. Her nimble political maneuvering and effort to get people to rethink what reparations mean can serve as a lesson on how to succeed in the long fight for reparations.

In commemoration of Urban One Honors, Radio One will promote its “Hometown Sheroes” initiative, honoring women of distinction in all 13 of its urban markets. Listeners will be encouraged to visit their local Radio One station website to nominate local “Hometown Sheroes,” ladies making a difference to enhance the lives of others in their communities. These sheroes include teachers, first responders, volunteers, and community activists. A panel of in-house judges will select one “Hometown Shero” from each market. The winner will receive on-air recognition in their respective market, and on its digital platform, an award presented by station management and recognition on the national Urban One Honors website.

Urban One Honors will also pay a special homage to the International Sweethearts of Rhythm, the boundary-breaking, all-female jazz band. Helen Jones Woods, the mother of Urban One Founder Cathy Hughes, was a founding member of the group. The Sweethearts band comprised 18 ethnically diverse members who overcame discrimination, racism, and sexism to become symbols of success in the face of adversity. Five special musical performances will be dedicated to The Sweethearts throughout the awards ceremony, with each song celebrating the jazz ensemble through electrifying performances of their hit singles with a modern twist.

Grammy-Award-winning gospel artist Erica Campbell and award-winning journalist and author Roland Martin will host the event. Now in its third year, Urban One Honors was created to acknowledge and pay homage to individuals and organizations whose work significantly impacts society and culture.

Urban One Honors is executive produced for TV One by Eric Tomosunas and Robert Boyd of Swirl Films and produced by Jazz Smollett. Susan Henry serves as executive producer for TV One. Kashon Powell, vice president of programming for Radio One, and Donyell Kennedy-McCullough is senior director of talent and casting. Robyn Greene Arrington is vice president of original programming and production.