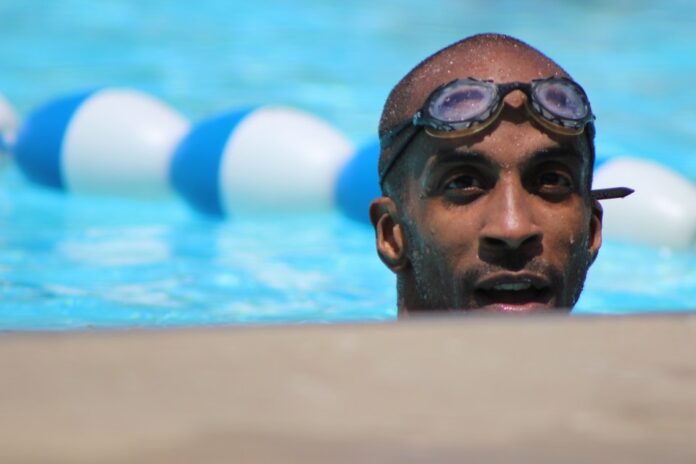 “The National Swimming Federation has never had a team compete at the Olympic Games,” said Federation President Duarte Iola. “Not only will Mr. Baleka be the first swimmer from Guinea Bissau at the Olympics, but he will also, at fifty years old, be the oldest swimmer in Olympic history.”

Sergio Mane, President of the Guinea Bissau Olympic Committee, stated that he submitted an application to the “Fédération Internationale de Natation” (FINA) to secure Mr. Baleka’s eligibility to compete under the International Olympic Committee’s (IOC) universality rules that allow smaller nations with developing swimming programs to send athletes to the Olympic games without having to meet certain qualifying standards.

A thirteen-time United States Masters Swimming National Champion and National Record Holder, Mr. Baleka who won four silver medals at the 2017 FINA Masters Swimming World Championships held in Budapest, Hungary. Mr. Baleka’s swimming career started in childhood and continued as an undergraduate at Yale, where he led his team to a first-ever Ivy League Championship, but he narrowly missed qualifying for the 1992 Olympics Trials–by only eight-tenths of a second.

Facing disillusionment after the failure of his initial Olympic dream, Mr. Baleka embarked on a variety of international adventures and careers, including becoming a celebrity fitness guru for the truck driving industry. His story has been featured on the cover of Sports Illustrated and was the subject of an Emmy-Winning Documentary Short in 2016.

“I am extremely honored to represent the people of Guinea Bissau at the Olympics,” said Mr. Baleka. While he acknowledges that his quest for Olympic gold is a long shot, he says, “Whatever the final result, at age 50, my perseverance is the very spirit of the Olympic movement. I want my Olympic dream to serve as an example to others, especially the people of Guinea Bissau and middle-aged people everywhere.”

In recent competitions, Mr. Baleka swam faster than 27 of the Olympians competing in the Men’s 50 Meter Freestyle during the 2016 Olympics in Rio de Janeiro. This event is Mr. Baleka’s signature event.

Genetic testing made Mr. Baleka’s extraordinary path to the Olympics revealing that his paternal origins were from the Balanta tribe of Guinea Bissau. Mr. Baleka is the first “Afro-descendant” from the United States to be granted citizenship in Guinea Bissau based on DNA results, and he will compete for his ancestral homeland. He believes that his ancestors’ connection to their motherland is important for African-American descendants of slavery who are navigating their own complex feelings about America. Jacob Blake, his cousin, was shot seven times in the back by Kenosha, Wisconsin police in August of 2020, adding to the country’s outrage over racism and police brutality.

This fight for going to the Olympics is more than a personal journey for Mr. Baleka, it’s a journey for his culture. With rigorous training aside, “the biggest challenge has been financing,” said Mr. Baleka. “I’ve had to find a way to live and train in Guinea Bissau on my own. Mr. Baleka’s team has set up a GoFundMe page to help with his dream of finally making it to the Olympics.

To see more on Siphiwe Baleka road to the Olympics, check out his Vimeo Video and Website.

Obama Issues His first 2020 Endorsements: ‘Our Country’s Future Hangs on...