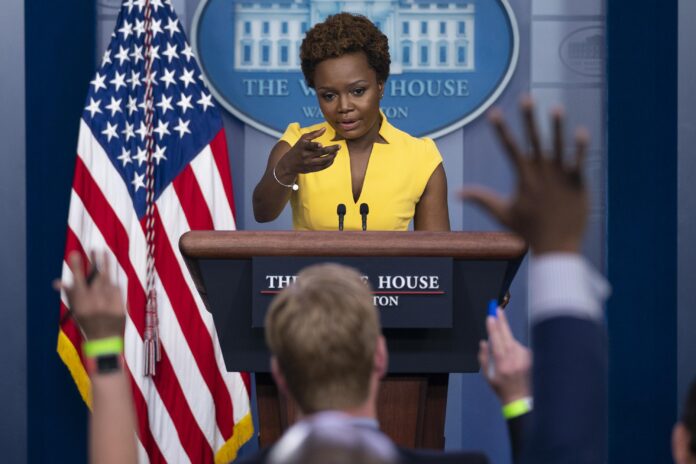 Jean-Pierre became the first openly gay woman to deliver a White House briefing, and she is only the second Black woman in history to do so. The first, Judy Smith, did so in 1991 as deputy press secretary for then-President George H. W. Bush.

“I appreciate the historic nature. I really do,” Jean-Pierre said when asked about the rarity of a Black woman standing behind the podium. “But I believe that being behind this podium, being in this room, being in this building isn’t about one person. It’s about what we do on behalf of the American people. Clearly the president believes representation matters, and I appreciate him giving me this opportunity.”

Jean-Pierre, 43, previously worked on the 2012 Obama campaign. The daughter of Haitian immigrants, she worked at the progressive group MoveOn and as an analyst on MSNBC before joining the Biden campaign last year to serve as a top aide to Vice President Harris, then a candidate.

She had previously eased her way into conducting briefings by doing them aboard Air Force One, where the pool of reporters is limited to roughly a dozen people and the broadcasts are audio only. Jean-Pierre also typically sits in the room with other press aides during daily briefings. Press secretary Jen Psaki has delivered almost daily briefings since Inauguration Day. A veteran of the Obama administration, Psaki has indicated she does not intend to stay in the role for much longer than a year.

“Today is a big day in the press office and @WhiteHouse,” Psaki tweeted Wednesday morning. “My partner in truth–@KJP46 is doing her first full briefing from the podium today making history in her own right. But doing her real justice means also recognizing her talent, her brilliance and her wonderful spirit.”

Jean-Pierre is seen as one of a handful of obvious potential successors once Psaki leaves the job. Others include Symone Sanders, the chief spokesperson for Harris and a top Biden aide during the 2020 campaign.

“I will be raising my coffee cup during the WH press briefing in celebration of representation, aptitude and brilliance. The ancestors are proud,” Sanders tweeted.