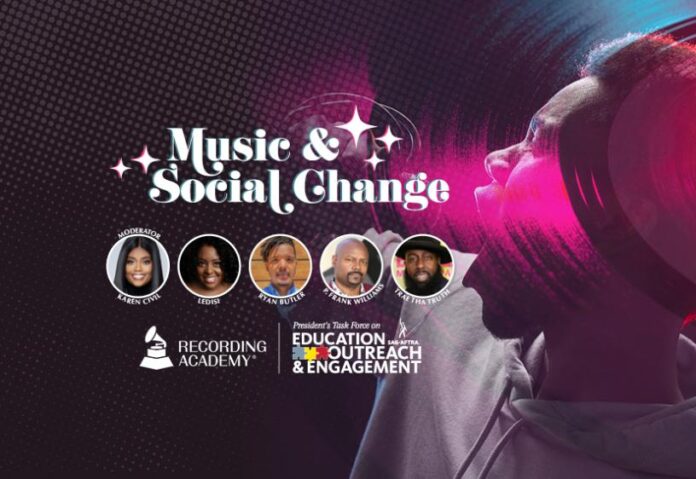 In the discussions, the panel held conversations with Black musicians and hip-hop artists on the forefront who use their collective voices to speak conscious, unapologetic truths on behalf of meaningful movements, protests and demonstrations by way of lyrics, videos, ambassadorship, fan engagement, and more.

SAF-AFTRA recognizes that music has historically been a vehicle of expression for artists and fans to express rage against the world’s injustices, allowing the oppressed to be heard on a global scale.

Panel member Trae Tha Truth took a moment to share with ENSPIRE Magazine some information on his background. He is an acclaimed recording artist, activist, and humanitarian who uses his platform to stand up for communities while dedicating both his time and money to be a voice for change. His non-profit organizations – Angel By Nature and Relief Gang – have benefitted charitable causes serving countless families. Trae Tha Truth has been recognized by companies such as Ford Motor Company, Shell, and the NAACP for his tireless commitment to render aid to the downtrodden and serve as an ambassador for Habitat for Humanity. The experiences of the disenfranchised often inspire his music, and he’s candid about his pain through his prolific lyrics. Inspired by his work, Trae Tha Truth has also partnered with an endless stream of celebrities, including Beyonce, T.I., Colin Kaepernick, and Estelle (to name a few) – all working together to make a difference in the community. Trae Tha Truth recently received Billboard’s Change Maker Award, where he was recognized for his philanthropic work and social justice advocacy.

The Full Program is available to view on YouTube and more information can be found on the SAG-AFTRA Website.