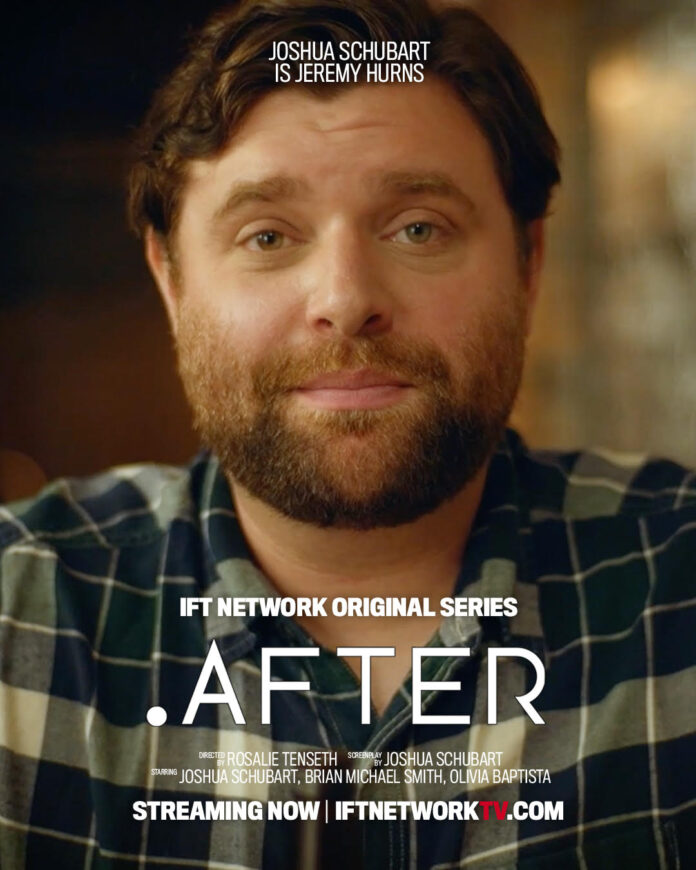 Not all children have a “perfect” childhood. When children face hardships, it’s difficult to comprehend the altitude of the situation, so that is when children search for an escape. For actor and filmmaker Joshua Schubart his escape turned into his passion and career when he took an acting class when entering catholic school. Now he is debuting his new series After.

Schubart’s upbringing wasn’t very easy with growing up homeless, in the foster care system, and dealing with mental health issues. However, when he was put in catholic school and attended acting class it changed his life. He found a motivator to better his life and go after his dreams. His resilience to his upbringing made him a very successful person in the film industry from being an actor, filmmaker to being a trained stunt man/stage combatant. His latest project is a new series being released with IFT Network called After, where a widower navigates life and the dating scene after losing his wife. This series shows the story of life, love, and rebirth.

ENSPIRE Magazine interviewed Joshua Schubart to discuss how he came up with the idea for After, his journey in the film industry, advice for people starting out in the industry, and much more.

With your new series, After, what was the meaning/story behind the film for you? What inspired you to make this film?

The idea for “AFTER” came on my wedding day. I was walking away from the alter holding my new wife’s hand and thought, “What the fuck would I do if you died?”. It was a new fear that only comes when you make this kind of commitment. It was a thought that persisted for quite a while, and I eventually wrote it down. I also wanted to do a deep dive into what it means to be mentally ill. The triumphs, failures, how messy and awkward it can be, but also how absurdly funny life can be when a person is dealing with these kinds of complex emotions. These two things came together to become what “AFTER” is today.

Do you find inspiration from your upbringing from homelessness, foster care, to mental health struggles?

I absolutely pulled from my own life experience when writing the show. All three topics are extremely close and important to me. They are all usually cast in a negative light, that is almost always mired in hopelessness. These things helped shape me into the person and artist I am today. I want to shine a light on these topics, so people that may have gone through what I have, can finally see themselves in a positive way.

Do you have any advice for younger people that are going through similar situations that want to be in the film industry?

Learn, listen, and be available. Don’t let anyone tell you what you’re supposed to be, experience as much of life as you can, and you will find where you belong. Folks like us don’t get a lot of helping hands. We don’t have family in the industry, or any predetermined pathway forward. So the work that you put in only helps you become a better artist, person, and community member. Above all else remember, the struggles, pain, and hard knocks have shaped you into the resilient human being you are today. The power to persevere, grow, and be explosively better are some of the most sought-after traits in the industry. Good thing you’ve been practicing your whole life.

Many people are facing mental health challenges since the pandemic and find it hard to go after their dreams or even getting out of bed. What has your motivation been when you were going through a bad mental health time?

Look, over the course of this pandemic sometimes I was too overwhelmed to function, and others where I couldn’t stop being creative. Both are perfectly okay. Whatever you are going through or dealing with is just fine! I saw a whole lot of toxic messaging flying around about how, “If you aren’t writing the next great American novel, or crafting a banger of a screenplay with all this time off you fail the pandemic.” That’s all bullshit. Everyone is different. No one looks the same going through something like this. In order to keep myself motivated I did a whole lot of meditation (still do) and relied heavily on everything, I learned from CBT (Cognitive behavioral therapy). Did it always work? No, but it certainly helped me figure out what was going on with me at the moment.

Do you think that being well versed in the film industry (actor, filmmaker, screenwriter, and stuntman) has helped you with improvements in the industry and in your craft?

I have found that the more I immersed myself in all aspects of the industry, the better I’ve been able to operate in it. The more you learn and grow, the more opportunities will come your way. Every new facet you come into contact with gives a new eye-opening perspective and calms you down a bit. The more you figure out, the less mysterious everything seems. I never thought I would do all the things I do now, but I love every second of it.

Schubart has had a very diverse career from projects ranging in small indie films to walking the boards at the Metropolitan Opera to being the voice of several books on Amazon Audible. Some of his recent work includes a recurring role in the Amazon series The Tick, and appearances in Seven Seconds (Netflix) and High Maintenance (HBO).

Schubart’s series, After, can be viewed on IFT Network. To check out the trailer click here.

“Pedis And Mimosas” With Shannon Mack