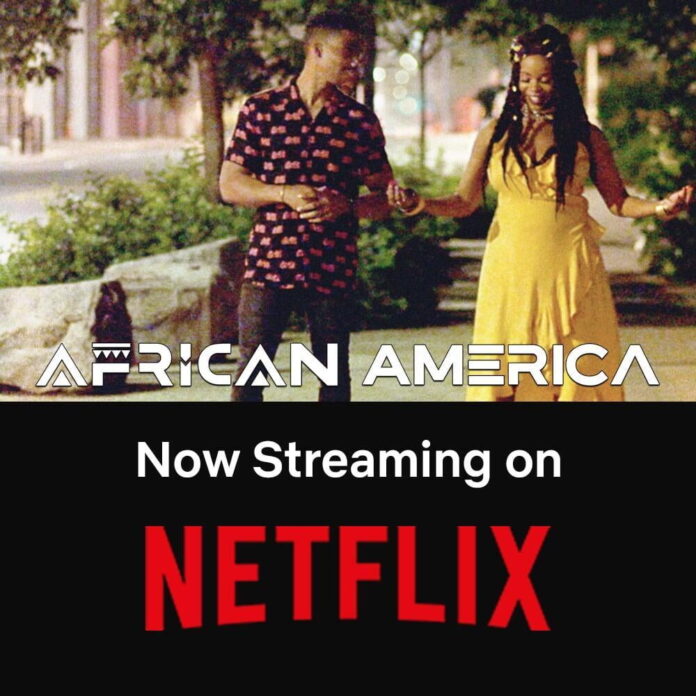 African America is a 2021 Pan African Film & Arts Festival (PAFF) “Best 1st Feature” Film Nominee that explores what blackness and living your dreams looks like in America. African America explores police brutality, anti Blackness, immigration, racial injustice, and all the nuances of being African-American in America. Nompumelelo, the lead character, escapes to America from Johannesburg, South Africa, to live her childhood dream of starring on Broadway in New York City. However, Nompumelelo soon realizes that the American dream she seeks may not apply to African-Americans or Africans in America.

Films like African America are critical, especially when released on well-known platforms such as Netflix. The film spreads awareness and sheds light on the reality of living life as a Black person in America. Many African Americans come to The United States to live the “American Dream” only to realize that their skin color doesn’t allow them to dream the same dreams as other Americans. Muzi Mthembu, writer and director of the film, speaks to the importance of the movie in how it addresses how we as individuals pursue our dreams, and how due to issues such as race, the answer to this question becomes more and more difficult for African-Americans. With this film, Muzi Mthembu hopes to bring light to this critical issue alongside many other challenges African-Americans face.

Muzi Mthembu elaborated on the importance of the themes of the film and the complexity of the issues as we face them today, saying that “My film asks the question, where do we go with our dreams, and this is particularly poignant to ask given the year that we have all just left behind, a year beset by a pandemic that has devastated the medical and economic well being of many, but more tragically to communities of color around the world. We see our leaders exploiting the pandemic to corrupt ends, and we have also seen the gross racial injustices that plague the diaspora living in the world’s most affluent and prosperous country on the planet. As a black man living in today’s times, I have found myself ever more frequently asking myself, what do I do with my dreams now?” Again, it’s a difficult question with no easy answer. Still, it is one that we must continually ask ourselves as a society if we hope ever to create positive change regarding these issues.

In regards to the importance of spreading this message, Netflix picking up and premiering the film has helped expand its audience widely, something both Mthembu and MVP productions have noted as a positive, writing that “MVP Productions and Azuspeak Productions are very excited that our little film that could find itself on a huge international platform. We hope that a big brand like Netflix will help African America find itself an audience keen on a transnational tale of self-determination, socio-political commentary, and black girl magic.” While many can be unaware of just how deep and complex these issues go simply due to their limited experience in the broader world, having Netflix push this film can enable those who would otherwise never understand these issues begin to make meaningful connections and hopefully push for positive change alongside figures like Muzi Mthembu.

Most times, African-American characters, especially stories, are underrepresented in media, leading to the death of understanding regarding the wide range of issues that African-Americans face daily. African America helps break that trend, telling a unique story of immigration and how race makes the so-called American Dream an exclusive club rather than something we can all strive for. Everyone should take time out of their day and gather their friends and families to catch African America, premiered exclusively on Netflix to better understand these issues.

Legendary Damon Celebrates His Birthday with a Star-Studded Bash at Sunset...