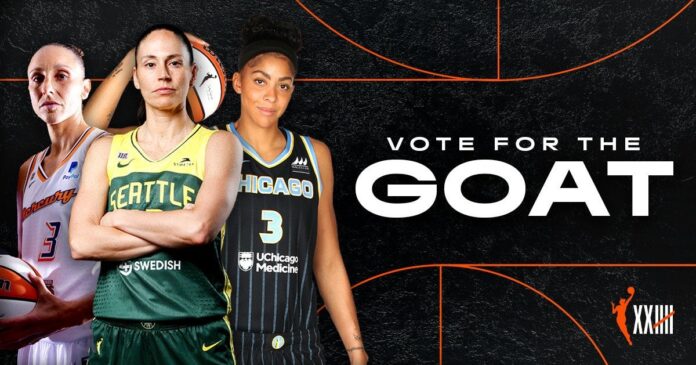 ( ENSPIRE Sports ) In Celebration of the WNBA’s 25th Season, Fans Can Vote for the GOAT in New Program

The WNBA has announced the selection of “The W25,” a group of the 25 finest and most impactful players in WNBA history, to commemorate the league’s historic 25th season. During halftime of the game between the Las Vegas Aces and the Chicago Sky, “The W25” was unveiled on ABC. Next, the league will launch the first-ever “Vote for the GOAT” contest as part of this historic milestone. Fans will choose from these 25 WNBA legends who they feel are indeed the greatest of all time.

WNBA Commissioner Cathy Engelbert spoke to the extent of the greatness of these players both on and off the court, stating that with this historic 25th season, “the WNBA and our fans are celebrating the impact the WNBA has made on sports and society over a quarter of a century. I can think of no better way to honor those responsible for that impact than by unveiling the members of this prestigious group, The W25. These athletes have played the game at the highest level on the court–they are scorers and rebounders, assist makers, and defensive stoppers, leaders and mentors. In the community, they have powerful voices, individually and collectively, speaking out on important issues in our society. Together, they have transformed the way the game is played, changed the way athletes are viewed, become incredible role models, and inspired generations of young, diverse athletes.”

In short, it’s simply impossible to go over the achievements of all these players in one article, as they’re all deserving of incredible write-ups. Sue Bird and Diana Taurasi both have 5 Olympics Gold Medals to their names, and then there are their accomplishments in the WNBA! These players have done spectacular things on the court and in the community, so it’s up to you to decide who is the natural GOAT.

But how do I vote for the GOAT, you ask? Well, there are several ways, all detailed here.

Vote for the GOAT – The Details

Beginning today at 5 p.m. ET, fans will vote for the member of “The W25” they believe is the greatest of all time through the “Vote for the GOAT” program. Fans can vote for their GOAT by calling out their pick from among “The W25” with the hashtag #WNBAGoatVote on Twitter, on WNBA.com, or the WNBA App. Fan voting will conclude at 11:59 p.m. ET on Sunday, Sept. 19. The GOAT will be unveiled during the WNBA Finals 2021 presented by YouTube TV.

How fans can vote:

Several of the nominated stars, such as Sue Bird and Tamika Catchings, have already spoken to what an honor it is to be included in such a list, so let them know how you feel and go out and vote!