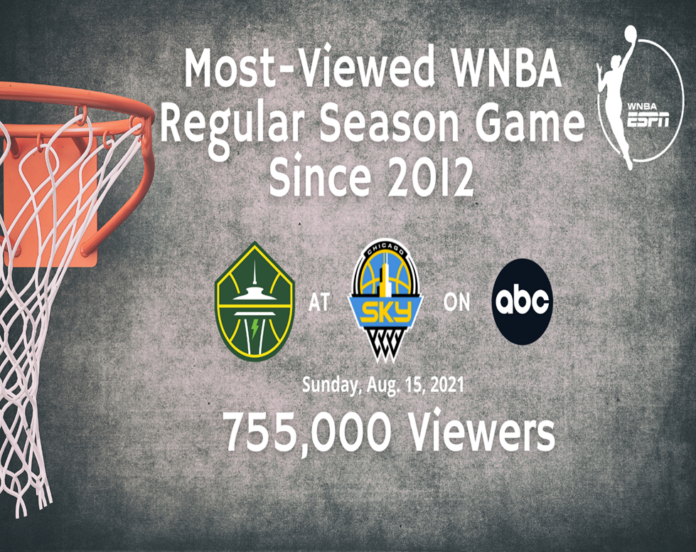 On August 15th, the WNBA rocketed past viewership numbers since 2012 to reach a peak viewership of 755,000 viewers in a regular-season game. While this signals a bigger and positive trend in WNBA viewership, we can also look at some highlights of the game on Sunday to see why it attracted just so many viewers. In doing so, we can recognize and appreciate the talents of all the players on both the Seattle Storm and Chicago Sky that helped make such an exciting game happen.

Even though it was a regular-season game, that didn’t mean it was ordinary by any means. The Storm went into the game with a 16-5 record, while the Sky had a 10-10 record, making the Storm a clear favorite to come out on top. This expectation is only added to by the Storm’s all-star roster, with Jewell Loyd being an absolute force on the court and players like Breanna Stewart and Sue Bird filling out the team as rising stars and WNBA legends. However, with Sue Bird and Breanna Stewart resting because of their recent win at the Tokyo Olympics, the Chicago Sky was much closer to striking distance, and they took that momentum and ran with it.

Jewell Loyd, who had just come off a win at the Tokyo Olympics, was put in the difficult position of leading a depleted team to victory. While she came out with some amazing stats, such as 26 points and 5 rebounds during her 40 minutes of play, the Chicago Sky seemed to have more gas in the tank as a team. Players like Loyd and Ezi Magbebor, who scored an additional 21 points, were able to force overtime, but with only 5 seconds left, Loyd was forced to go in for a lay-up to tie the game, a play the Sky were able to defend to clutch out the game.

While an unfortunate loss for the usually dominant Storm, it’s not the end of the world; when two of your best players are on the bench, and you’re still able to force overtime, there’s no need to see gloom and doom in the situation. However, this shouldn’t discredit the Chicago Sky’s efforts, as they could work effectively as a team, relying on their starters and a deep bench to have consistent scoring power. If they continue to develop this team chemistry, surely their position in the WNBA rankings will only go up.

Finally, the excellent news of the high ratings for this wonderful game, with over 755,000 viewers in the regular season, is a great mark for the WNBA. While some may be cynical and attribute this to factors such as the U.S. Women’s Basketball performance at the Olympics, many of the main stars like Sue Bird and Breanna Stewart weren’t even playing in Sunday’s game. Instead, we got a fantastic basketball game that went down to the wire in overtime, and there should be no surprise that people would tune in for a spectacular showing like that. It’s fantastic progress for the WNBA and its players, and hopefully, this upward trend in viewership continues.

Unsung Presents: Music & The Movement On TV One

Ace Comic Con Stole The Show This Past Weekend