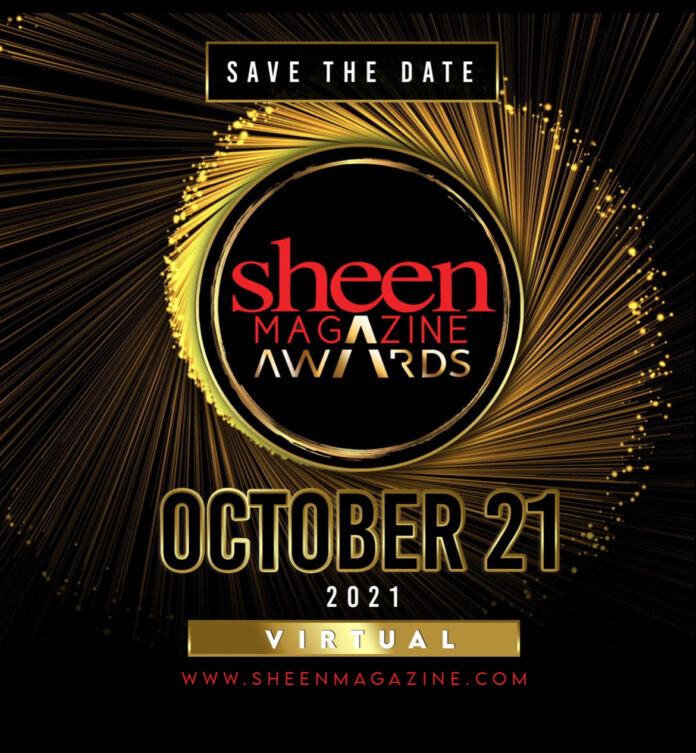 On October 21, at 8 p.m. ET/5 p.m. PT, the SHEEN Awards (previously the Kimmie Awards) will air on FOX SOUL, the Black community’s largest free streaming platform offering unabashedly Black entertainment 365 days a year. The 7th Annual SHEEN Awards will be a hybrid experience this year, with FOX SOUL broadcasting both pre-recorded segments and the official live after-party to comply with the highest COVID-19 guidelines.

“FOX SOUL’s audience aligns well with our community, reaching over 45 million viewers,” said SHEEN Magazine Publisher William P. Chapman, III. Founder of SHEEN Magazine, Mrs. Kimberly Chapman, added, “FOX SOUL celebrates the black culture while dealing with real topics that impact the everyday lives of the black community that matches the vision I had in mind when I created SHEEN Magazine, especially in the beauty, fashion and entertainment industries.” FOX SOUL’s General Manager and Head of Programming, James DuBose, said, “I’m extremely proud of the strategic partnerships with top black creatives we have executed in the past year at FOX SOUL, including Sheen Magazine. We’re delighted to stream the SHEEN Awards and highlight ‘Black Excellence’ in their respective fields.”

An incredible team of your favorite well-known influencers will host the SHEEN Awards. Also, be prepared for an unbelievable performance by rising star singer/songwriter Muni Long (co-writer of Rihanna’s “California King Bed,” Pitbull and Kesha’s “Timber,” Fifth Harmony’s “Worth It,” and Selena Gomez’s “Who Says” among others) and 2019 Fan-favorite R&B duo Ruff Endz is returning to grace the stage too. The newly formed Marketing and Production Division of SHEEN Magazine, SHEEN Media Group, will debut the SHEEN Soundstage Cypher featuring the brilliant talent performers from the 2020/2021 season. Honoring the 20-year career of legendary producer Zaytoven with the “Trailblazer Award” will also be part of the celebration. Last (but certainly not least), the winners from the national polls for “Creative Artist of the Year” in Hair, Beauty, Influencer, and Photography will be announced.

SHEEN Magazine is The Ultimate Beauty Guide for the modern-day woman and a preeminent voice within the beauty industry. Published bi-monthly, SHEEN Magazine has consistently proven to be a media influencer, able to provide the latest up-to-date news and current trends within, but not limited to, the world of beauty, fashion, hair, and entertainment. SHEEN strives to educate, motivate, and empower, reaffirming the importance of self-worth while encouraging its readership and audience to achieve their highest potential. Follow SHEEN Magazine on Twitter, Facebook, and Snapchat: @sheenmagazine. You may also connect on Instagram at @thesheenmagazine.

Over the past seven years, SHEEN Magazine’s annual award show has become one of the most celebrated events in Atlanta. Filled with fantastic entertainment, beauty/hair tutorials, fashion shows, entertainment discussions, and the like, this magical gala was created especially for SHEEN readers, partners, and investors. SHEEN Magazine’s founder Kimberly Chapman says, “We want our attendees to experience an unparalleled celebration. Our goal is to honor and cherish those who many times are overlooked for their life-changing, trend-setting, or charitable contributions.”

About FOX SOUL
FOX SOUL is the Black community’s premiere free streaming platform serving UNAPOLOGETICALLY BLACK, CONSUMABLE BY ALL entertainment around the clock to 44+ million viewers. With over 1,300 hours of live and interactive programming annually, FOX SOUL is home to some of the most iconic faces and voices of our culture: Cocktails with Queens hosted by Claudia Jordan, the award-winning FOX SOUL’s Black Report, the black filmmaker showcase known as FOX SOUL’s Screening Room hosted by Vivica A. Fox, The Book of Sean hosted by Dr. Sean McMillan, Business of Being Black with Tammi Mac, and more. For more information on FOX SOUL, visit YouTube and FOXSOUL.TV.

Subscribe to the ENSPIRE Magazine Newsletter to receive updates on the latest Entertainment and Community News and information on the upcoming “Be-Well” Print Edition.