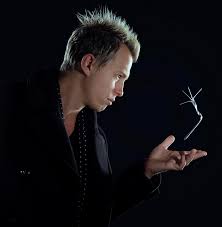 Kevin Nicholas, “Mentalist to the Stars,” is making a name for himself in the entertainment world with mind-blowing tricks and a unique, stylish flash with magic. He is not your average magician and has captivated audiences around the world because of his “magic touch,” which was dubbed by Dujour.

His dedication to the craft, constant practicing, and subsequent improvements has helped him create his own brand of magic known as “modern mentalism.” Many are left wide-eyed, speechless, and stunned after his performances. Following his high-end performances, many celebrities, fashion houses, and sports icons are left in awe, including Jimmy Fallon, Kate Hudson, Derek Jeter, Paris Hilton, and Michael Strahan.

Nicholas has always been interested in entertaining. Things changed when he was 14: “I watched an infomercial that taught magic and convinced my parents to purchase it. I learned the entire 50 plus tricks in a short time and performing them came very naturally to me. Magic and mentalism gave me the vehicle to entertain.”

His challenges are similar to what other live entertainers face. For Nicholas, he says that “we face challenges of having moments where we are incredibly busy as well as times when things slow down. When you are an entertainer, your audience dictates what they like or perceive sometimes before they have even experienced your show. Over the past 20 years of performing, I have grown from creating my ‌image in magic. I like to give my audience a different perspective of what mentalism and magic can look like.”

His advice is to make sure to “embrace the journey in all parts, the good and the hard.” Although there are a fair amount of challenges, it makes you value the good and allows him to grow into the entertainer he is today: “There’s a romance to the struggle that makes you appreciate the amazing times. It allowed me to reflect on what it took to get to the success that I have today. Think beyond just your art or magic but about what story you are trying to tell. For me, my show reflects who I am, my travels, and experiences to my style, my humor, and the material I perform. Think outside the box, and it is amazing how opportunities will follow.”

He has big plans for the future and changing how people view mentalism and magic. For Nicholas, his hopes range from his own journey in magic to television: “I hope to create a new image of mentalism and magic. With the success of media platforms, magicians and mentalists have become incredibly popular again. I hope to create a show that will allow me to travel more as well as make more television appearances.”

Through it all, Nicholas has persisted to keep doing what he loves. His journey has brought him all over, such as Manhattan, the Hamptons, Los Angeles, and all over the world. From performing in front of countless audiences and top celebrities, he also has partnered with top brands including Saint Laurent, Alexander Wang, and the New York Knicks and Yankees.

Whether or not you believe in magic, Kevin Nicholas’s illusions will leave you stunned and make you question if magic truly exists. His mantra he stays true to is what others should follow, no matter where their journey takes them: “Be true to who you are. The entertainment industry is a marathon, not a sprint. Enjoy all the moments, the victories, the struggles, and it’s going to be worth it.”

For more information on Nicholas’s magic, check out his website here.