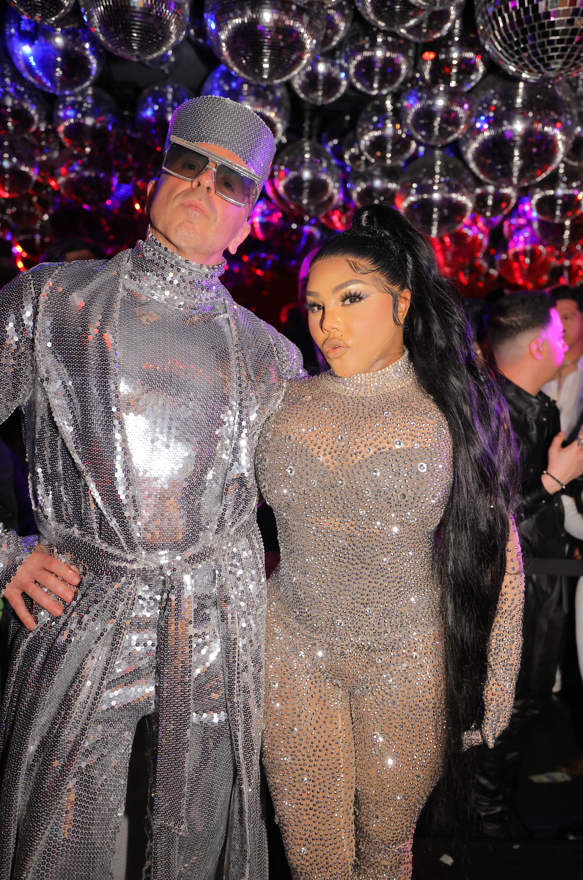 The invite-only crowd danced the night away to sounds by DJ MOS and DJ Kiss, with a surprise performance by rapper Lil’ Kim under the dancefloor’s 400 disco balls. The event is the last of a series of invite-only pre-opening nights before the highly anticipated re-opening of the club to the public on Friday, March 18th with the kickoff of LoveSexy – an open-format night celebrating music from all genres. On Thursdays, ongoing concept IT in partnership with leading Los Angeles presenter Framework will bring unexpected line-ups and exciting new experiences each week.

Legendary Damon made his first appearance for the night striding through the crowd while throwing $100 bills emblazoned with his image. Near 1 am Damon entered Sunset on a platform encased in colorful lights pulsing with the music as he rapped with surprise performer Lil’ Kim came out from behind a curtain to join him. Lil’ Kim stepped onto the dancefloor’s stage to perform hits: No Time, Queen Bitch, Big Momma Thang, Crush on You & No Matter What They Say.

Under the creative direction of Studio 54 co-founder, Ian Schrager, and in the spirit of the dozens of iconic clubs that dotted the sunset strip in the 60s and 70s, Sunset is a modern clubhouse with a dedication to great music beneath The West Hollywood EDITION. Designed for multiple experiences, the destination offers a cocktail bar and lounge, a private room that invokes the feeling of a speakeasy, and LA’s most raucous dance floor beneath 400 disco balls.

The West Hollywood EDITION is located on the corner of West Sunset Boulevard and North Doheny Drive, where West Hollywood meets Beverly Hills. With architecture by John Pawson and interior design by Ian Schrager, the hotel features 190 guest rooms, including 48 suites and 2 penthouses, and over 6,500 square feet of meeting and event space as well as 20 luxury residences. Helmed by Michelin-starred chef John Fraser, the hotel’s culinary program boasts sophisticated dining including the plant-forward signature restaurant Ardor and the rooftop bar and lounge, The Roof. The Lobby Bar, a gathering place for guests and West Hollywood locals alike, features bespoke creations and classic libations with a modern approach. Found In the basement of The West Hollywood EDITION, Sunset is a modern sophisticated clubhouse, offering a modern take on Studio 54 by Ian Schrager. With a focus on wellness, mindfulness, and beauty from within, The Spa at The West Hollywood EDITION offers restorative treatments and services and a curated retail shop stocking California-inspired products. Guests of the hotel also enjoy access to a 24/7 gym featuring state-of-the-art equipment, weekend yoga classes, and a stunning rooftop pool.

For more information about The West Hollywood EDITION click here.