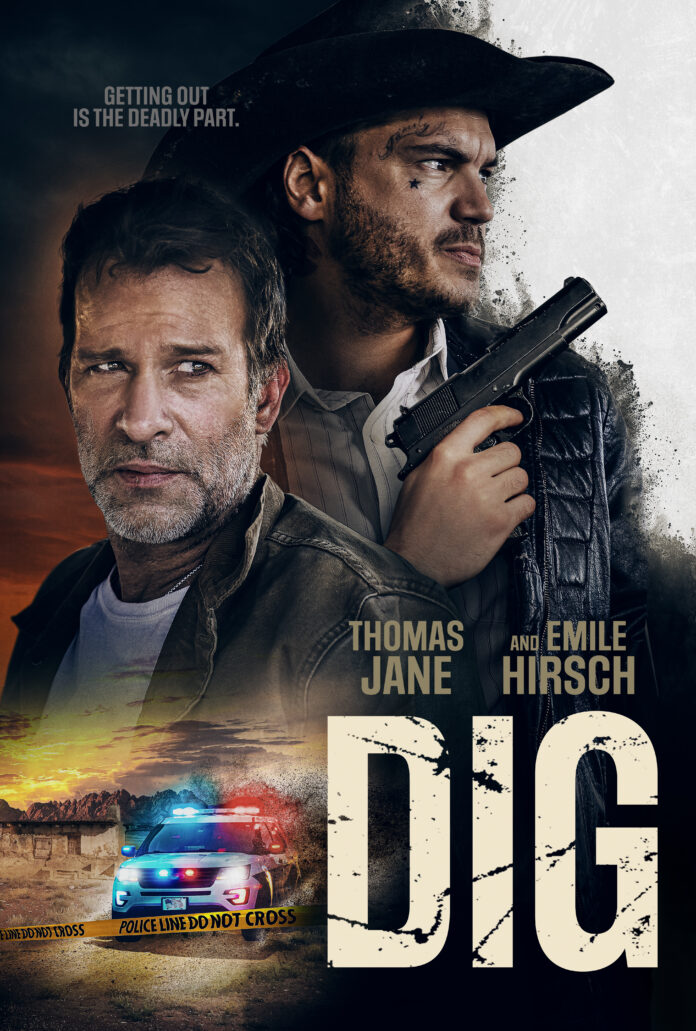 In collaboration with Lionsgate, Saban Films’ upcoming thriller Dig immediately seeps viewers in suspense and refuses to relent until the closing credits roll. Director K. Asher Levin, best known for Slayers (2022), The Shadow Diaries (2020), and Cougars Inc. (2011), brings the debut screenplay of Banipal Ablakhad and Benhur Ablakhad to cinematic life with the help of a spectacular cast and eclectic soundtrack.

The film’s central four actors are Thomas Jane, Harlow Jane, Liana Liberato, and Emile Hirsch. Prior to starring in Dig Thomas Jane delivered powerful portrayals in The Thin Red Line (1998), Deep Blue Sea (1999), and The Mist (2007). His real-life daughter, Harlow Jane plays his on-screen daughter in the film and has previously appeared in UNICEF: Imagine (2014), Texas Rising (2015), and I love Us (2021). Liana Liberato is best known for her portrayal of Annie in Trust (2010) and Kim in If I Stay (2014). Emile Hirsch, perhaps the most recognizable name in the Dig cast, is best known for his starring roles in The Girl Next Door (2004), Speed Racer (2008), Into the Wild (2014), and plays a villainous protagonist with believable ease.

The film’s underscoring soundtrack is lively and immerses the viewer into the plot effectively. The chaotic combination of rapid bluegrass-hued tunes and somber ballads takes hold of the viewer and syncs with each plot twist to help thwart every expectation.

While attempting to repair a life shattered by the tragic death of his wife, Steve Brennan (Thomas Jane) and his deaf and resentful daughter Jane (Harlow Jane) struggle to mend their fractured relationship. After accepting a high-paying demolition job, Brennan relocates to a rural New Mexico sprawl with his daughter in tow. Immediately after arriving, their situation takes a twisted turn when they are held hostage by a dangerous couple who will stop at absolutely nothing to retrieve what is buried beneath the property. In order to survive, the estranged father-daughter duo must work together and rely on one another to outwit their captors and escape with their lives.

Dig was released in selected theaters and On-Demand (VOD) on Tuesday (Sep. 23). Check out the trailer below!

Learn How to Live Your Best Boss Girl Life With CLEO...