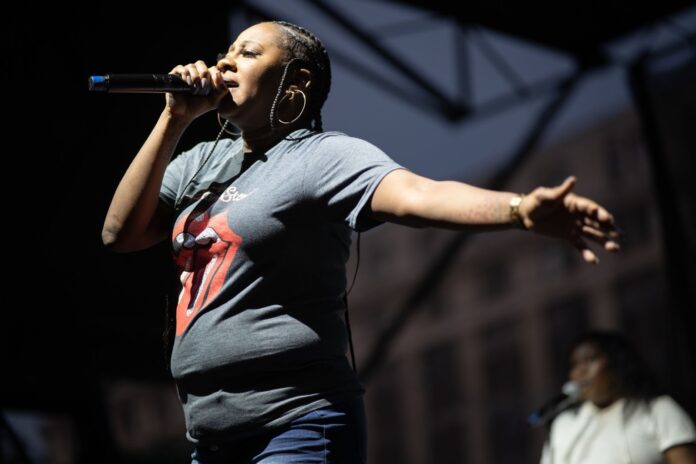 Newark hosted a week of free outdoor concerts, from July 27 – August 8. The Festival opened with “Gospel in the Park.”  Gospel In The Park was headlined by Stellar Award-winning singer, Le’Andria Johnson. The star of Oxygen’s Real Preachers of Atlanta’s closed the concert by coming down from the stage and walking the park. She spread the gospel to attendees reminiscent of tent revivals in the Black Church Tradition.

Gospel In The Park hosts were, Rev. Kevin E. Taylor, of Unity Fellowship Church of Newark and Newark city councilwoman, Louise Scott-Rountree. Scott is a Newark native growing up in the landmarked and historic Krueger-Scott mansion.

The annual festival is the largest music experience rooted in traditions of African American and Afro-Caribbean diaspora in the Tri-State region. The festival has expanded to 50-60,000 international attendees that migrate over two weekends. They come to experience a variety of genres including Jazz, Gospel, Hip-Hop, Rhythm & Blues, Reggae, Soca, and many more. The festival also includes film, tech, and music business education.

The Lincoln Park Coast Cultural District (LPCCD) is the non-profit that organizes the festival. They are also engaged in the practice of economic development through Creative Placemaking. The organization’s mission is to plan, design, and develop a comprehensive arts and cultural district in downtown Newark. LPCCD’s main programs are Lincoln Park Music Speaks, the Lincoln Park Jazzy Soul music series, the Lincoln Park Sustainable Living Community Podcast, Lincoln Park Gallery Without Walls, and the music festival.

The other concerts in the series were: Rodney’s House: A Presentation of Rodney M. Gilbert, House of Music Day, Hip-Hop Culture Day, and The Soul of Lincoln Park.