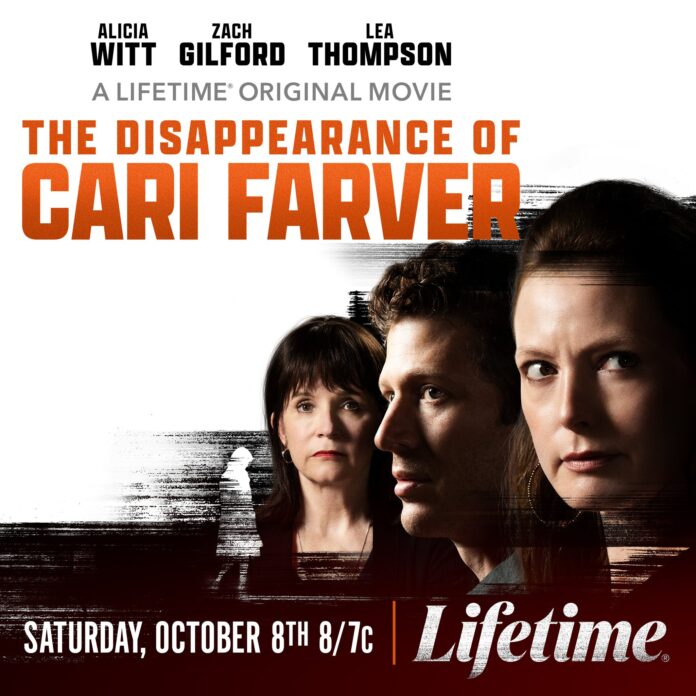 True crime fans were in for a real treat as The Disappearance of Cari Farver, a Milojo Productions original feature starring Alicia Witt, premiered on Lifetime on October 8th. Based on Leslie Rule’s bestselling crime novel A Tangled Web, the movie tells the true story of a distraught boyfriend (Dave Kroupa, played by Zach Gilford) as he receives demanding and concerning texts from his new girlfriend (Cari Farver, played by Rebecca Amzallag). After ending the relationship, Dave continues to receive disturbing messages from Cari, but the situation gets even crazier when his other ex-girlfriend (Liz, played by Alicia Witt), also begins receiving harassing texts from Cari, who has abruptly disappeared.

Meanwhile, Cari’s mother (Nacy, played by Lea Thompson) searches desperately for her missing daughter while putting pressure on the police department to assist in the investigation. In a story full of gut-wrenching twists and turns, viewers will remain plastered to their seats until shocking discoveries are made public at the very end.

ENSPIRE took part in a press conference with Alicia Witt and others involved in the production of The Disappearance of Cari Farver in order to learn more about Witt’s role in the film, her acting process, and the production of the feature‌.

The movie script, written by Tawnya Bhattacharya and Ali Laventhol (Bel Air, My Life with the Walter Boys), adheres to the facts of the real case, and the writers drew heavily from Leslie Rule’s novel in order to relay the truth. It was “a gift to be able to use [the book] as inspiration”, said Witt when asked about the significance of source material when preparing for her role as Liz.

After receiving the script and delving into the filmmaking process, Alicia Witt recalls feeling astounded by the details of the true crime case: “It is easy to say, in retrospect, how did she get away with it?”

How does this cinematic depiction of the real case contribute to mental health discourse?

“The character that I portrayed [Liz] was not diagnosed as being bipolar. That was Cari Farker. The fact that she [Cari Farver] had been diagnosed with the disorder in the past played into the skepticism that the detectives had after her disappearance.”

How did you slip into this role and shake off a long day of shooting?

“This is something that I have learned to do over the years… it is so crucial for your mental health to not take the character home with you, especially the darker ones. It is just so important to keep up those boundaries in your own life. I had an experience with Al Pachino on set… he just said ‘you don’t have to get so amped up during this’” because “they are going to cut it up into little pieces” and internalizing that advice helped her be more authentic and truthful to the character that she was trying to portray.”

What were the most challenging and enjoyable parts of the process?

“Just how twisted the character was” caused Witt to wonder just “how much pain must she have been in to act this way?” Ultimately, she was a person in pain who was really craving love and connection,” shares Witt. But she “had no idea how to go about that in a healthy way.”

“The challenges were also my favorite. The two challenges I enjoyed the most were the scenes that were directly inspired by the videos that we had… it was a test to see how much I could emulate the real person in those scenes.”

To learn more about the true events depicted in The Disappearance of Cari Farver, get your copy of A Tangled Web and watch Alicia Witt’s sneak peek of the movie here! Follow Alicia Witt on Instagram and Twitter to keep up with her latest projects and future roles.