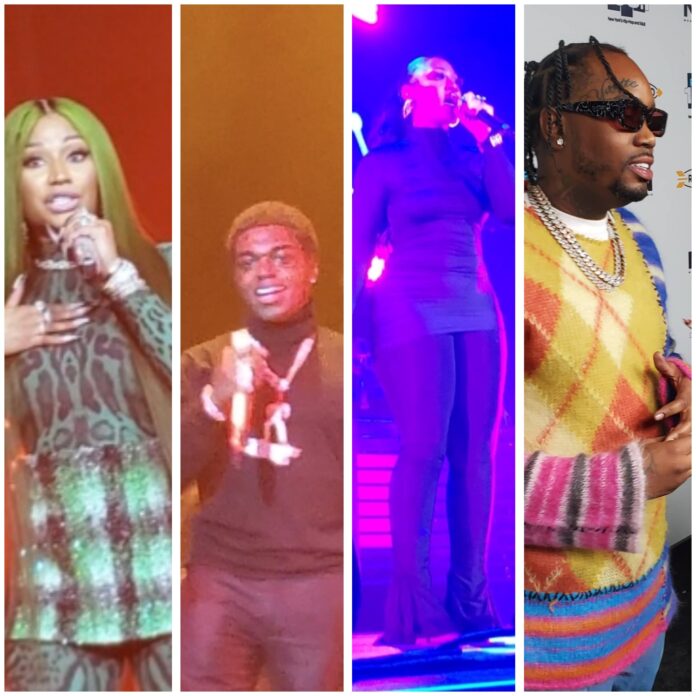 Power 105.1 of iHeartMedia, also known as “Home of the Breakfast Club and the Angie Martinez had a star-studded lineup for its 2022 Powerhouse concert produced by Live Nation on October 29th. The lineup included SpinKing and Friends, Tems, Fivio Foreign, Moneybagg Yo, Kodak Black, and Nicki Minaj. Power 105’s annual concert took place at the Prudential Center in New Jersey.

It was definitely an eventful night where DJ SpinKing had Rowdy Rebel, Juelz Santana, J.I. The Prince and B. Lovee were in the building. Juelz repped Harlem and hit the stage for a set. But then Moneybagg Yo played his hits, and the crowd loved it.

A notable moment included Fivio Foregin bringing out Capella Grey to perform his smash “Gyalis”. That song has been on everyone’s playlist since it hit the airwaves.

Tems was giving everyone what they needed serenading with her medley of hits and was celebrated on stage by Angela Yee for having a #1 hit song. Her team and RCA brought her plaque on stage to congratulate her on what she has accomplished musically.

Kodak Black did his thing on stage and was in awe of how much love he was getting from the New Jersey/New York crowd. But when Nicki Minaj got ready to perform the barbs were not playing! You can hear the crowd reciting all her lyrics louder than Nicki. It was a real dope moment to witness the love of her fans. During Nicki’s set she brought out 2 Chainz, and they performed the hit “Beez In the Trap”.

It was for sure a spectacular night. Check out some of our footage from the concert!