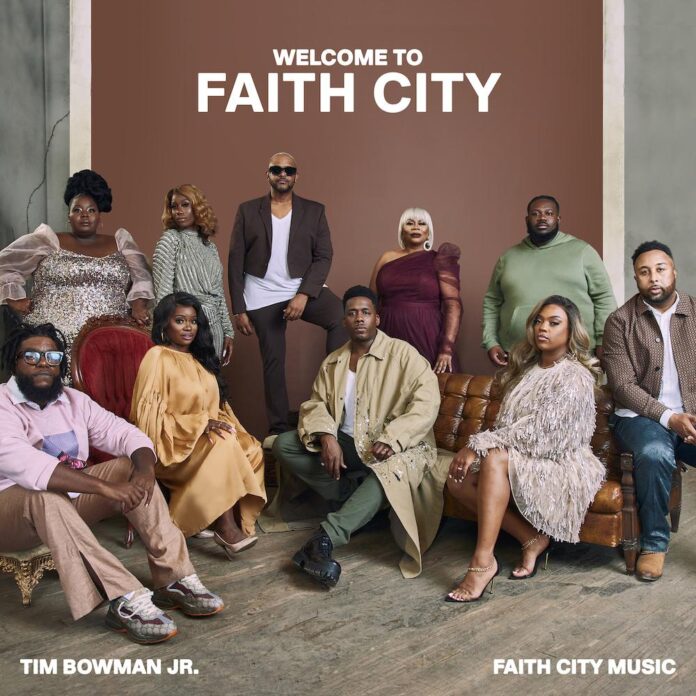 In partnership with Faith City Music, TRIBL Records celebrates the release of its new album “Welcome to Faith City” by GRAMMY, Dove, and Stellar Award-nominated artist Tim Bowman, Jr and Faith City Music. In this life-changing album, Bowman and Faith City seek to deconstruct and redefine the concept of worship. Faith City is bringing the listener into their world, providing them with a unique holy moment in each song. The album is available everywhere.

“Welcome to Faith City” includes powerhouse Le’Andria Johnson on “Jesus” in combination with elements of pop and rock. The vocals and instrumentals merge effortlessly to ensure everyone listening receives Jesus’ message. “Holy” mixes the old with the new, stirring together classic worship with R&B elements. Kierra’s ad-libs throughout drive the message home. “Here All the Time” displays the group’s versatility, switching from country to pop. Tim Bowman Jr. and Maranda Curtis remind everyone that the things we need to win at life are already here.

Tim Bowman Jr. is the son of the famous jazz guitarist Tim Bowman and the nephew of gospel artist Vickie Winans. Bowman began his career in 2012 with “Beautiful” released by Trippin’ N’ Rhythm Records. He has since won Grammy, Dove, and Stellar Awards. Bowman and his wife Brelyn were ordained as pastors at Spirit of Faith Church, based in Maryland. One might recognize Spirit of Faith for its lead pastors Mike and DeeDee Freeman.

Faith City Music is a group consisting of several immensely talented and influential faith leaders; they are M.K. Ngenge, Le’Andria Johnson, Sara Mia, Kierra Sheard-Kelly, Malcolm Brown, Eden Williams, Maranda Curtis, PJay Edmund Derrick Millard, and Bri Babineaux. The musical group has won many awards, such as Le’Andria Johnson, who won BET’s Sunday Best and a Grammy in 2012 for Best Gospel/Contemporary Christian Music Performance. Kierra Sheard-Kelly is a success across many disciplines, most notably as a gospel singer known for her hit single “You Don’t Know.” Further, Maranda Curtis has been nominated for several Stellar Awards and Dove Awards.

Listen to “Holy” below: