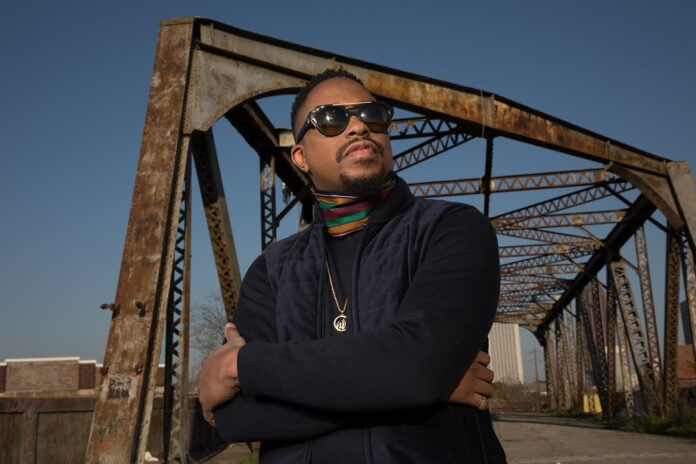 Three-time Grammy Nominated and 2019 NAACP Outstanding Male Artist nominee, singer, songwriter, producer, actor and last but not least, philanthropic-pioneer, RAHEEM DEVAUGHN prepare for the release of his seventh studio album, “The Love Reunion“. The anticipated album will be globally released on June 28th, 2019, via the SRG/DMG label imprint.

“The Love Reunion” is led by the already Top 15 Billboard Chart hit single, “Just Right” (Testify), written by Raheem DeVaughn and produced by Tim Kelley (one half of the multi-award winning producers, Tim & Bob). “Just Right is an infectious anthem composed to celebrate not only women of black and brown color but all women globally,” mentions Raheem. On Saturday, July 6th, Raheem will take over Center Stage at the 25th ESSENCE Music Festival in New Orleans.

“Although this is album number seven that we’re calling The Love Reunion,” says RAHEEM of his surprise second release in eight months, “it’s a part-two to Decade of a Love King, which just came out in October. I never stop making music; I’m still working on finding new ways to use my instrument, so the best way to do that is to stay in the studio…that’s my refuge, my therapy and my sanity. [So] this Decade of a Love King trilogy has a lot of different tones and variations in it. When people go through albums six, seven, eight, and maybe nine and ten, they’re gonna be like `Wow, he gave us some real hardcore, new millennial R&B!’”

When three-time Grammy-nominated, soul-induced singer/songwriter RAHEEM DEVAUGHN makes a seemingly audacious musical promise; whether you want to hold him to his word, consider his word bond or regard his word as good as gold, given his impressive track record for consistently engaging musical quality amongst his faithful, steadily-growing audience, one could safely surmise that ultimately he’s always a man of his word. Hence, after professing that he had enough music in the can for the “next ten to fifteen years” upon the release of his fall 2018-released “Decade of a Love King” set, longtime followers had no idea what they were in store for. “Although this is album number seven that we’re calling The Love Reunion,” says RAHEEM of his surprise second release in eight months, “it’s a part-two to Decade of a Love King, which just came out in October. I never stop making music; I’m still working on finding new ways to use my instrument, so the best way to do that is to stay in the studio…that’s my refuge, my therapy and my sanity. [So] this Decade of a Love King trilogy has a lot of different tones and variations in it. When people go through albums six, seven, eight, and maybe nine and ten, they’re gonna be like `Wow, he gave us some real hardcore, new millennial R&B!’”

Hence, hot on the heels of the Top 5 Billboard Adult R&B success of his smooth-n-sultry “Don’t Come Easy” and it’s easy-groovin’ “What It Feels Like” follow-up single, The Love Reunion arrives just in time for summer with a seamless, effective balance of sound-expanding upbeat grooves alongside his signature scintillatingly sexy love grooves. “I would say it’s half summer, half winter,” DeVaughn muses about the prospect of The Love Reunion transcending seasons with infectious melodies and grooves that’ll guide us from hot summer days to the more cozy cooler months. “So half of the album is definitely a summer album, and then there’s a winter album too. It’s like in the 90s when you had those Jodeci albums where the slow jams are back to back to back…but just enough.” Most effectively setting the stage for the roll-out of The Love Reunion is the swirling, hypnotic premiere single “Just Right (aka Testify)” which puts the spotlight on his soaring, breathy vocals over an aurally enchanting downtempo love groove core fans are most familiar with. “Well, the voice is like an instrument,” RAHEEM says, while explaining the vocal showcase that results from this Tim Kelley-produced (of 90s hit-makers Tim & Bob fame) first single. “And technically I don’t play guitar, cello or keys, so singing and vocal arranging is my way of playing an instrument. I’ve been looking to pull this record out of myself…just this vibe, kind of like the `wedding song of the year.’ It’s an undeniable record. I feel like as artists we wait for that song, and `Just Right’ is that song for me. I feel like it’s a career-changing record for me.” In fact, change and musical evolution prove to be key winning elements on The Love Reunion, as there proves to be several sonic surprises and excursions in between the smoothed-out lo-fi/urban R&B head-noddin’ “Everything A Go” set opener and the cool, jazzy R&B bump of “Joyful Noise (aka The Chill AF Remix),” the set’s closer. Jumping straight out of the pack with the potential of exposing RAHEEM to an even wider audience are the immediately catchy “Kissed By the Sun,” a dreamy bump-n-whine laced with his racy come-ons; the steamy-n-bouncy reggaeton/R&B mash-up of “Magnet” (featuring Edley Shine formerly of Born Jamericans) and his uncharacteristically dark, hard-edged “Heaven On Earth.”

“One of my favorites is `Kissed By the Sun,’ which is like an Afro-beat rhythm,” he illustrates. “That’s like me just introducing my audience to a new genre of music that I wanna tap into, which is what I call `Afro-soul.’ So you can expect more of those records from me in the future. I’m starting to collaborate with artists abroad in places like South Africa, Ghana and Nigeria. Bob Marley and reggae have been a big influence on me whether people know it or not. So a record like `Magnet’ [I feel] may be one of the biggest records on the album in terms of global reach. So I’m expanding my brand and my sound.” He sets the complete vibe for the slow-drivin’ Prince-reminiscent latter track, his brooding R&B/rock-fused “Heaven On Earth,” which he muses as “the Christian Grey in me…like the `fifty shades of Raheem.’ That’s like one of those `burn the incense’ things. And you know the world is becoming a `cannabis-friendly’ place, so you crack that bottle under a black light and get `wit it.’” Aurally enchanting elsewhere on The Love Reunion are his signature stellar ballads and slow jams core listeners have come to count on, from the multi-layered vocals and classic R&B grind of the Prince-hued “Rose Gold” and the airy, mainstream-glossed R&B/pop flow of “California King Size Bed,” to his warm, sensuously upfront “Black Girl Magic” and the rebirthed “please baby please” R&B tradition of the scintillating title track.

Mention how he manages to sweetly and melodically disguise some of his borderline risqué lyrics, like on the two aforementioned latter tracks, and he willingly responds with forthright confidence. “[Man] I said what I said and meant what I said,” he playfully clarifies. “If I said it, I meant it. My lyrics have always been like that; it’s raw emotion. It’s honest music. I never want my music to be referred to as `nasty’ lyrically. To me, I feel like it should be poetically or tastefully done. What comes out of my mouth is something I’m responsible for; I have to be accountable for that. But I wanna say some fly shit. I wanna say something that a man may be thinking for their mate, but they may not know how to put it in words. Or they might not be bold enough to say it. So for the brothers out there, I wanna give them something they can play and be like `Yo, this is how I feel about you.’ Or `this is what I wanna do with you.’ Or `this is what I wanna do to keep you.’ Or `this is how I fucked up. How can we fix this? I’m human. Maybe after I earn your trust again we can rebirth this love.’ That’s a love reunion!”

Already on board for this musically ambitious The Love Reunion is his faithful core audience who have followed his journey and listened to his artistry develop since the Maryland native arrived on the music scene with his Jive Records debut set, The Love Experience (2005). Having already paid his dues throughout the Washington, D.C.-area club circuit, RAHEEM (the son of veteran jazz cellist Abdul Wadud) achieved a major breakthrough with his sophomore release, 2008’s Love Behind the Melody, which not only hit #1 on Billboard’s Top 10 R&B/Hip-Hop Album charts, but garnered two Grammy nominations (Best R&B Song for “Customer;” Best Male R&B Vocal Performance for “Woman”), one BET Award and two BET J Virtual Awards (“Male Artist of the Year” and “Album of the Year”). 2010’s A Place Called Love Land maintained the momentum, earning him yet another Grammy nomination (“Best R&B Album of the Year”) and more popular singles (i.e., “You”). As the music industry landscape went through its changes, RAHEEM took the bold step of going independent and taking the reins of full creative control starting with the 2013 release of A Place Called Love Land and seamlessly continuing with 2015’s Love, Sex & Passion, which impressively charted at #1 on Billboard’s Top R&B/Hip-Hop Album charts, #2 on Billboard’s Independent Album chart and #31 on Billboard’s Top 200 chart. His trilogy-instigating Decade of a Love King continued that long-building momentum, resulting in two charts hits and a 2019 NAACP Image Award nomination for Outstanding Male Artist.

Yet with The Love Reunion set to become RAHEEM’s most widely received release to date, holding true to his artistry and authenticity of the R&B music that influenced shaped his life, as well as the lives of millions of others remain of the utmost importance to him. “There’s a lot of conversation about where R&B is, who’s making dope R&B or who the king of R&B is. So it’s like `What does it take to be king? What does it take to be mentioned as king among kings?’ So with me being one of the kings of R&B over the last fifteen years; my music, my performance on stage and my songwriting continue to grow [vocally], while I perfect my craft. It’s about showing and proving, and staying power…and really making a statement. It’s not about being number one and necessarily saying that I have to be crowned king, but more so like there have been periods in my career where I feel I have been overlooked. And that’s not a good feeling, so when that happens there’s only two ways to respond to that: Either you take it on the chin or you `show and prove.’ And I’m a `show and prove’ kind of person…and having fun doing it.” Suffice to say, our ears reap all the benefits as the musical legacy of RAHEEM DEVAUGHN continues to unfold.