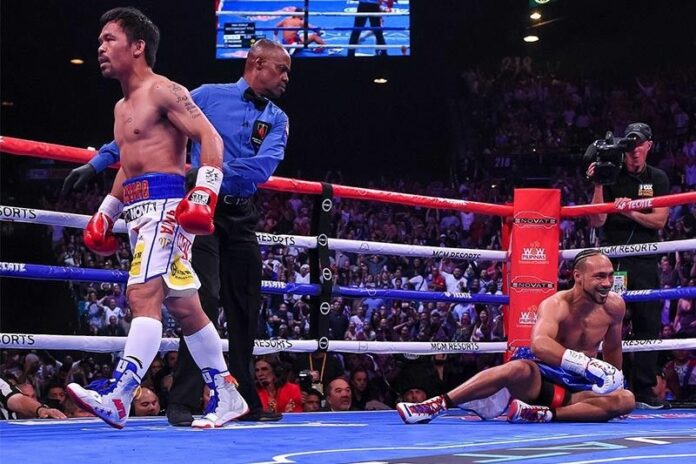 Manny Pacquiao stole the show on Saturday after defeating Keith Thurman and ending his undefeated streak. Both fighters had their moments in this fight and it was Pacman who set the tone in the first round dropping Thurman with a 1-2 jab on the chin.

Thurman rallied after the knockdown, but Manny was the aggressor throwing vicious body shots that Thurman had no answer for the first five rounds. However, after the sixth round, age started showing and that was when Thurman took advantage of Manny.

Thurman kept throwing jabs and kept pushing the pace of the fight. Manny looked tired and in the seventh round, it looked like Manny was taking too many shots to the face. Thurman had Manny on the ropes, but could not knock him down to the canvas.

In the 10th round, Manny set up Thurman with a massive body shot and had Thurman staggering and his knees buckling, but he was saved by the bell.

The last two rounds, both fighters were gassed out and try to through more hooks and jabs at each other, but there was no power as some of the punches landed.

Two judges scored the cards 115-112 in favor of Manny, while the other judge had scored the card 114-113. Even though Thurman threw more punches and had more power punches, the judges felt like Manny was the aggressor.

With getting the victory over Thurman, Manny has become the oldest Welterweight champion winning the title at 40 years old.