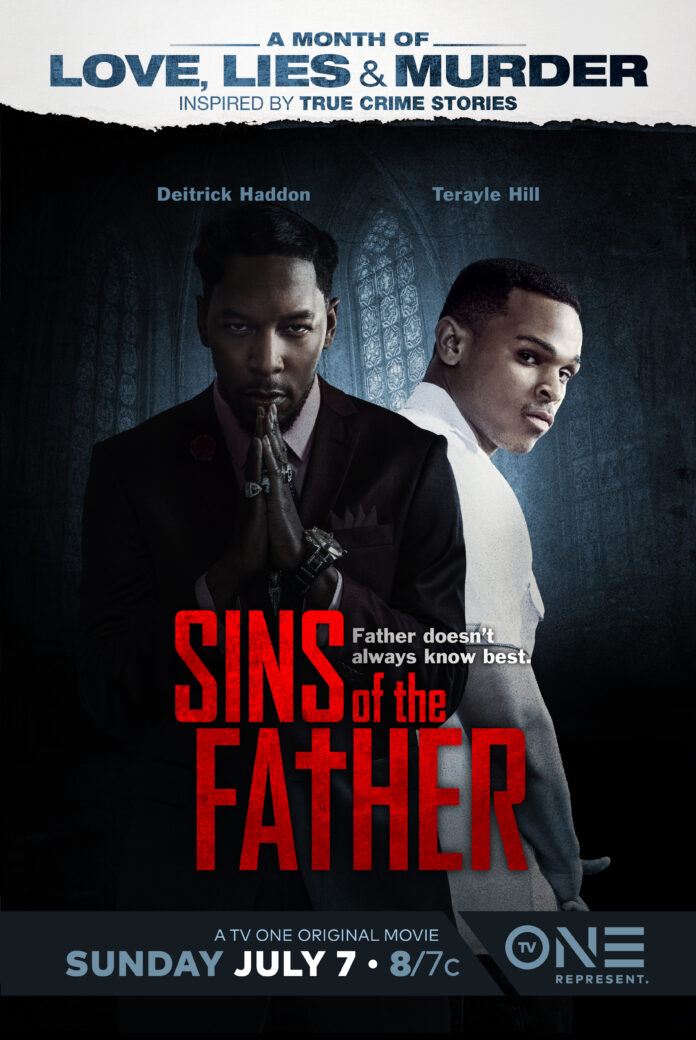 TV One’s original film SINS OF THE FATHER premiered Sunday, July 7 at 8 P.M./7C. The film stars Deitrick Haddon (The Gospel), A.J. Johnson (Baby Boy), Clifton Powell (Ray), Terayle Hill (Merry Wishmas), Angela Davis (I Feel Pretty) and Danny Pardo (SEAL Team). SINS OF THE FATHER is the first movie to kick off TV One’s month of LOVE, LIES & MURDER films which features a series of stories that explore the dark side of love including deceit, betrayal, obsession, and jealousy. Inspired by TV One’s true crime programming, SINS OF THE FATHER follows Detectives Phylicia Richardson (Johnson) and Perez (Pardo) as they investigate the vicious murder of first lady Karen Burnett (Davis), the beloved wife of Pastor Clarence Burnett (Haddon). The crime sends shock waves through the couple’s close-knit Atlanta community and the police are forced to take a deeper look into the Burnett’s inner circle, including Pastor Burnett’s son Robert Banks (Hill).  As the interrogation unfolds, family secrets of abuse, infidelity, lust, and cruelty are revealed within the Burnett household. The detectives soon discover that the ungodly actions of one person can have a deadly impact on many.

“In a culture where #ChurchHurt has been the trending topic, this film will give the viewer insight on how wolves in sheep’s clothing operate,” said gospel artist and film star Haddon. “Buckle your seatbelt because it’s about to get real!”SINS OF THE FATHER is written by Katrina O’Gilvie and directed by Jamal Hill, with Leah Daniels-Butler and George Pierre as Casting Directors. The film was produced by Swirl Films, with Eric Tomosunas serving as Executive Producer. Keith Neal, James Seppelfrick, Ron Robinson and Darien Baldwin serve as producers. For TV One, Karen Peterkin is the Executive Producer in Charge of Production, Donyell McCullough is Senior Director of Talent & Casting, and Brigitte McCray is Senior Vice President of Original Programming and Production.

Check out some clips from Sins Of The Father

African America, A Film On Race, And the American Dream