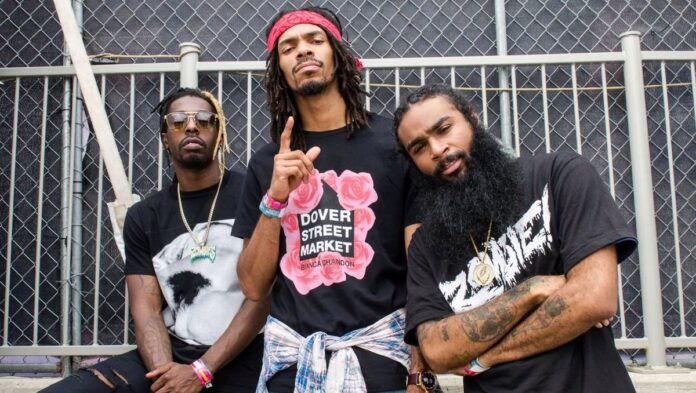 If you’re looking for more black artists to support during this time, Flatbush Zombies is worth checking out. Not only have they been creating incredibly hype, with original tracks since 2010, but they have also been supporting the Black Lives Matter movement through their music and recent donations.

Flatbush Zombies is a hip hop trio from the Flatbush area in Brooklyn, New York. The group is comprised of members Meechy Darko, Zombie Juice, and Erick Arc Elliott who have known each other since grade school. They currently have three albums released which have received much success and publicity due to their unique psychedelic sound and their many collaborations with well-known artists such as RZA, ASAP Mob and Juicy J. There is no doubt that the trio is on the rise, especially with the release of their new EP, Now, More Than Ever.

Now, More Than Ever was released on June 5th with the intent for fans to enjoy new tracks while in quarantine. When the Black Lives Matter protests began, Flatbush Zombies put out a statement saying that they are donating 100% of the net profits made from their new line of merch to their choice of three charities: Black Emotional and Mental Health (BEAM), Equality for Flatbush, and Everybody Eats.

With the extremely fitting name of Now, More Than Ever, the EP has seen great success, as has their initiative to raise money through their merchandise sales. After just one hour, every piece of merch was sold out. After just one day, Flatbush Zombies had raised $100,000 for charity. They plan on restocking and continuing to donate all net proceeds for their chosen charities.

Flatbush put it best when they explained their desired goal in their press statement. “There is a fight going on outside. They are coming for our hearts, minds, and souls. Black bodies are under attack… It’s time for each one of us to find a way to step up. This is how our family can show up right now.”

To view their full statement or to buy merchandise, visit their website here.