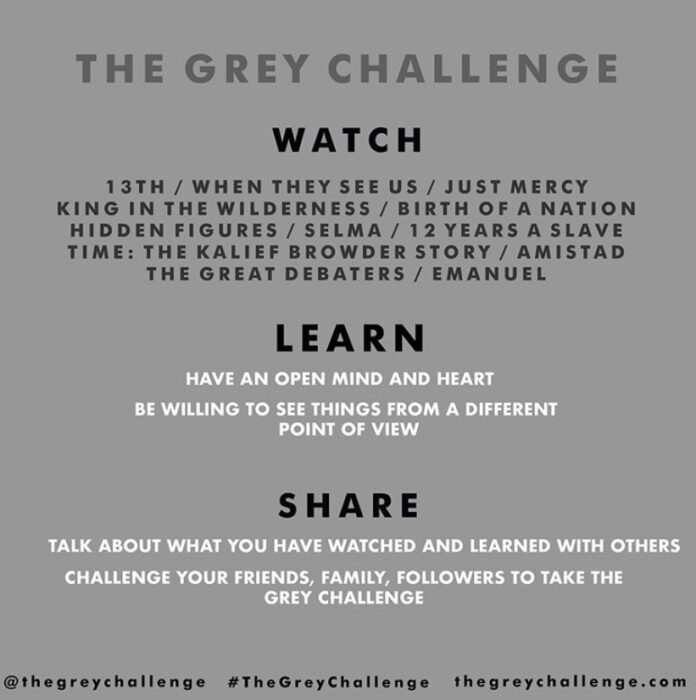 With a major historical movement going on right outside of our homes, many people who are not as informed or directly involved may have questions about what they can do to help. Racism has been a prevalent issue since before the founding of our nation. The people who are sitting idly by and denying that these protests have importance are either blinded by privilege, uneducated, or both. Many white people have taken to social media to show their support of the Black Lives Matter movement, asking questions and sharing resources. As a reaction, influential people such as NBA players Garret Temple and Anthony Tolliver, Hoops and Christ founder Chauncey Hollingsworth, founder of Active Faith Lanny Smith and rapper David “Dee-1” Augustin have created a social media “challenge” to inspire people to delve into their own research to answer their own questions.

The Grey Challenge, an effort to encourage white people who have questions to educate themselves on the experience of black people in America, has recently launched on Instagram. The trend invites people to watch twelve films that portray the racism and racial injustice that black people have been subjected to. The thought process behind this was that movies evoke empathy and provide a deeper understanding. Film and media entertainment has been a universal connector since its creation, bringing people together to experience the same range of emotions. By watching these specifically-chosen films, there is a hope that not only will people’s questions be answered, but there will be an understanding of black people’s adverse experiences throughout history. People should be angry. It is the 21st century, and there are humans still being treated as if it were the 19th century. This challenge is meant to make people want to create change.

The twelve films from this challenge are all equally as important and have similar messages, just different contents and contexts. Among these films, two films stand out in the sense that they almost directly relate to where we are in society today. Selma (2014) and 13th (2016) both have themes that we are seeing right now.

Selma depicts black people fighting for the right to vote in Selma, Alabama in 1965, which is important to revisit as we are in an election year. The film follows Martin Luther King Jr. as he leads peaceful marches in Selma with the intent to gain traction for voting rights and less violence. Nonetheless, the protests turn continuously more violent as police and political leaders actively work against King and his followers. The mistreatment of and aggression towards African Americans by people who are meant to protect them makes this an extremely difficult movie to watch. It has many parallels to what we are seeing in the streets today. King’s influence and ability to unite people in times of struggle are evident throughout the film. It shows the importance of unity towards a cause and emphasizes just how long black people have been fighting for equality.

13th is a documentary about the mass incarceration of black people for minuscule or non-existent crimes, which we are still seeing today. When the civil war ended, people began to use the loophole of the 13th amendment, which states that no person can be held as a slave, unless they are a criminal. The film goes deeper into the different ways that police and prison systems changed laws to target black people so they would be easier to arrest. Between the political War on Drugs, hyper-segregating cities, taking away the possibility of parole and political campaigns playing on people’s fear, the justice system has been and still is, extremely racist. This film is important to watch because a major goal of the protests is to change the criminal justice system in America. These messages have been ingrained into politics, media, and everything we know since the beginning. It’s time that we open our eyes to them.

As a white person, you can never feel what black people have felt. You can never understand their struggles in America. But what you can do is educate yourself. You can support your fellow human beings by using the privilege that you have to speak up about the changes that need to occur so that racial injustice can become an issue of the past. We want to raise our children in a society where everyone is accepted and given equal opportunities and treatment regardless of the color of their skin or what their background is. It is crucial to share these films. Challenge your friends to participate and educate themselves. Spread love, acceptance, and knowledge. Leave hate in the dust.