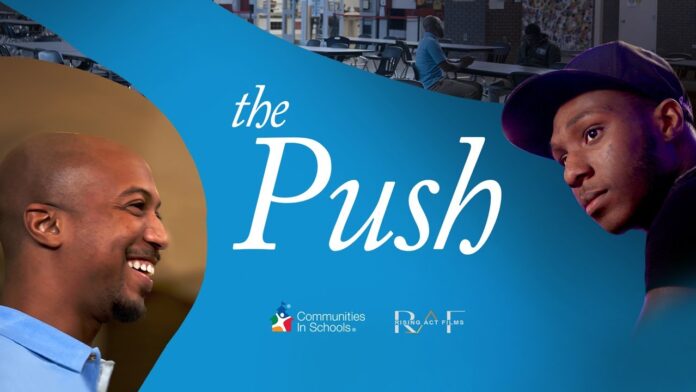 Throughout history, students of the minority population have struggled to get the materials and support that they need in order to reach their full potential and pursue a path leading to their future success. The students who could not find support within their school and surrounding community often thought about or immediately turned towards derailing their lives. As the years went on, however, each state recognized these students and moved toward the efforts that would benefit these students. On September 23, a 22-minute documentary covering the life of a could-have-been high school dropout, Ja-Mez, was released by the Communities In Schools Organization (CIS) demonstrating Atlanta’s approach to reaching the students through the organization.

The CIS documentary, The Push, is a Rising Act Film that follows the life of Ja-Mez as he built a relationship with Darrell Smith, Communities in Schools site coordinator. Ja-Mez endured the effects of a tragic event during his childhood that left him with feelings of helplessness and derailment. His feelings worsened as he matured and shaped a negatively impacted future for himself. He entered Stone Mountain High School with the sole emotion of hatred for the environment and the individuals he encountered daily. Eventually, Ja-Mez’s actions caused him to be sent to a different school for a semester. Upon his arrival back to Stone Mountain, he was met with CIS’ Darrell Smith whose life goal was to “ help deter students from making the same mistakes that (he) had in the past…”.

Similarly to Smith’s goal, Communities In Schools strives to be “all in it to help kids be successful” with roadblocks they may encounter. The Atlanta chapter of the organization was established in 1972 and has become the nation’s largest dropout prevention network through the outreach of its founder Bill Miliken. CIS has shown its impact across the states by tremendously impacting graduation rates for the better. The process that the organization follows to leave a positive impact on their students consists of bringing adults that care about the students’ emotions on a deeper level into the schools in order to spark the impact. These same adults then create an environment that allows students who are at risk of dropping out to have a second chance at being grounded in their learning.

Throughout the short film, Ja-Mez explains to viewers how Smith became a ‘big brother’ figure in his life rather than just staying as a mentor figure. The belief of CIS is that every student deserves the chance to have someone in their life that will push them to be the best that they can be, regardless of their situation, while also staying by their side every step of the way.

To watch the documentary or learn more about the relationship between Ja-Mez and Darrell Smith, click the above video or click here.

Signature Bride Partners With WebWed Mobile to Award $10,000 Wedding and...