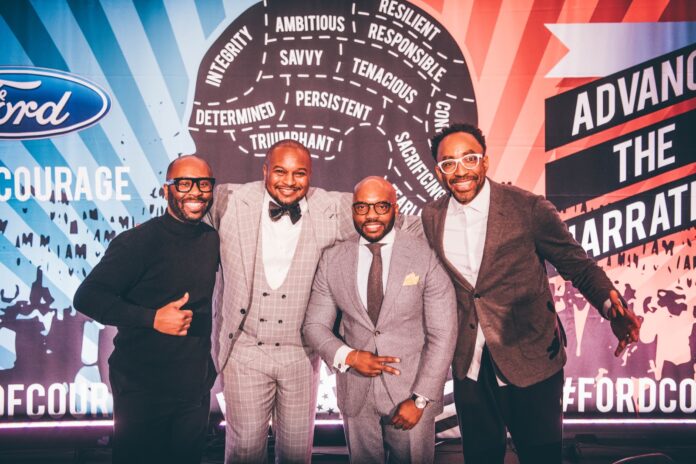 The Charles H. Wright Museum of African American History and Ford Motor Company has announced the opening of the ‘Men of Change: Power. Triumph. Truth.’ The exhibition is open to the public starting on Sunday, October 10th.

Created by the Smithsonian Institution Traveling Exhibition Service (SITES), Men of Change was possible with the help of the Ford Motor Company Fund, the automaker’s philanthropic arm, and revolutionary men such as Muhammad Ali, James Baldwin W.E.B. Du Bois and Kendrick Lamar. These men are believed to have altered the history and culture of the United States through politics, sports, science, entertainment, business, and religion. In addition, each biography has original artwork by notable artists that highlight the subject’s legacy. Some people included are Nina Chanel Abney, Derrick Adams, Robert Pruitt, Tariku Shiferaw, and Devan Shimoyama.

“Ford Fund is proud to bring the ‘Men of Change’ exhibition to the heart of Detroit at the Wright Museum as we uplift and celebrate the many contributions of African American men to our society,” said Pamela Alexander, director of Community Development, Ford Motor Company Fund. “Its powerful displays of courage, leadership and transformation are not only present in the exhibit but in the everyday lives of Black men.”

The Men of Courage Leadership forums were held in local communities as a companion event. It focuses on shifting the social-economic narrative of African American men through curated workshops and intimate discussions. In addition, it is designed to encourage and develop the personal brands, leadership skills, and entrepreneurial endeavors of participants. Jonathan Wilkins leads the forum. He is the CEO of Rebrand Cities Hajj Flemings and a former NFL Chaplain and does much more.

Curated leadership forums have been held in popular cities around the United States for the past six years. These forums included national stakeholders such as Community Activist Shaka Senghor and NFL Hall of Famer Jerome Bettis. The latest Detroit Men of Courage Leadership Forum took place on October 8th at the Wright Museum.

The invitation-only event is attended by an intergenerational group of community stakeholders, youth, and other thought leaders nominated by the community. A highlight of the forum was the “State of the Black Man” panel discussion featuring Michigan Lieutenant Governor Garlin Gilchrist, keynote speaker, and entrepreneur Ryan Wilson and other notable African American leaders.

“Men of Change: Power. Triumph. Truth.” opens to the public Sunday, Oct. 10th, at the Wright Museum, 315 E. Warren Ave. in Detroit. Tickets are $15 for adults and $12 for children with general admission. Online reservations for timed entry are required. For more information, visit The Charles H. Wright Museum here.