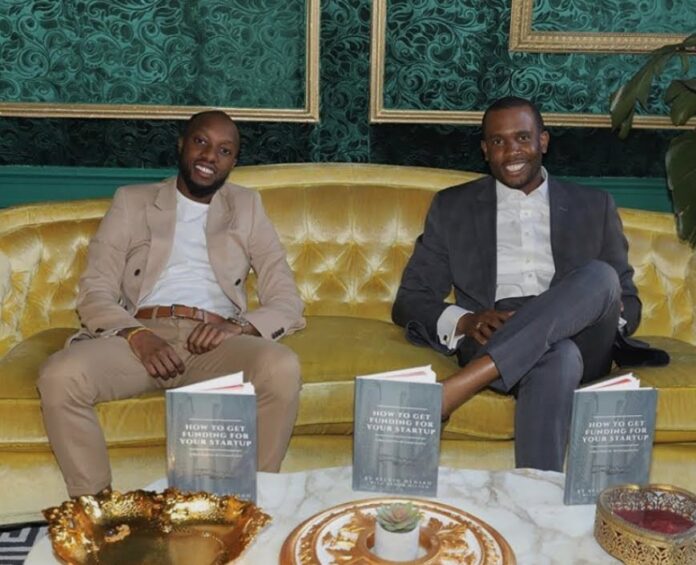 ( ENSPIRE Feature ) Aaron Wilson and Kelvin “PJ Kev” Mensah Have Co-Authored the ebook, “How To Get Funding For Your Startup” To Teach Others What They Have Learned Along the Way as Young Black Businessmen

Private jet broker Kelvin “PJ Kev” Mensah along with serial business entrepreneur and host of the “Level up Up Podcast” Aaron Wilson released a critically acclaimed book entitled “How To Get Funding For Your Startup.” The book is a tool for entrepreneurs to utilize as a guide to build business proposals and secure an investment from prospective investors. The two released the book in February 2020 and has received praise from multi-platinum recording rap artist Meek Mill, as well as Philadelphia 76ers owner Micheal Rubin. During times where the masses have more time to allocate attention toward business ventures, tools like this book would certainly be a “make” or “break” for entrepreneurs.

The tool is to bridge an “information gap” for individuals that are entrepreneurs, small business owners, and professionals from all socioeconomic classes and provide them with access to resources and information that successful entrepreneurs and venture capitalists have used to grow their businesses quickly. Soon after the release of “How To Get Funding For Your Start-Up”, Aaron Wilson released his solo project, “Level Up Pocket Consultant”, a tool for entrepreneurs and executives that assists with enhancing and scaling their business functions, such as marketing, sales, business models, and etc. The critically-acclaimed book has received high-rated reviews from business world experts, USA Today, and Yahoo News.

Kelvin “PJ Kev” Mensah has secured his standing as one of the youngest and most well-known private jet brokers in the world. Servicing high-net-worth individuals spanning across media and entertainment, the sports industry, and corporate America, the serial entrepreneur has been acknowledged as one of the travel industry’s rising stars. With an unparalleled presence in North America, the United Kingdom, and West Africa, Kelvin has chartered 100+ private jets in 2019 and shows no sign of slowing down on his road to success.

His passion for the industry took a new form right before college as he aimed to carve out a career path and enter a market none of his colleagues had had success in. “I didn’t even know what I was doing in the beginning,” Kelvin humbly admits, but he knew he didn’t want to settle for mediocrity. Within his first year of moving to Los Angeles, the luxury brand innovator reached out to a good portion of his like-minded contacts and kept knocking on doors until he secured his first job with a brokerage company. Five years later, Kelvin is now an esteemed private jet broker and technology executive.

Aaron Wilson is a business consultant and author, with a primary focus on assisting entrepreneurs with starting and scaling their businesses. He is the founder of Wilson Talent Solutions Inc., which is a business consulting firm that supports clients across an array of functional areas, which includes but is not limited to Business Strategy & Business Growth, Career Coaching, Executive Coaching, Sales Training, Entrepreneurship, and Qualitative Product Development.

Aaron Wilson has had extensive experience working with companies that range in size from the startup stage to established Fortune 500 corporations. Aaron’s impressive skill set was no longer a secret after 2016 when he made his first appearance on the big screen in Chris LaVoie’s London-based “Art of Recruiting” documentary, where Aaron was highlighted as one of the top recruiting professionals in the world.

Aaron has become the “go-to” expert for many founders & founding teams. As host of the “Level Up Podcast” on the Bleav Network, founder of Wilson Talent Solutions, author of “How To Get Funding For Your Startup” and “Level Up Pocket Consultant, he has built a strong reputation for himself in the business world as a business consultant and coach for business founders and teams.

What led you two into becoming business partners?

“It’s a very, very unique kind of scenario,” says Aaron Wilson. “I actually met Kelvin when I became a strategic adviser to the CEO of Vomos, a mobile application from a tech company that focuses on the luxury transportation industry. The app helps you to discover luxury rentals ranging from chartering private jets, yachts, and exotic cars. I was initially brought on board in this strategic advisory capacity to the CEO, but while I was there, I began working with Kelvin as well. Eventually, I was asked to become a partner to this organization, and at the same time began working with Kelvin on some business endeavors of his own. So, I transitioned into a business manager for Kelvin at some point and everything was going well, but Kelvin really just had a desire to broaden his aspirations in terms of entrepreneurship and wanting to start and open different businesses. So we took his brand to the next level, and moved forward with turning it into an LLC, and started building a portfolio of ventures. And so it kind of transitioned from just business management to operating as a business partner as well.”

I see you’ve released a book together entitled “How to Get Funding for Your Startup, could you tell us how the book came to fruition?

“When you take a look at entrepreneurship, often a lot of members of our community are typically just sticking to real estate, or owning a restaurant or building a barbershop or salon, and has never been given the opportunity to get involved in technology. No one’s been given the opportunity or knowledge to find investors for their company and to find investors who’d be able to “seed” their operation or provide capital to their operation. The primary reason is that our community is just not privy to the information that you’ll need in order to go out there and actively seek investors. So, there was a poll that was conducted on Instagram where Kev basically identified the missing link that people wanted and needed, and that was that they wanted to know how to raise money for companies that they wanted to start and scale, and they wanted to do it more than just in an entrepreneurial capacity, but more so from a venture capitalist perspective, where it was highly scalable. So we decided to write an extremely technical book, which is technical in terms of the approach, but something that was apprehensive because it was broken down in such a simple fashion, whereas someone who may not necessarily be as business savvy would be able to understand the ability and the reason by the steps that need to be taken to create a business proposal or business plan.”

Do you plan to release further entrepreneurship tools or programs together?

“Kelvin and I are partners at venture capital firm and we’ve partnered with some really remarkable people in the investment space who’ve raised over $100 million dollars in capital before, as well as athletes that are into the technology space and some remarkable individuals who have sold companies.”

“Kelvin and I will be starting a webinar series soon. And in addition to that, we’re also going to be working on getting an internship program together for aspiring business professionals, entrepreneurs, and individuals who are in undergrad who are looking for hands-on experience.  This is because we execute an array of deals and transactions on a monthly basis anywhere within the aviation sector to marketing branding to consulting services as well as consumer products. So the goal is really to continue to bridge that information gap and afford individuals who are really earnest and hungry.”

For future entrepreneurs that are on the road to success, what would you say is the most important skill to have when maximizing your potential?

“The most important skill to have in maximizing your potential is the ability to actually master always remaining organized,” says Aaron. “It sounds cliche, but some people don’t understand the root of organization, and it doesn’t just come from having a desk at your office or making your bed every morning, which is a great habit and it does actually put you into regimented mindset, but organization in the terms of, if you have an idea, you need to write it down. And once you write that idea down, you need to then create corresponding action steps that you should put into materializing that idea. Because without those action steps, it’s just an idea.

“And there’s a key thing you want to remember if not anything else. When someone runs an idea by you or asks you to do something and it sounds great, ask yourself, “Is this just a good conversation, or is this a good idea?” And the key differentiating factor between that is, is this profitable? How much money is this going to take from me? How much money will I make from it and how quickly will I be able to make back the money that I lost in the process? And it’s so important to think like that because there are people who have great ideas on a daily basis, but the idea doesn’t come to fruition. It’s important to differentiate between a good conversation and a good business idea, but it all starts with writing things down. And that’s the first thing that you need to do. Because it’s that much further away from reality if it doesn’t actually hit the paper. If it’s all in your head, then it’s just a thought.”

To learn more about where to purchase their released ebook entitled, “How To Get Funding For Your Startup” and Aaron Wilson’s solo book project “Level Up Pocket Consultant”, please visit www.pjkev.com/how-to-get-funding-for-your-startup-ebook and www.wilsontalentsolutions.com/level-up-pocket-consultant.

To learn more about Aaron Wilson and Kelvin “PJ Kev” Mensah, please visit their websites at www.pjkev.com and www.wilsontalentsolutions.com, and follow them on social media at @pjkev and @amwilson on Instagram.