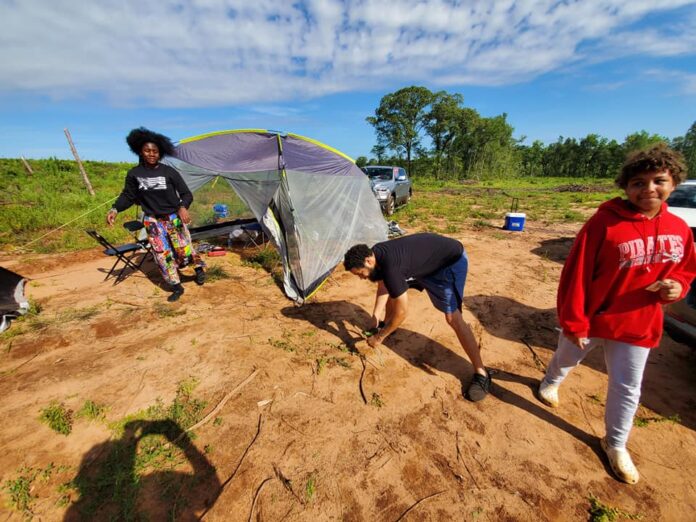 Renee Walters and Ashley Scott are turning ambition into action. The President and Vice-President of The Freedom Georgia Initiative have just purchased 96.71 acres of land in Toomsboro, Georgia to be converted into what they hope will be a safe haven for black families across the country. Their mission is to combat the unjust political climate and racial tensions in the United States by creating a space for black people and the collective BIPOC community to thrive.

Walters and Scott found their paths intertwined after meeting each other at church and learning they shared similar interests, and they have been best friends for the past six years. However, since the unfortunate events of the murder of Breyonna Taylor, Rayshard Brooks, and Ahmad Arbery, both visionaries experienced racial trauma, causing Ashley, who has a realtor and marketing background, to sought out a therapist. This was an opportunity for the mother of a black son and wife to a black man, to find mental/emotional clarity and a solution on how to move forward. And then Renee, who was told she may never walk again after experiencing a 15-foot fall the attic in 2013, and who also is a mother of a black son and wife to a black husband, built up uncontrollable anxiety, leading her to want to find a solution as well. Together, the two founded their investment group, the Freedom Georgia Initiative, recruited a team of black investors, and purchased the land on July 24, 2020.

Though still in its early stages of development, the Toomsboro land opens the doors to providing hundreds of black families a place where they can flourish. The Freedom Georgia Initiative outlines their goals: “building generational wealth, a new Black Wall Street, establishing homesteads and planned neighborhoods, vacation homes, and outdoor amenities.” Walters and Scott also promise that the land will be environmentally sustainable and promote self-sufficiency and wellness.

The two entrepreneurs bought the land with the principles of cooperative economics, where multiple people come together under a single business and merge their own resources to create a unified community. “We chose this as the foundation to be a model for others, to demonstrate we, especially black folk, can effectively work together,” said Walters. The community’s success, therefore, depends heavily on the fulfillment of individual responsibilities and the honesty and democracy of its people.

This field of economics has been prominent in African American communities for generations, with a prime example being the Underground Railroad, where the sharing of resources allowed joint success amid the violence and social inequities towards black people. Scott declared that “in the tradition of our ancestors Marcus Garvey, Malcolm X, Martin Luther King, Madame CJ Walker, and the pioneers of Tulsa’s Black Wall Street, we wanted to see our loved ones, our beloved community, and our business partners thrive together and build something self-sufficient.”

The road to success has not come without its fair share of trials, however. Scott explains how the company has received many bigoted comments since their project’s takeoff, telling them to “drop the love our neighbor ideology” and stressing the stigma that black people cannot work together. This, coupled with the unrest of the current political climate, has only served as fuel to the fire. “We had a sense that we would be able to utilize the momentum of the protests and the pandemic to do something monumental for our members. . . if we just made the move and believed that our vision would manifest,” said the duo. “We wanted to do our part to do what we can to create safe spaces for black faces and their allies.”

The Freedom Georgia Initiative has kicked off their new land purchase with an event they hope will become a tradition. BIG BLACK Campout is an opportunity for black families from all over the world to come together on the property, camping out in their RVs and tents and bonding as a community. Walters and Scott have also set up a Go Fund Me, asking for contributions of $8 or $88 to reach their goal of raising $88,000. The potential for the land is boundless, and Walters and Scott look forward to its growth in the coming years and relish the opportunity to give back, acre by acre.