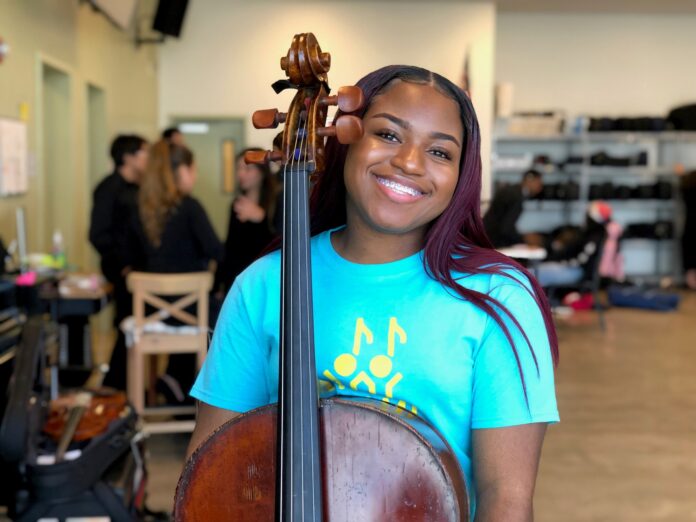 Starina D’Haiti has come far from her humble roots. When the 2010 earthquake in Haiti forced her and her family to leave their home of Port-au-Prince, D’Haiti found herself in a new and unfamiliar country. Remembering her mother’s advice, D’Haiti realized that in order to find success in the States, she would need a way to distinguish herself from her peers. D’Haiti’s search for that peculiar trait or skill within herself is what first began her journey into the world of music, which would lead her to become a proud alumnus of the Miami Music Project.

Reaching success was not easy, particularly after everything she had been through. Upon losing her home to the earthquake, D’Haiti suffered from depression and developed anxiety and PTSD. Her trauma caused her to be quiet and reserved, and she often found it difficult to speak up and express herself.

However, things changed for D’Haiti when she joined the Miami Music Project, a nonprofit organization that helps children reach their potential through the study and performance of music. Founded in 2008, the program has since become a national model for music education, having transformed the lives of over 30,000 children in Miami-Dade county.

When D’Haiti joined the program, she not only learned to play the cello, but gained a way to overcome her trauma. For her, the instrument became a means to escape her pain and to express her voice in a way she could not before.

“No matter what I may be going through, whether it be if I’m crying or if I’m happy it’s just always there for me,” D’Haiti said. “When I play it almost feels as if nothing else exists, all my problems just go right out the window.”

D’Haiti has also had the continued support of the Miami Music Project, which she says has become like a second home to her. She has plenty of praise to give to her teachers, who were always there to inspire her and help push her to new heights.

“The staff that worked with us always gave us 110 percent,” D’Haiti said.

D’Haiti is only one of the many thousands of children that the Miami Music Project has managed to aid so far. With consistent support, the project could continue to change the lives of underprivileged youths living in Miami-Dade County. D’Haiti’s success story, in addition to being inspiring on its own, serves as a reminder of what is possible when the less fortunate are granted opportunities to pursue their passion.

It's Maddening That Big Sean's Colin Kaepernick Lyric was Censored in...

African Luxury Designer Heats Up the Runway With All Black Models...

UNCF "A Mind Is…" Hamptons Summer Benefit Raises over $200K