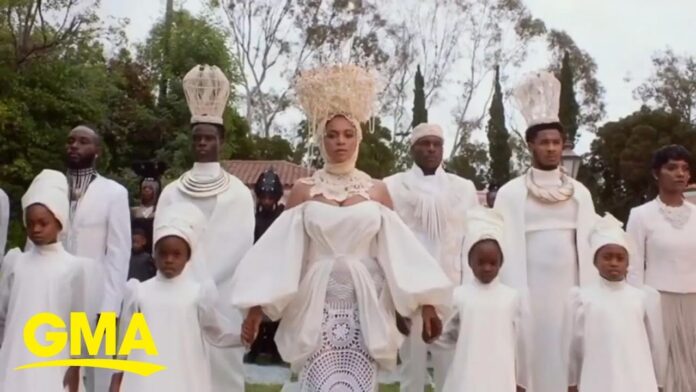 ( ENSPIRE Trending News ) Beyonce’s Black Is King Has Arrived With A Strong Debut.

Through Beyoncé’s devotional and creative lens, Black Art thrives within Black is King. In 80 minutes, she creates an Afrofuturistic journey for both her dedicated fans and new fans who will naturally gravitate toward Disney — and the nostalgic Black canon found on Disney Plus. After all, while in Destiny’s Child, Beyoncé ushered in early-2000s animated series The Proud Family by performing the show’s memorable theme song.

Beyoncé dedicated “Black Is King” to her son, Sir, but the entire Knowles-Carter empire is on front end display, featuring mostly in the “MOOD 4 EVA” segment. In a beautiful plush mansion, the film finds the musician adjoined by Jay-Z and flanked by white butlers, with one who even thoroughly brushes her diamond-encrusted grill.

Finding self-identity through the guidance of her ancestors, Beyoncé lays bare that celebrating Blackness isn’t just an appreciation of the past. Black Is King is a reclamation of a thriving future.