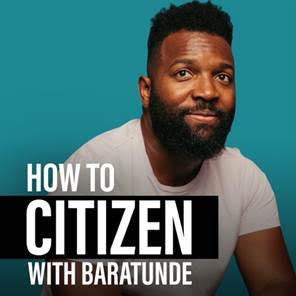 On Thursday, August 20 – Emmy-nominated host, writer, and producer Baratunde Thurston has launched his new podcast HOW TO CITIZEN WITH BARATUNDE in partnership with iHeartRadio. The first two episodes premiered on Thursday, August 27 in the iHeartRadio app, Apple Podcasts, or wherever you listen to podcasts.

Prelude: “Revolutionary Love is How to Citizen” with guest Valarie Kaur. In December 2016, activist, lawyer, and Sikh faith leader Valarie Kaur asked this question in her Prayer for America: “What if this darkness is not the darkness of the tomb, but the darkness of the womb? What if our America is not dead but a country still waiting to be born? What if the story of America is one long labor?” Nearly four years later, Baratunde could think of no better spiritual invocation for this show than a conversation with Valarie, the author of See No Stranger. In the premiere episode of this podcast, Baratunde and Valarie discuss the role of love, joy, and relationships in reimagining and reclaiming the act of being a citizen.

Episode 1: “Democracy Means People Power, Literally” with guest Eric Liu. Baratunde lays the foundation for How to Citizen. Eric Liu, the founder of Citizen University, schools us on power – what it is, who has it, and how the practice of citizenship is empty without this literacy. They also discuss how this power needs to be coupled with civic character to prevent us from becoming finely-skilled sociopaths. Eric answers questions from the live audience and Baratunde gives you some ways to practice understanding and using power.

Additional guests this season include: Dr. Phillip Atiba Goff, co-founder and CEO of the Center for Policing Equity, and a Professor of African-American Studies and Psychology at Yale University; Zachary Norris, Executive Director of the Ella Baker Center for Human Rights, author of WE KEEP US SAFE, and a former director of the Books Not Bars Campaign; Danielle Allen, A political theorist, Harvard University professor, director of the Edmond J. Safra Center for Ethics at Harvard, and author of multiple books; Amy Aminlari, MD, MPH, Emergency Medicine Physician and Co-founder of Coastal Family Urgent Care, and Co-founder of Last Mile PPE San Diego; José Andrés, World-renowned chef, founder of World Central Kitchen, and anti-hunger activist. There’s more to be announced! Episodes will be distributed by the iHeartPodcast Network every Thursday.

HOW TO CITIZEN WITH BARATUNDE reimagines the word “citizen” as a verb and reminds us how to wield our collective power. With humor and empathy, Baratunde explores societal topics that affect us all, speaks with people using their relationships and power for the benefit of the many, and offers audience members ways to participate. With so much media focused on what is wrong with our society, this show focuses on what is right and how to build on it. Our democratic experiment is up for grabs, and we the people will decide, through our action or inaction, where we go next. Episodes will be distributed by the iHeartPodcast Network every Thursday.

Baratunde Thurston is an Emmy-nominated host who has worked for THE ONION, produced for THE DAILY SHOW, advised the Obama White House, and wrote the New York Times bestseller HOW TO BE BLACK. He’s the executive producer and host of WE’RE HAVING A MOMENT, a limited-run podcast series that captures this defining moment of the pandemic, policing, and race in the U.S and the creator/host of the weekly pandemic show, LIVE ON LOCKDOWN. In 2019, he delivered what MSNBC’s Brian Williams called “one of the greatest TED talks of all time”. Right now, the writer, activist, and comedian is using his powerful voice to help people understand this revolutionary moment with his unique blend of criticism, humor, and optimism.

Listen to a Trailer for the series