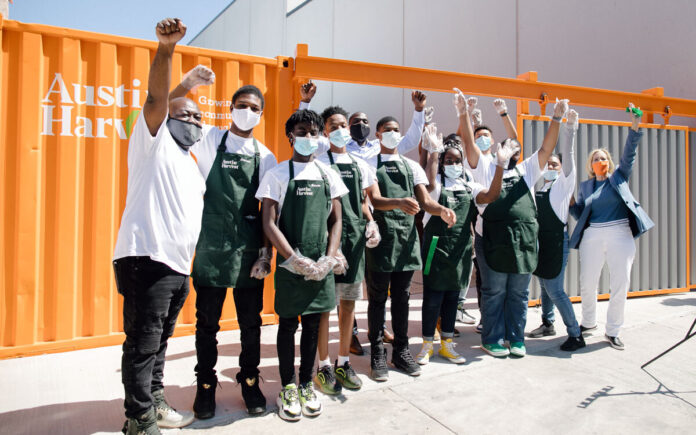 Young Teens from Austin, Chicago have turned a liquor store into a pop-up fresh market. The project, called Austin Harvest, is intended to last for 12 weeks in order to address food insecurity in Chicago’s second-largest community area. This is an important first step in addressing a legacy of city neglect and racism as well as powering through the pandemic that the teens hope will be echoed across the city.

The teens began the pop-up market in response to a series of listening circles that were hosted by their kids’ club, By the Hand Austin, amidst national protests over the murder of George Floyd. Central to the discussion was the food insecurity which plagues Austin after years of neglect and the recent looting of local business. The club cooperated with architects to make a layout for a temporary market to operate out of a defunct liquor store. As word got around that they were serious about the project, former Chicago Bear linebacker Sam Acho and other athletes from the area banded together to raise $500,000 to level the liquor store and pay for business expenses.

Since August 24th, the teens have manned the market from 3-6 PM Monday, Wednesday, and Friday. The project has been a 2-month work in progress but is already paying off for the teens and their surrounding community. In addition to providing affordable and organic food for their community, these teenagers are now getting internship offers from across the country in recognition of the hard labor and planning that has been put into this socially conscious project. The team plans to build a full grocery store in a brick-and-mortar building once the 12-week project has concluded. This would be a permanent establishment in the community, dedicated to addressing food scarcity in the area. With proper community investment, these young, entrepreneurial teens have taken great strides in enriching their community.

With the right kind of support, the leaders of tomorrow may very well step up today. These kids have golden ambitions and are bringing Austin in the right direction. To learn more about the project, visit By the Hand Austin or stop by on 423 N. Laramie Avenue.

Get Your Copy of ENSPIRE Magazine Today!