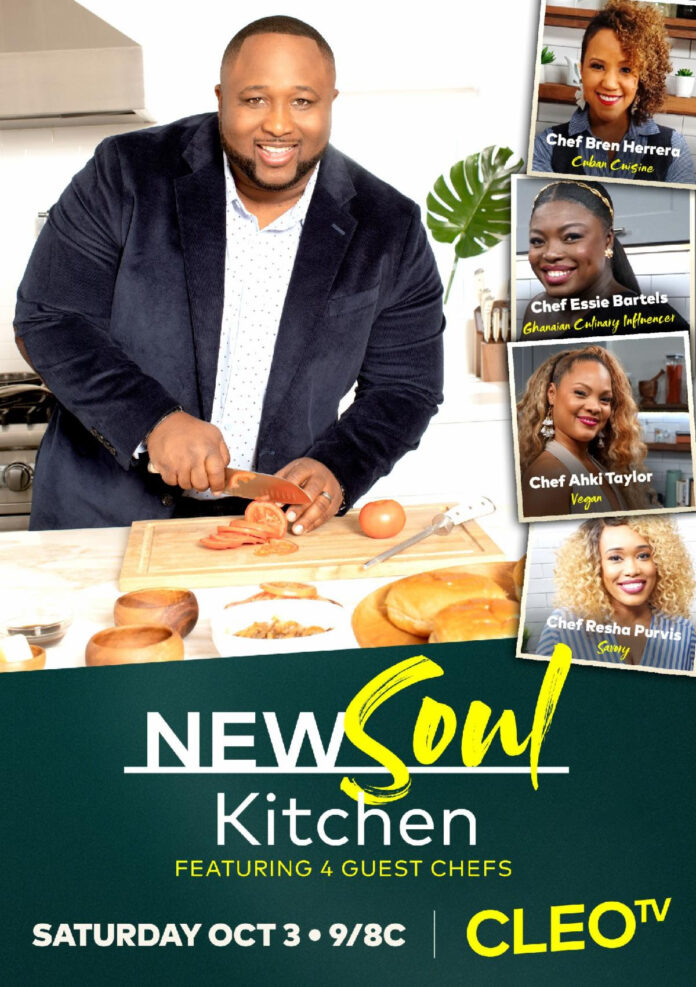 Highlighting an array of tastes from around the globe, “New Soul Kitchen’s” Chef Jernard pairs bold Latin flavors of seared Chimichurri Flank Steak and Cilantro Lime Black Beans with Afro-Cuban Chef Bren Herrera’s fragrant menu of Red Snapper Escovitch and Arroz Congri with Kidney Beans and Coconut Milk. In the following episode, Chef Jernard demonstrates his savory Shrimp and Chicken Gumbo while Chef Essie Bartels takes us on a journey through the exotic flavors of Ghana as she crafts the cultural staple, Jollof Rice paired with Fried Kelewele.

Each week, Chef Jernard welcomes one culinary guest including Chef Ahki Taylor, who specializes in Vegan Cuisine, Chef Bren Herrera, who gets spicy with her take on Latin fare, Chef Essie Bartels, who packs on the Ghanaian flavor, and Soul Food recipe developer Chef Resha Purvis, who shows off her Instagram-worthy treats. In each episode, these chefs join forces to whip up a feast while providing flavorful conversations on the side. In every episode, recorded pre-COVID-19, the culinary gurus explain their unique approaches to their favorite comfort foods, which are sure to inspire viewers to experiment as they continue to dine safely during the quarantine.

“New Soul Kitchen” is produced by Powerhouse Productions, with Rochelle Brown and Sonia Armstead serving as Executive Producers. For CLEO TV, Susan Henry and Gold Morgan serve as Executives in Charge of Production; Donyell Kennedy-McCullough is Senior Director of Talent & Casting, and Robyn Greene Arrington is Vice President of Original Programming and Production.

For more information about CLEO TV visit www.mycleo.tv and check out CLEO TV YouTube Channel. Viewers can also join the conversation by connecting via social media on Twitter, Instagram, and Facebook (@mycleotv) using the hashtag #CLEOTV.