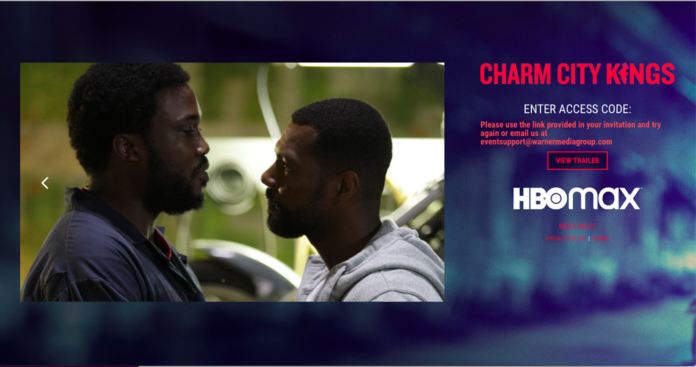 HBO MAX introduced Charm City Kings, winner of Sundance Film Festival’s U.S. Dramatic Special Jury Prize, with an exclusive three-day virtual premiere that was from Oct. 7-9, in support of B360, Color of Change, and the REFORM Alliance. Guests at the virtual premiere had the opportunity to watch panel discussions with the film’s cast from this year’s Urbanworld Film Festival and the NY Latino Film Festival.

Charm City Kings is about a Baltimore teen named Mouse, who has to choose between preparing for a future as a veterinarian and “getting money” in a dirt bike gang’s drug operation. Mouse is played by Jahi Di’Allo Winston, with other familiar faces, including artist Meek Mill and “If Beale Street Could Talk” alum Teyonah Parris. The film also had newcomer Marvin Raheem.

Raheem and Director of Charm City Kings Angel Manuel Soto met with moderator Jessica Perez at the NY Latino Film Festival, along with Winston who spoke with them virtually on the big screen. Soto explains how he worked with other writers to bring a coming of age story about a young kid in a subculture, which reflected off of his own experiences from living in Puerto Rico. “When I read this story I felt like they were telling the story of Puerto Rico as well … we always felt that Puerto Rico and Baltimore were almost the same. There’s a Baltimore in every major city in America. There’s a Baltimore in the middle of the Caribbean … this is the opportunity to not only tell my story but to tell the story of Baltimore with the people of Baltimore.”

Winston gives his take about being from Atlanta but gaining the knowledge of Baltimore and the culture. The film was recorded in West Baltimore, providing an authentic take of what it’s like living there. Raheem was able to get a role in the film after he showed up while the film production was shooting scenes and showcased his ability to ride a dirtbike. Although it was his first time acting, he was not willing to lose the chance of being on the big screen. During the production, Raheem received an acting coach and was given a permanent role in the film.

They describe how the film focused on the different alternative solutions to the situations that happen to them, including highlighting toxic masculinity and giving back to the community. Mouse has to achieve his goals, but he keeps pressuring himself into making decisions that he believes that a man would do. The famous line, “Riding a bike is about freedom not about flexing,” paved the meaning of success and what it means to be successful. “Now more than ever we live in a culture, where it is about showing off and trying to prove yourself to other people … we always miss the second part of success, which is significance … there has to be an internal goal at the end of the day,” Winston said.

The idea was to make the movie different from other films. The production came together to create an ending where the main character receives a second chance. The importance of the ending traced from Soto wanting to make the movie more inspirational for the younger generation. Most films tend to have endings that the viewers would know how it’s going to end. For Charm City Kings, however, there are realistic heartaches, but there’s always room for a person to receive a second chance.

VIP guests and press received a motorbike themed package, representing the city of Baltimore, where Charm City Kings takes place. Each wooden box has a one-of-a-kind art design showcasing well-known images reflecting “Charm City.” Inside the container, which was curated by Baltimore Artist and Filmmaker Akio Evans, were two custom hand-blown glasses with a bike chain link fused into the side. Baltimore mural artist Ernest Shaw was commissioned to create a painting called “CROSSING GODS,” inspired by the feature, using mixed media. The glasses were encased in a box wrapped with silver twine attached to a VIN tag reflecting the HBO MAX debut date.

The exclusive 3-day premiere has so many interviews and takes from the Charm City Kings production. A film on the city of Baltimore, along with people riding around on dirt bikes. Watching the mindset of how the film production wanted to bring awareness and tell stories to not only Baltimore but other cities like Baltimore brings a different reality of community and culture.

Cavier Coleman: Nothing But Net, Leather, and Suede