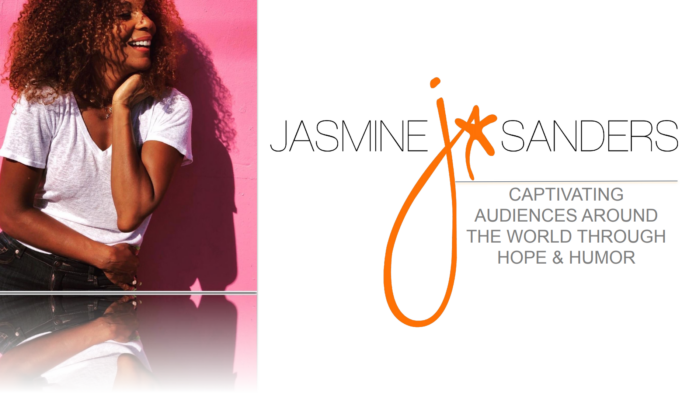 Jasmine Sanders, co-host of The D.L. Hughley Show, has an annual social media campaign, 30 Days of #AdoptedandWinning, as it will be Adoption Awareness Month, and she was adopted as well. The campaign has kicked off greatly in the past, and Jasmine is excited to educate so many via the social media platform.

Sanders is known for her experience as a host in various industries ranging in radio, television, entertainment, and large arenas of all kinds. She has been known for hosting amazing events such as the DL Hughley Friends and Family Tour and Radio One’s Women’s Empowerment Conference.

Tell us about your annual adoption campaign.

Each year, #AdoptedandWinning gives adoptees a chance to show off their accomplishments, and in the process, be an inspiration to fellow adoptees. Regardless of age, race, or sex, adoptees can show the world that their beginnings may not have been traditionally ideal, but it didn’t limit their potential. The primary goal is to obliterate the common narrative about adoptees being damaged beyond repair, unlovable or worthless, and replace it with the truth that we too are valuable and against odds can still be winners.

How do you plan to educate people via social media?

Adoptees are invited to show up and show out by sharing their personal video stories of adoption. We ask that they share as much as possible with complete transparency in order to actively relate to others that may be experiencing a similar situation. By doing so, we hope to connect with emotional stories, hard truths, and empirical facts. With so much misinformation available, it is important to be able to place a face with an actual story to educate and inspire others to speak out. It is my hope that these courageous stories will connect the dots for some and empower others to step out of the shadow of shame. Most importantly, destroy the myth that if your biological parents gave you up for adoption, something must be wrong with you. These personal journey stories are featured in tandem with informative interviews with experts in the system.

What makes the Adoption Campaign important to you?

It took years for me to admit out loud that I’m adopted. It was a secret that I had kept for most of my life.  The thought of talking about it to a stranger or even admitting it to a family member gave me anxiety. Even as an adult, it was still that thing I was never to speak of—not even an utterance. I created #AdoptedandWinning because I was tired of the shame. I was sick of being quiet and fed up with people believing that something must have been wrong with me to be have been given up for adoption. I know all too well the negative mindset that exists about adoptees being damaged goods or maniacal, especially amongst the African American community. This pervasive falsity has a detrimental impact on those of us who are adopted in terms of our emotional and mental well-being. After launching the campaign, I wasn’t shocked at the number of other adopted adults still keeping the “secret” and perpetuating the lie. It is sometimes easier to know a thing than to say it out loud. My hope is that this campaign has helped other adoptees come to terms with who they really are in order to experience a happier, authentic life. I’m, however, keenly aware that not all adoptees feel shame about their situation. But I figured one person is one too many. Adoptees need to see other adoptees winning and being proud rather than ashamed of their beginnings.

Why should it be important to others?

#AdoptedandWinning is important because it directly affects our communities. The intersectionality of data and stigma on the subject tell the story we all need to hear. Black and brown children (regardless of age) are disproportionately represented in the system. The stigma frequently associated with this group makes it even harder to convince would-be parents that with love and care these children can grow into healthy well-adjusted human beings. So, what happens to these kids who oftentimes are unadopted? They remain in the foster system until they “age out” at which point they can end up homeless. I think you can see where my point is headed. It’s my belief that the success stories shared thru #AdoptedandWinning can carve a different narrative about the effects of adoption and persuade parents to consider it as an option for having children.

How has the Adoption Campaign impacted your life?

This campaign has enriched my life in more ways than I could have never imagined. It has given me the opportunity to become more educated about adoption as well as make lifelong connections with other adoptees working to make changes to the current system. There is a lot of work that still needs to be done, but reading and watching the stories of other adoptees has reminded me that I am not alone. I have a village of digital family members who share my pain, joy, curiosity, and at times my frustrations. Providing a platform where they can give voice to their story has been one of my greatest joys.

Sanders is a determined woman who has a goal to spread awareness and educate people on adoption. Her annual Adoption Campaign is very important to her, but also many others as well. Jasmine does her part to help adoptees to share their experiences and to show any success they have in their lives to inspire others. She is compassionate about the work she does and is always working to better the campaign.

Jana Morrin Stands Up Against Workplace Harassment By Bringing Speakfully To...