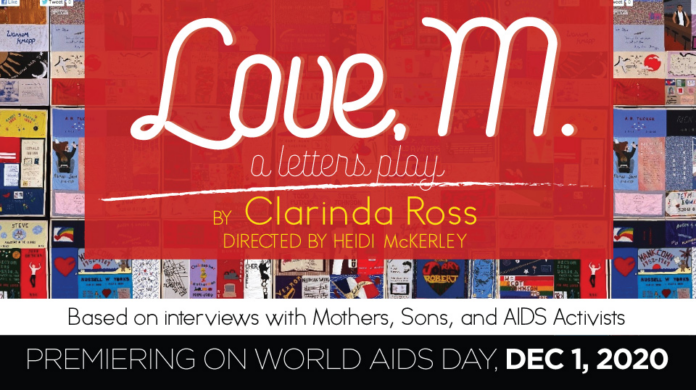 The evening will include a pre-show welcome, the play, in partnership with “Rolling Out Health IQ,” a post-show conversation, moderated by award-winning journalist Patrick L. Riley with guests, Lamman Rucker, Gabriel Maldonado, CEO of TruEvolution and former Obama appointee to the President’s Advisory Council on HIV/AIDS, mental health professional Dr. Shalondra K. Crawford and George M. Johnson, journalist and author of “All Boys Aren’t Born Blue.” Audiences can go to the “Love, M.” show page here to join the evening’s festivities via Horizon Theatre’s website, Facebook, and YouTube channel. After the premiere, the production will be available on-demand through Dec. 31st.

Using a smart blend of southern humor and familial love as a framework, Love, M. takes audience members on a journey of what it means to accept yourself and your loved ones for who they are. Told through letters, Love, M. by Clarinda Ross is the story of two mothers at the dawn of AIDS. Atlanta white socialite Deborah writes to her son, Chris, who is pursuing his dream of becoming an actor. Myrtle (Terry Burrell), a Black southern Baptist, writes to her son, Timothy (Lamman Rucker), an idealistic young lawyer. Playwright and actor Ross play Deborah, and Atlanta actor Chris Hecke returns to Horizon as her son, Chris.

From Georgia to San Francisco, love is never simple, but it is always a force to be reckoned with. As audience members enjoy the play, they will pull back the complicated layers that make up a mother-son relationship. This idea of all-encompassing love, along with the history behind the AIDS Memorial Quilt, serves as a backdrop to a story that crosses states, beliefs, and generations. With humor and humanity, Love, M. weaves the abiding threads of the healing power of love as the characters piece their way towards acceptance.

“Throughout the globe, the arts have been a powerful tool to express the various issues confronting our community,” stated Imara Canady, Chair, Black Leadership AIDS Crisis Coalition. “Horizon has a long history of sharing stories that educate and inspire audiences and we are pleased to join them in sharing the powerful stories in ‘Love, M.’ as we continue to bring awareness around the array of social determinants that are connected to the increase in new HIV diagnosis and to reduce the stigma and shame that continues to plague Black Americans around sexual orientation, gender identity., and HIV.”

The AIDS Memorial Quilt was conceived in 1985 by long-time San Francisco gay rights activist Cleve Jones. He wanted to commemorate loved ones who had died of AIDS and allow others the space to do so as well. Jones created the first panel for the AIDS Memorial Quilt in memory of his friend Marvin Feldman, and public response to the Quilt came in an outpouring of love and fabric. People in the U.S. cities most affected by AIDS—Atlanta, New York, Los Angeles, and San Francisco—sent almost 2,000 panels. Donors and volunteers worked tirelessly to create what is considered the largest community arts project in history.

Headlining the cast is Lamman Rucker, who is best known as “Jacob Greenleaf” on OWN’s hit drama series, “Greenleaf,” and for his portrayal of handsome “Sheriff Troy” in Tyler Perry’s, “Why Did I Get Married” film sequel. Audiences will also remember his character Will on the hit film/sitcom “Meet The Browns.” Terry Burrell’s extensive Broadway credits include “The Threepenny Opera,” “Thoroughly Modern Millie,” “Swinging on a Star,” “Into the Woods,” “Honky Tonk Nights,” “Dreamgirls,” and “Eubie!” She wrote and starred in “ETHEL,” a tribute to Ethel Waters. Clarinda Ross started her acting career at the Alliance Theatre in Atlanta and became well-known for her one-woman show, “From My Grandmother’s Grandmother Unto Me,” which was filmed for TV by PBS. Chris Hecke is delighted to return to the Horizon after starring in this season’s virtual production of “Completeness” by Tony Award-winning playwright Itamar Moses.

The creative team for the show features Ross. Ross grew up in the south, and she knows the “Love, M.,” characters well. She was inspired by 30 interviews with artists and AIDS activists to write the thought-provoking and beautiful play through letters. Area theatergoers will be familiar with the work of Horizon Artistic Associate Heidi McKerley, who has been directing at Horizon for two decades, most recently for their inventive and acclaimed production of “Once.”

What does it mean to love someone for all their perceived faults and struggles? “Love, M.” explores this question with grace, dignity, and heart in a powerful journey that will have you crying, laughing, and reaching out for the loved ones in your life. “Love, M.” will premiere at 7 p.m. on Dec. 1st. For information on how to attend the virtual festivities visit horizontheatre.com/love-m.