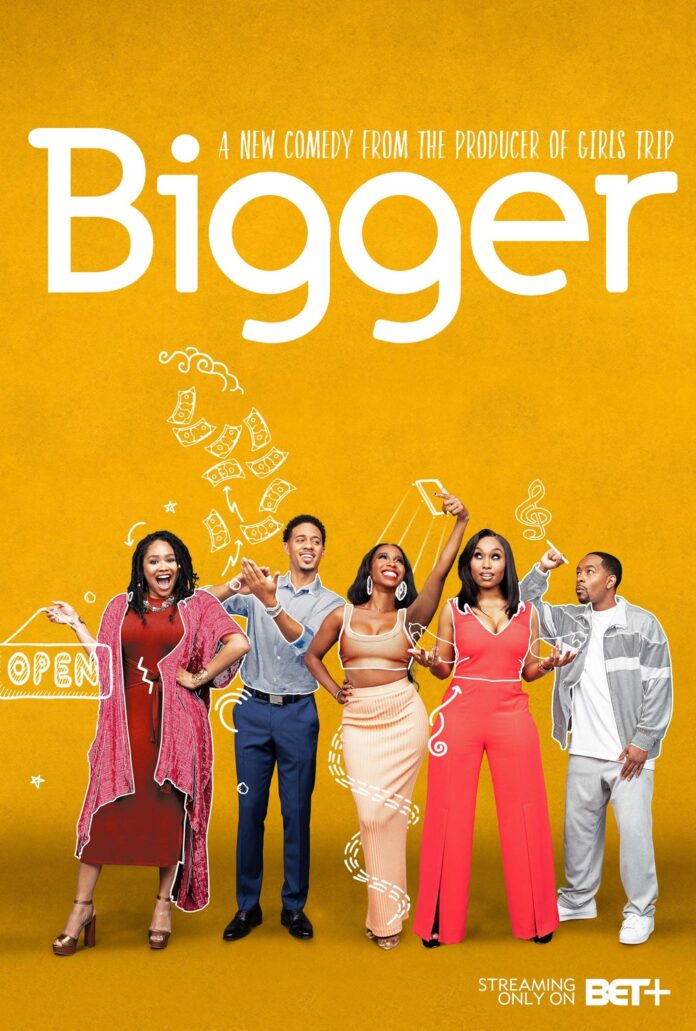 BET announces the linear television premiere of the hit BET+ Original Series, “Bigger,” executive produced by Will Packer and Will Packer Media, beginning Wednesday, January 27 at 10:30 PM ET/9:30 PM CT on BET. The 10-episode first season will air weekly ahead of the previously announced season two, set to debut in 2021 exclusively on BET+. “Bigger,” follows a single-black-woman who is dealing with the threat of marriage to a boring-in-bed boyfriend and the sudden, random death of a college acquaintance. The tragedy drives her ambitious group of friends to take a deeper look at their stagnant lives, asking themselves— is there something “bigger” and better in life.

Episode 101 – Pilot: After Layne’s bad-in-bed boyfriend proposes marriage, Layne, having doubts about the relationship, has a one-night stand with a bigger and definitely better option – Reggie, much to her friends’ chagrin, while also rebranding her Little Five Points vintage store which is suffering. Tracy learns that being on a reality show and having millions of followers doesn’t guarantee social media success, while Vince struggles trading in the old for the new as he aims to be a bigtime DJ. Veronica, the player of the group, works to grow her real estate business while Deon struggles to climb the corporate ladder, aiming for a promotion at his financial firm.

“Bigger” was created by Felischa Marye and executive produced by Will Packer and Devon K. Shepard who also served as the showrunner. For more information about “Bigger” visit the network’s official page at BET.com. Join the conversation with @BET across all social platforms using #BiggerOnBET and #BETPlusOnBET. All episodes of season one are now streaming on BET+.

BET+ is a premium online streaming service with exclusive originals and thousands of TV episodes and movies from the best Black creators. A joint venture between BET Networks and Tyler Perry Studios, BET+ allows users to stream Black culture including hit movies, TV shows, stand-up comedy, award shows, and specials, all in one place, commercial-free. The new service from BET Networks, a subsidiary of ViacomCBS Inc., is the official home of Tyler Perry’s film, TV, and stage works. The ad-free subscription video-on-demand service also provides users with access to original content from the likes of Will Packer, Tracy Oliver, and many more. Visit BET.com/BETPlus to learn more.

ABOUT WILL PACKER MEDIA

Led by Hollywood producer Will Packer, Will Packer Media is a first-of-its-kind production and branded content company focused on the New American Mainstream audience. In partnership with Discovery, Inc. and Universal Pictures, the company produces episodic scripted and unscripted series across television and digital platforms, compelling content for brand clients, and short-form digital content for millennial audiences. Will Packer’s films have earned more than $1 billion, with ten openings at number one at the box office.

The Moth has a New Card Game Perfect for The Holidays