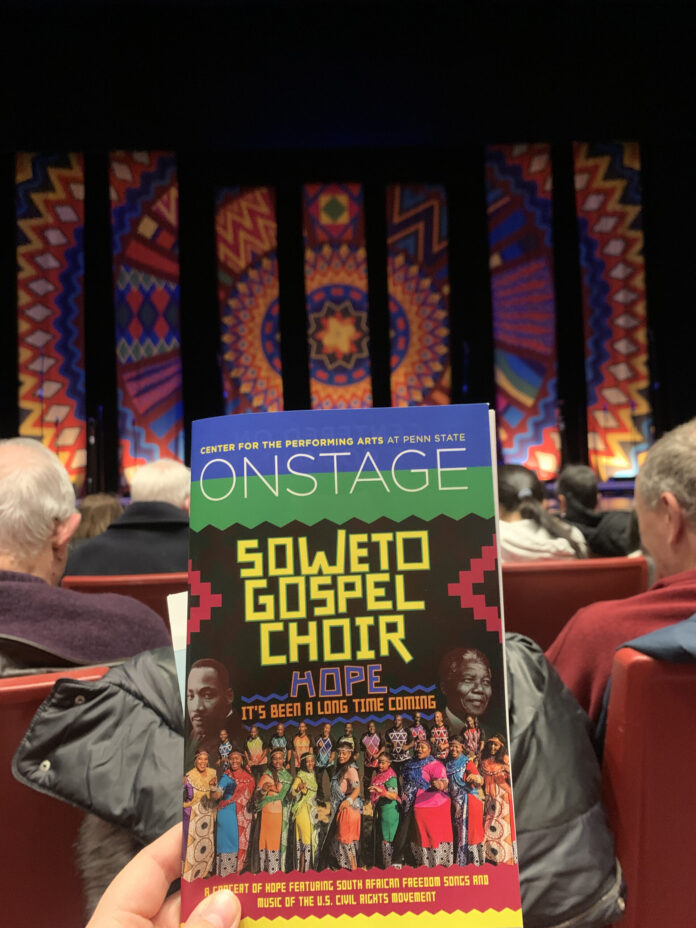 On Tuesday, November 29, The Soweto Gospel Choir held a concert at the Eisenhower Auditorium in State College, PA. The event shared a heartfelt message of hope from songs that highlighted the struggle of South African Communities fighting oppression. The songs they performed were from the voices of people praying for a better life. These songs showed resistance, came from the soul and spoke messages of hope.

They formed in 2002 in the South West Township of Soweto outside of Johannesburg, home to Nelson Mandela. The choirs’ goal is to inspire audiences worldwide with a blend of African gospel, freedom songs, and international hits. The choir has shared the stage with singing icons, Aretha Franklin, Beyonce, Diana Ross, Stevie Wonder, and John Legend.

Since the group’s stardom, they have won many awards including three Grammy’s and an Emmy Award.

Singing in six of South Africa’s 11 official languages, the groups’ vocals will send shivers down your spine. Their dances made the audience want to join in their performance. Their astonishing vocals were so beautiful and elegant that the audience craved more backed with instrumentals that you could feel vibrate your chest.

The group set list included: “Melodies”, “Umandela Uthi Ayihlome”, “Judgement Day” and “Mbyai Mbayi”. The most powerful songs performed were “Mbyai, Mbyai” a song about having to run away in fear of being shot down. And “Stand Up” the song from the Academy Award-nominated film Harriet.

The choir ended the show with holiday cheer, singing songs including, “Silent Night” and “Oh Holy Night”, both sung with grace and passion, and “We Wish You A Merry Christmas”.

The group is set to tour across North America, the UK, and Europe through the end of the year. The group’s new album is also set to come out in the next few months.

Feed the Fight – Building the Bridge that will Benefit Healthcare...