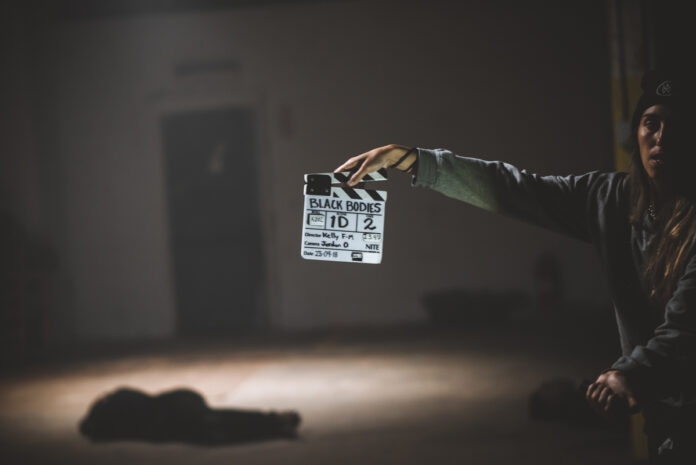 Kelly Fyffe-Marshall was part of the viral incident that took place at a California Airbnb that resulted in neighbors calling the police on them assuming they were burglars. After dealing with this high-profile incident of racial bias, she was compelled to turn to art for healing as a way to work through the trauma created “Black Bodies.” The short film stars actress Donisha Prendergast who is most notably known as Bob Marley’s granddaughter. The film features Komi Olaf and Prendergast performing spoken word pieces about the trauma of being victimized by anti-Black racism.

ENSPIRE interviewed with Kelly Fyffe-Marshall (KM) on the production of “Black Bodies.” Please view the interview below.

How does it feel to have your film premiere at the 2021 Sundance Film Festival?

KM: Having our U.S. premiere at Sundance has been such an honor. To be among some of the industry and cinematic elite has been an amazing experience and I’m so happy to share this message on a bigger platform.

What made you want to pursue film directing?

KM: Storytelling has always been a passion of mine since I was a child, I just wasn’t sure how I was going to do it. As a child I was into theatre, my path eventually led to TV, then to film and here I am.

How did you come up with the idea for the film? The idea behind the name, “Black Bodies.”

KM: “Black Bodies” birthed as a response to the state of our current society, an answer to the question; “what is it like to be Black in the 21st century?” As a way to work through that trauma, I turned to my artistry. I wanted to tell a story for people who are constantly ostracized, appropriated, and targeted. What does this weight feel like without words? What is the feeling that wells up inside every time you hear of an injustice? How does it feel to be powerless and so powerful almost simultaneously? It is difficult to encapsulate trauma into words, this film allows for people to let the moving images speak for themselves.

Were there any obstacles when shooting the film?

KM: This was an overnight shoot in a cold warehouse, so all of the obstacles that came with that. Everyone was tired, cold, we have a lot of background performers and limited time.

What should we expect to see from the film? How will this film give insight into how the Black community feels in the 21st-century?

KM: People should expect to feel. It is important to share emotional insight, I want people to be more caring for other people’s experiences, to create a place for healing and understanding.

Are you planning to do any more projects?

KM: My next film is called, “When Morning Comes,” a coming of age story about a little Jamaican boy named Jamal who learns that he is being sent to live in Canada for a better life. It is his goodbye letter to Jamaica and my love letter to the country that influences so much of our world today.

Do you have any advice for upcoming filmmakers?

KM: Make all the films you can. That’s how you learn who you are, what you have to say, and how to get better at it. Find your team, you can’t do it all, find people who are passionate about different things, and work on your dreams together.

ENSPIRE interviewed Donisha Prendergast (DP) about her character’s role in the production of “Black Bodies.” Please view the interview below.

Why did you want to be involved in this production?

DP: After our incident, we had all collectively decided that we wanted to make some kind of creative statement. So, when Kelly approached me about playing the female lead in both films, it was a no-brainer. It is important to tell stories that have the potential to create an emotional impact, especially in a time that is so racially charged. To have the agency and the ability to tell one’s story is easily taken for granted. If you don’t tell your story, someone may try to tell it for you.

How is this production bringing something new to this story?

DP: Unfortunately, the topic of the film is an all too familiar subject matter. However, I don’t know that it has been told the way we have been able to in such a short time. Poetry has a way of crafting an experience that dialogue sometimes cannot accomplish. It is the inner monologue that embodies a truth that gets under your skin and resonates deep within the soul. Plus, the metaphors in the set design help to amplify the sentiments of the reality of what is happening in an abstract, but in an undeniable way.

Talk about your character in the film.

DP: My character represents elements of the unseen victim, the one who loses twice, the one whose name we almost never hear, the one who is left behind in these instances.

DP: I Identify with her resilience, her defiance, her will to keep fighting. She leaves the scene with resolve to get justice. But what does justice look like when the perpetrators represent the state and institutions that swore an oath to serve and protect the people. All over the world, Black and Brown people are being abused. My character illuminates the reality that she is not considered when the gun is pointing at her Black brother. These extra-judicial incidents must stop, and the police need to be made to stand accountable for their abuse of power.

Were there any obstacles when playing your character?

DP: Yes. The weight of the truth was a heavy burden. I used Diamond Reynolds, Philando Castile’s girlfriend, as a reference and entry point to this character. In preparation for the r role, I had to dig up and reacquaint myself with so many of the stories that we have heard and seen on social media. To digest all that heavy content again at one time was really very emotional and exhausting.

What do hope that the viewers get from watching your character in the film?

DP: It’s like the lead Komi Olaf asks at the close of the poem, “What happens to the mothers left to cry, the promises unkept, and the futures left behind?” I hope viewers are able to reflect on these questions, and that the answers they come up with help to usher a wake-up call. For Black audiences, we know this story and the pain that ensues each time another Black body falls unjustly at the hands of the police. For white audiences, I hope they are able to gain some emotional insight and confidence to engage in these conversations. I want this film to be used as a tool to navigate this urgent dialogue that isn’t taking place in ways that can really shift how we interact with each other and the bitter truth of race relations and justice in America.

Do you have any advice for upcoming actors?

DP: Process is important. Immersing yourself in a role can be extremely taxing, especially if you haven’t prepared yourself mentally, physically, and emotionally. Characters demand space in your soul. Honor the space they must occupy, and release it when you’re done. Be intentional about the roles you select. Always have an exit strategy … a way in and a way out. Some kind of Catharsis is very important to help keep the work.

Through storytelling and visuals, Fyffe-Marshall and Prendergast came together to overcome trauma with art and poetry. “Black Bodies” captivates about the realities of being Black in the 21st century. The premiere was shown at the 2021 Sundance Film Festival on Jan. 28th.

The WNBA’s Seattle Storm Prepare for a Return to Action