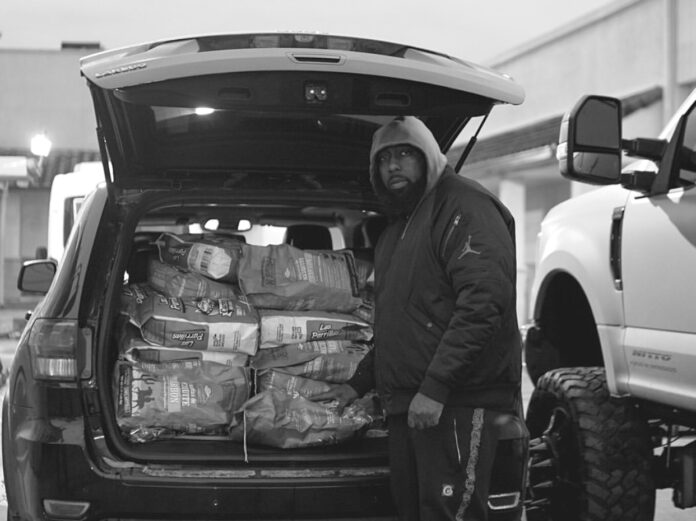 Winter Storm Uri was a major winter and ice storm that tore across the United States and left millions of Americans with limited to no access to power or heat. The Arctic blizzard, which is the second of two winter storms that ravaged the U.S. between February 10-11 and February 13-17, originated in Siberia and swept through the states within a one-week period. However, Texas was most notably unprepared and now faces an ongoing power crisis involving mass power outages, water and food shortages, and dangerous weather conditions.

Even without power and heat amid bitterly cold temperatures for Houstonians for four days straight, Houston’s hometown hero Trae Tha Truth and his Relief Gang wonder twin DJ Mr. Rogers have taken to the streets of H-Town, surrounding communities to provide thousands of meals, water, generators, bags of charcoal, wood, and other supplies, and that’s just the tip of the icicle.

In a region where freezing temperatures and ice storms—like those experienced by Texans this week—are extremely foreign, countless elderly, sickly, and families have been without electricity, food, access to heat, medical supplies, and access to power to run life-saving machines for nearly a week.

In Texas, as the electricity grid struggles to keep pace with record-high demands amid a historic cold outbreak, people are turning to unsafe means to heat their homes. A woman and a girl died of carbon monoxide poisoning in Houston after a car was left running in a garage to keep them warm, according to police. The Arctic air has also claimed the life of at least one homeless person in Houston.

Without invitation, as per usual, Trae and Rogers jumped into action, posting messages to their popular social media pages offering aid to those in need and imploring restaurants and businesses to allow them to buy out inventories so that they could personally deliver these items to the darkest, coldest, and hardest-hit areas. View Trae’s Channel and DJ Mr. Rogers’s Page on Instagram for amazing updates on how they are helping thousands every hour on the hour!

According to Trae, “It’s bad out here, man. Getting hot meals is one thing, and that’s important but we are looking into what’s going to happen next week when people have to return to homes that have been flooded from burst pipes, and unloveable conditions…it’s a non-stop fight for survival.”

Trae explained that he and Mr. Rogers are actively devising a plan that calls local plumbers to join them in providing services to families at a fair rate, considering the state emergency that has crippled so many. Trae is hoping that compassionate plumbing experts will allow the Relief Gang to compensate them directly on behalf of the residents with burst pipes, sewage backup, etc. at a discounted rate.

In a live tonight interview with Shahiem Reed of Twitch TV’s “The Walkthrough,” that was originally slated to discuss Trae Tha Truth’s and fellow rapper/activist Mysonne’s upcoming album release If You’re Scared Stay Inside, the tireless humanitarian rather joined the episode from the streets where viewers could see and hear him—boots on the ground, showing up for his hometown and fellow man. View full interview here [Trae comes on at 56:48].

Trae recounted details of their plight and voiced concern over his anticipation that insurance companies will be so overwrought with millions of disaster claims he fears people will have to wait for weeks just to see or get on a call with an agent to even file a claim. He and Rogers are contemplating how they will provide relief to them and many others.

Alas, Texas is a proven resilient state and its people’s spirit and courage shine best in the face of adversity—Trae and Rogers, perhaps, being the poster children for this sentiment. Our prayers and thoughts are with them and the entire Lone Star State.

They advised anyone interested in helping can do so by sharing information across all platforms and doing what’s in their hearts. The Relief Gang can be contacted via Instagram or by calling 346-857-9617.