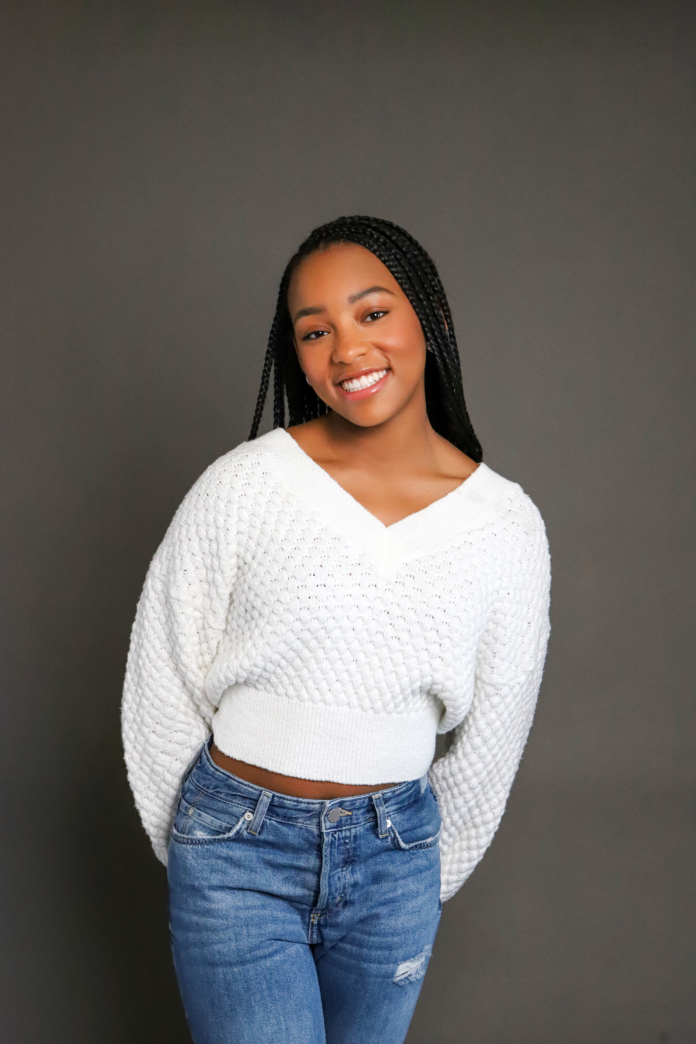 Actress Sydney Mikayla stars as Trina Robinson in the award-winning series General Hospital, which is currently the longest-running daytime drama in production. As part of the new generation of teens in Port Charles, Trina has formed a tight bond with Josslyn Jacks and Cameron Webber as they navigate the trials of life.

She is a hard-working intern who has become close with former mobster Ava Jerome (played by Daytime icon Maura West) while working at her art gallery. Loyal viewers were excited to see Marcus Taggert (played by Réal Andrews) return to the show after a long absence and were shocked by the revelation that he is Trina’s father. Her character has evolved from the token best friend to playing a pivotal role in the show’s current storyline.

She also is bringing her talent to the world of voiceover. Mikayla can currently be heard in a lead role as Wolf in Kipo and the Age of Wonderbeasts, an animated series that follows a young girl who has been thrust into an adventure on the surface of a post-apocalyptic Earth. Her character is the deuteragonist who works alongside Kipo and is described as “tough-as-nails.” The cast also includes Sterling K. Brown, Dee Bradley Baker, and Deon Cole, to name just a few. The show is streaming now on Netflix.

Mikayla got her big break starring as Gabby Douglas in the Lifetime movie The Gabby Douglas Story. The movie chronicled the journey of Olympic gymnast Gabby Douglas, the first African American ever to be named individual all-around champion in artistic gymnastics at the Olympic Games. Mikayla’s moving performance earned her a Young Artist Award for Best Performance in a TV Movie.

ENSPIRE Magazine got in touch with Mikayla to discuss her experiences with acting and to get some inspirational advice for aspiring actors around the world. Here is what she had to say.

So, your mom put you into acting when you were five, but what is it about acting that you love the most? What about it inspires and motivates you?

Well, I have to admit that when I first started going on auditions as a kid, my mom would get me yogurt afterwards as a treat. So at five years old you’re just thinking, “Yes! Yogurt Day!” But as I grew up and actually started training, I started to love the idea of becoming someone different each time. When I’m acting, I can totally step outside of myself and be anyone. That’s a pretty awesome feeling. I’m inspired by the fact that acting to me is something that isn’t perfected. There is always room to learn and grow. I’m motivated by the strong, powerful actresses that I see who are really paving the way for the younger generation.

What is the most positive thing you’ve faced in your acting career? What were some challenges you faced and how did you overcome them?

I experience positive moments when I get to watch myself on screen and I actually enjoy my performance. I am often very critical of my own work, but I think it’s important so I can continue to improve. My mom coaches me most of the time, so when we both watch my work and have very few notes, it is really gratifying. I believe one of the most challenging parts of the entertainment industry is when you don’t book as much as you would like. In those moments, you have to remember your passion and love for the art, as well as find a community of like-minded artists who understand what you’re going through and can support you.

How did it feel to go into voice acting for the first time? Were you nervous? Is it similar to acting? Any challenges you faced or was it easier? If so, how come?

My first voiceover acting role was on The Loud House, which is on Nickelodeon. I was extremely nervous because it was one of my favorite shows and I really wanted to do well. But if you are truly prepared, your nerves won’t take over, and your performance will be stellar!

Voiceover acting IS acting just not on camera. I still research, analyze the script, and try to put as much detail into my character’s voices as possible—the same effort I put into an on-screen role. One of the great things about doing voiceover is that I don’t have to memorize the lines, but I still prepare as much as possible.

Like? How about LOVE!? Wolf is unapologetically herself, and while she is willing to learn from her friends, she rocks her natural fro and kicks butt! I’d love to voice her again!

Trina Robinson is your longest-running role to date. How did you feel about your character taking on more of a main role? Can you relate to your character in any way?

It was pretty incredible to book the role of Trina, and she continues to be such a wonderful character to play. Having a main role on a television show for over two years is such a blessing, and I am so grateful because playing this character has really helped me to grow as an actress and as a person. I can relate to Trina because we are both loyal friends and we both speak our minds. Her love for her friends and family is something I hope I emulate in my real life.

Are there any specific types of roles or characters you enjoy embodying more? Why or why not? Do you have a favorite movie or TV genre? Do you prefer live-action or animated, or do you enjoy both equally?

I really just hope to embody and embrace more unapologetically Black female characters. I really hope to be in all types of shows, movies, and genres. I love live-action and voiceover acting because they give me a chance to practice versatility within each role.

Lastly, what is some expert advice you can give to young, aspiring actors and voice actors?

Love what you do! This industry isn’t always easy, so continue to train, perform, and explore your craft because you LOVE it!

Mikayla additionally had a large role in Nickelodeon’s critically acclaimed hit series School of Rock. Other notable guest-starring roles include Fuller House, Criminal Minds, Community, Speechless, Parenthood, Hawthrone, Instant Mom, Yo Gabba Gabba!, Craig of the Creek and Days of Our Lives. She lent her voice to characters on The Loud House and We Bare Bears Trained at the Amazing Grace Conservatory under actress Wendy Raquel Robinson, as well as at the Debbie Allen Dance Academy.