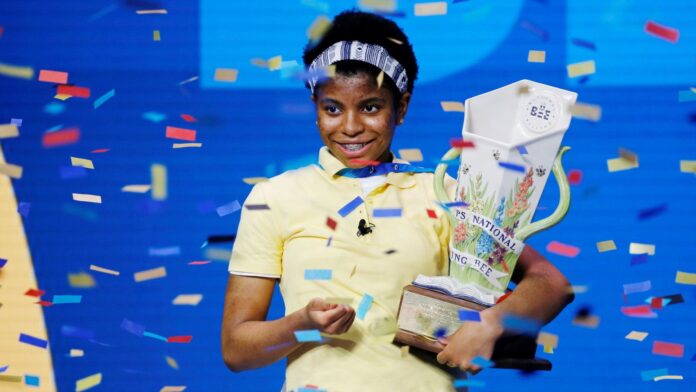 An eighth-grader from Harvey, Louisiana, Zaila Avant-garde has secured her place in the history books as she correctly spells the word “Murraya” during the bee’s live finals at Walt Disney World‘s ESPN Wide World of Sports Complex in Lake Buena Vista, Florida. She is the first African American to win the National Spelling Bee. For us who are unaware, Murraya is a genus of flowering plants in the citrus family, Rutaceae, distributed in Asia, Australia, and the Pacific Islands.

The only previous Black champion in the Nationals was also the only international winner: Jody-Anne Maxwell of Jamaica in 1998. The Bee, however, has still been a showcase for spellers of color over the past two decades, with kids of South Asian descent dominating the competition. Zaila’s win breaks a streak of at least one Indian-American champion every year since 2008.

The National Spelling Bee victory isn’t the only new record Zaila has set; she is a prodigy in basketball and is recognized for dribbling numerous basketballs at once. Zaila’s skill has gotten the casting agents’ attention, showing off her skills in an ad featuring NBA star Steph Curry.

In a statement made on the Huffington Post by Zaila Avant-garde, she states, “I kind of thought I would never be into spelling again, but I’m also happy that I’m going to make a clean break from it,” Zaila said. “I can go out, like my Guinness world records, just leave it right there, and walk off.”

Zaila is a young lady with extraordinary gifts, and she will only become greater. Her resilience, determination, and strive to break records are purely demonstrations of one who possesses black excellence. Keep up the great work, Zaila Avant-garde!

Mahisha Dellinger: Against All Odds. From the Projects to the Penthouse