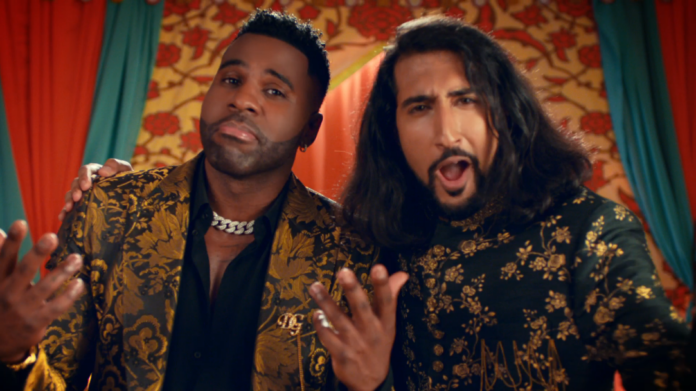 In the vivid official video for their re-imagination of Tesher’s global hit, “Jalebi Baby,” Canadian-Indian rapper/producer Tesher and award-winning singer/songwriter Jason Derulo play restaurant workers fighting for the attention of a gorgeous customer. Director Gil Green captures the song’s Bollywood Hollywood feel with elaborate dance sequences choreographed by Jeremy Kenyel and Divya Jethwani. The multicultural nature of Jalebi Baby and its dance scenes marks the first time a major American artist has performed a Bhangra routine on screen, making the song and its video an exciting milestone in the music industry. The elaborate and thrilling video can be seen HERE.

Tesher and Derulo performed “Jalebi Baby” on the “TODAY” show last week as part of the Citi Music Series. View HERE. With its incredibly catchy chorus, an effortless blend of English and Punjabi lyrics, and Latin-flavored production, Jalebi Baby has become an upbeat, inclusive anthem for people of all cultures, with combined global streams approaching 200 million.“Jalebi Baby” is one of the year’s biggest TikTok songs with seven billion global video views and over three million TikToks set to the original song so far. This success has landed Tesher and Jason Derulo as the main characters in the newest #ItStartsOnTikTok global campaign, highlighting how the ‘Jalebi Baby’ remix came to be. TikTok is changing the way people consume music. A springboard for songs and artists, TikTok breathes new life into catalog tracks and also provides a fresh platform for emerging and established musicians alike to reach new fans.

More About The Artists

About Tesher: a multilingual rapper, singer-songwriter, producer, and mixing engineer, Tesher is bringing South Asian influences to the global soundscape in ways never heard before. His Canadian upbringing and Indian heritage have led him to create genre-defying and energetic music that resonates with audiences beyond his dual identity. Following in the footsteps of K-Pop and Latin acts before him, Tesher authentically bridges the gap between the cultures – owning the narrative and his South Asian identity through his innovative music.

Standing at the forefront of the globalization of music, Tesher equally belongs to both the East and the West. His career skyrocketed in 2020 when he added his own vocals to his remix of Justin Bieber’s “Yummy.” After his vocals blew up on TikTok and Instagram, Tesher found fans begging him to create an independent solo record. With that vote of confidence, they inspired him to create the viral hit “Jalebi Baby,” which he later reimagined with Jason Derulo.

About Jason Derulo:  Forward-thinking, genre-defying, and massively creative, Jason Derulo has staked his claim as one of the most dynamic forces on the global pop landscape. Since breaking through with his five-times-platinum single “Whatcha Say,” the award-winning singer/songwriter has sold over 200 million records worldwide. His latest triumphs include emerging as one of TikTok’s most influential users, boasting the 11th overall biggest account on the video-sharing platform, prevailing as the fourth-most-followed male, and regularly amassing over five million views per TikTok post. Now at work on his highly anticipated fifth album—and full-length debut for Atlantic Records—Derulo recently delivered a series of smash singles while operating as an independent artist. Those tracks include the wildly catchy “Lifestyle” feat. Adam Levine, “Take You Dancing” (a pandemic-era love song that’s inspired over a half-million videos on TikTok), and the double-platinum “Savage Love (Laxed – Siren Beat)”—a collaboration with New Zealand-based producer Jawsh 685 that hit No. 1 on Top 40 radio, with its official BTS remix reaching the top slot on Billboard’s Hot 100. A truly multidimensional creator, Derulo has also established himself as an actor and businessman, investing in enterprises like Catch L.A. and Rumble Boxing and becoming part-owner of Bedlam Vodka. With his most recent ventures including launching an innovation-minded podcast and developing a line of supplements and fitness products with the Najafi Group and BodyBuilding.com, he’s also partnered with Z2 Comics to create a graphic novel — a project based on a superhero called Uzo, the crime-fighting character he first introduced on TikTok.

Jalebi Baby’s immense success with views of the lyric video already nearing 100 million shows the potential for music and art from any culture to inspire the viewer. The collaboration between Derulo and Tesher results in a gorgeous video and a song that’s catchy throughout, and it also shows that no one should be afraid to share the unique traditions from the culture they come from, for we can all benefit from sharing and learning from the wide variety of artistic traditions across the globe. Derulo’s performance of a Bhangra routine on screen is a great example of the benefits of this cultural cross-pollination; not only can it be beautiful and successful, but it is simply fun to share one’s culture. Hopefully, Hollywood and the music industry notice Jalebi Baby’s success and continue to invest in projects that celebrate cultural practices worldwide.