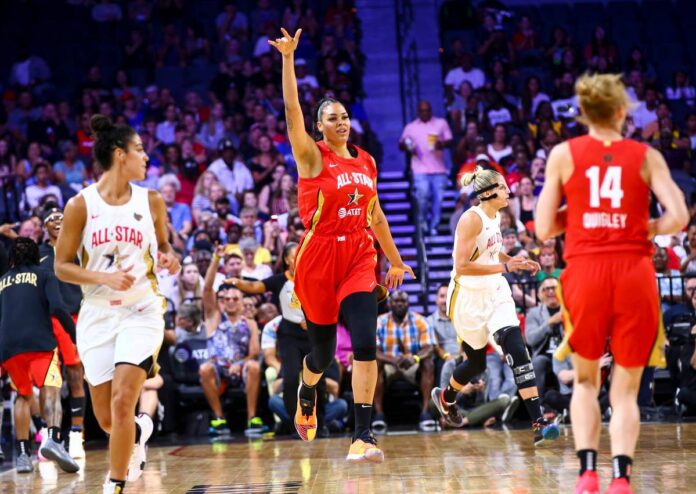 On July 14th, the WNBA held its 17th All-Star Game to celebrate its 25th season. Pitting Team WNBA vs. The USA Women’s National Team, the game was an exciting bout that brought out the best in both teams, ending in a 93-85 win for Team WNBA All-Stars. While the game was full of stories itself, such as Arike Ogunbowale’s 26 points and Candance Parker’s legendary leadership and presence, it was also huge in showing just how far the WNBA and women’s sports have come in the past 25 years despite the many adversities they face.

As part of the night’s celebrations, the WNBA additionally honored the gold-medal winning 1996 U.S. Olympic Women’s Basketball Team, who played a crucial role in launching the WNBA and seeing it become what it is today. With just a quarter-century of progress, the WNBA has increased its presence in American society and abroad, leading to legendary American players such as Candace Parker and amazing foreign talents such as Jonquel Jones stunning display of 18 points and 14 rebounds in the All-Star game. These women’s extraordinary determination and dedication to their game has not only kept it alive but allowed it to continue to grow across the world, a trend that will undoubtedly continue into the future with stars like these.

Regarding the game itself, while every player in an All-Star game is fascinating to watch, there were some on the 14th that put on some wild performances. As mentioned above, Arike Ogunbowale’s 26 points for the WNBA All-Star Team was insane. When asked about her performance, she summarized it both accurately and concisely, simply saying that “It was dope” while also acknowledging other players’ performances, such as Jonquel Jones. Unfortunately for Arike, despite being in the pool for the USA Olympic Team this year, she was not selected. Still, after a performance like this, we can see it is only a matter of time before she gets her chance to dominate on the Olympic stage.

On top of some of the spectacular performances of the night, there were some additional reasons why this wasn’t your typical All-Star game, and part of that comes from just the names of the two teams: USA Women’s National Team and Team WNBA All-Stars. So often with other All-Star Games, especially during the Men’s season where players feel compelled to show up but not necessarily to play, there’s much less intensity. However, any spectator could notice from watching this game that it was one with genuine effort, real intensity, making it a unique All-Star Game. Jonquel Jones elaborated on this, stating that “Everybody said that we wanted to come in and give [the USA Women’s National Team] a good game, get them prepared for their push in the Olympics, but also just compete and show that we’re on that level as well.” As one can see by the final score, Team WNBA All-Stars accomplished this with their victory, and Team USA is certainly more prepared than ever for an Olympic run.

The intensity, skill, and excitement of the WNBA All-Star game were inspiring. Hopefully, it translates to more and more people become invested in the sport, whether it’s cheering for their country at the Olympics or becoming bigger fans of their local WNBA team. We can already start to see this happening with Candace Parker becoming the first female basketball player to be on the cover of the NBA 2K Video Game Series, showing how more and more female basketball players and athletes are getting the attention they deserve. While there is certainly still a long way to go, whether in endorsements or equal pay, these athletes’ skills and dedication to their craft deserve to be recognized and celebrated. Hopefully, they will lead the way for generations more of strong female athletes.

To read more on the WNBA 2K22 Game, check out the link HERE.