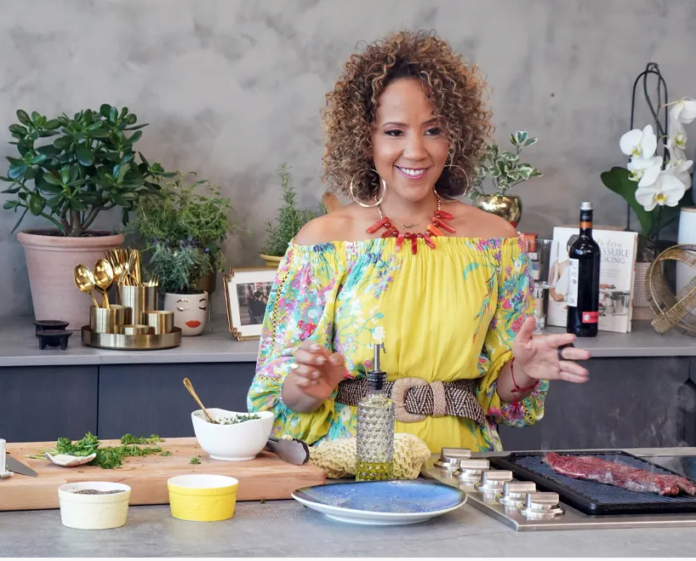 Chef Bren gives a glimpse of her favorite things along with a tasty dish in this week’s episode. Chef Bren starts at a nursery where she shares her love for creating feel-good spaces and tips for the best starter plants. Then, in the kitchen, she prepares an exotic Squid Ink Casareese with Sirloin and Cherry Tomatoes. Finally, chef Bren whips up a Peach and Nectarine Skillet with Tropical Granola and Coconut Gelato to complement the fantastic meal. This meal combo will give viewers plenty of feel-good vibes to last throughout the week.

Herrera is an award-winning celebrity chef, TV personality, entrepreneur, actress, author with an infectious ability to curate and tell stories that matter. Born in Havana, Cuba, and raised in Washington, D.C., she fell in love with cooking at a young age as her Mom introduced her to the art of pressure cooking. After leaving a lofty career in law, Herrera turned to cooking as her way to celebrate her Afro-Cuban roots but also to entertain through dynamic experiences. She combines Cuba’s vibrant plate, seeded in African, European, and Spanish culture and cuisine, with modern flavors and textures to create memorable and imaginative dishes in her very soulful kitchen. She is the pressure-cooking Queen whose philosophy is to save time and energy so that you can spend precious time with your loved ones without sacrificing flavor and nutrition. And today, she shares a recipe with our readers her famous Peach and Nectarine Skillet with Tropical Granola and Coconut Gelatin.

Powerhouse Productions produce CULTURE KITCHEN with co-owners Rochelle Brown and Sonia Armstead as Executive Producers. For TV One, Jason Ryan is the Executive Producer in Charge of Production, and Donyell McCullough is Senior Director of Talent & Casting.