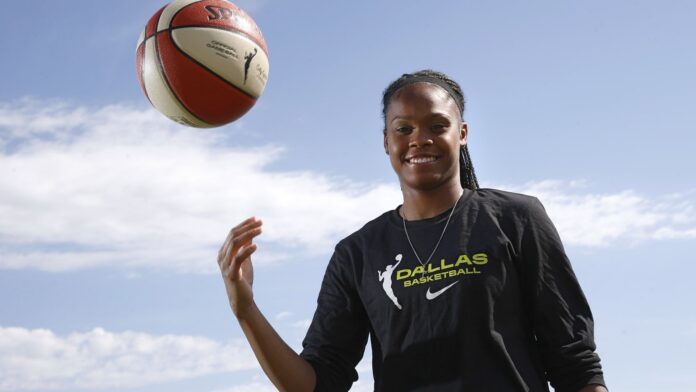 ( ENSPIRE Sports ) Moriah Jefferson, A Champion In The Basketball World Hopes To Do More Positive Things For Her Community

Moriah Jefferson is a 27-year-old basketball star for the Dallas Wings of the Women’s National Basketball Association. During her early basketball career, she led many teams to victory and won many championships and titles. In addition, she received recognition for all defensive players of the year and won the Nancy Lieberman Award! Unfortunately, she sustained a knee injury that forced her to sit out for the rest of the season during 2017. She underwent surgery to fix the cartilage in her right knee, and after nine months of missing 17 games in 2018, she returned. She was traded to the Dallas Wings before the 2019 season but chose to sit out for rehab. She made her debut again in 2020 but suffered another injury that forced her to sit out the season.

Moriah is an inspiration to us all through her determination and leadership. Her entire life has been dedicated to basketball, and she has received many awards for her assists and scores since middle school! She continues to fulfill her legacy of playing on a basketball team and hopes to utilize her Arts college degree to start a clothing/styling company for men and women of all ages in the near future. When she isn’t dedicating her time to basketball, she’s helping youth and serving the community. She has recently partnered with her trainer to start a mini-camp called Sunday School to help young children interested in basketball develop the skills needed to play for the big leagues.

ENSPIRE spoke with Moriah Jefferson about her basketball career and her future plans, and here is what she had to say.

What inspired you to choose basketball as a sport?

Growing up, my entire family had been involved in sports, and I started playing when I was six and immediately fell in love with the game. I grew up playing on a boy’s team with my brothers and our mom as a coach. This not only brought me closer to my family but helped grow the burning passion and desire to play basketball every single day.

How did your knee injury hinder your career in basketball?

Having my knee injury hinder me solely by not allowing me to be on the court. In some ways, I look at it as a blessing and a curse because of the mental and physical growth that I had during the years of time off. Without my injuries, I don’t know if I would have a level of gratitude for playing the game every day.

What is your biggest accomplishment during your time playing the sport?

My most significant accomplishments playing the sport would have to be winning four national championships in a row at the University of Connecticut and being drafted number two in the WNBA draft the following year.

What was a challenge you had to overcome during your basketball career?

One challenge I had to overcome during my career was dealing with back-to-back knee injuries. Taking that much time away from the game can mentally and physically damage a player if you allow it to. I had to work extremely hard to keep my mind and body right during those times. Some days were more challenging than others, but keeping God first and surrounded by family and friends’ amazing support. As a result, I grew into a better person and player.

Why did you pick a Bachelors in Arts with a focus on business communications? What are your goals?

I chose a degree in business communications to learn how to better market myself as a player and as a person. I think it is essential for athletes to share their stories in ways that can inspire others. After retiring from the WNBA, I also plan on pursuing a career in sports broadcasting.

Can you tell us a bit more about the clothing company you hope to start?

I plan to start a luxury streetwear clothing brand that consists of the various styles and personalities that we have in our league. I enjoy wearing fashionable clothes that I can also feel comfortable in. So I plan to design a brand that allows you to be cute and comfy at the same time.

How do you help your community?

During the WNBA season, the league does an incredible job of providing each player with several opportunities to serve in their communities. For example, this year, I partnered with the American Cancer Society, where I led a campaign spreading awareness of breast cancer in the African American community.

What do you hope to accomplish with your Sunday School camp?

I hope to give young girls and boys around the Dallas/FortWorth area the tools to succeed on and off the basketball court. Teaching them skills that I have learned throughout my years of playing. I hope that these skills will allow them to have long and prosperous careers for years to come.

Do you have any advice for up-and-coming basketball stars?

The advice I have for up-and-coming basketball stars would be to enjoy the moment you are in now. It is easy to get caught up in what your future will look like, but in doing so, you miss the value of the journey. The best thing you can do is cherish every moment that you are in and work hard along the way.

Overall, Moriah Jefferson is a motivational woman who is determined to follow her dreams no matter what obstacles come her way. With such a long history in basketball, she is still helping her community by giving young children skills in the sport and starting a clothing company. In addition, her leadership qualities inspire other women to follow their passion and never give up. She dedicated her life to helping others, whether it’s her team or her community; she is an inspiration to us all.

Another article you may enjoy: WNBA Moments on Hot Shot