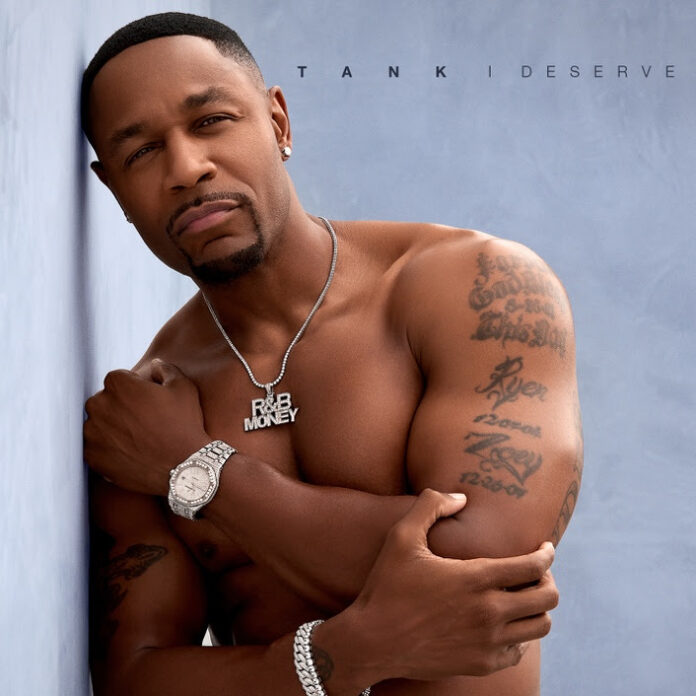 Tank, the 9x GRAMMY® Award-nominated R&B superstar, has announced the release of his new single. “I Deserve” is available at all DSPs and streaming services via R&B Money/Atlantic Records; an official music video directed by Matt Alonzo and starring Adam Waheed and Juhahn Jones is available on YouTube.

“I Deserve” allows us to see Tank bringing his extraordinary two-decade career full circle by sampling his now-classic single, 2001’s Top 40 smash, “Maybe I Deserve.” The new single heralds the upcoming release of what will be Tank’s last album, R&B MONEY, due to arrive Friday, February 4, 2022. Written, produced, and sung solely by Tank, “Maybe I Deserve” recently made its long-overdue streaming debut alongside the artist’s landmark first three solo albums, including 2001’s RIAA gold-certified, #1 debut, FORCE OF NATURE, 2002’s ONE MAN, and 2007’s chart-topping, GRAMMY® Award-nominated SEX, LOVE & PAIN. Rolling Stone acknowledged the historic streaming premiere with an exclusive interview with Tank, writing, “For the first time, fans will also be able to travel through his catalog in reverse, rewinding from 2021 to 2000.”

“I Deserve” follows the premiere earlier this year of the #1 R&B hit, “Can’t Let It Show,” featuring an instantly memorable sample of Kate Bush’s “This Woman’s Work” and available now at all DSPs and streaming services; an official music video is streaming now at the official Tank YouTube channel HERE. Hailed by REVOLT as “emotionally charged,” the track proved another chart-topper for Tank, reaching #1 at Adult R&B radio outlets nationwide.

Tank’s tenth studio album, R&B MONEY marks the full-length follow-up to 2019’s acclaimed ELEVATION, highlighted by the #1 singles, “Dirty“ and “I Don’t Think You’re Ready,” both of which reached the peak position on Billboard’s “Adult R&B Songs” – Tank’s fourth and fifth time atop that airplay chart. ELEVATION in turn followed 2017’s SAVAGE, featuring the blockbuster single, “When We.” The RIAA platinum-certified single – which marked the only core R&B record to crack Billboard’s “Hot 100” in 2018 – spent 13 consecutive weeks atop the Billboard and Mediabase Urban AC charts, ultimately being named as both outlets’ #1 Adult R&B Song of 2018 while also earning a nomination as iHeart Radio’s “R&B Song of the Year.” In addition, the official “When We” companion video now boasts over 115M individual views via YouTube alone HERE.

Among his many achievements, Tank, who yesterday was nominated for Favorite Male R&B Artist at the 2021 American Music Awards airing on Sunday, Nov. 21, has proven an in-demand actor with roles including Lifetime’s recent film, Lust: A Seven Deadly Sins Story, executive produced by Bishop T.D. Jakes and co-starring Keri Hilson. Last year also saw the launch of two successful projects, R&B Money Podcast and the YouTube reality show, Babbs to the Bone, an unscripted series featuring his wife Zena Foster-Babbs and their children.

For streaming options and ways to purchase the Tank’s music, check out the link HERE.

The ENSPIRE ‘Be Well’ Print Edition featuring Robert Ri’chard is available for sale on MagCloud.