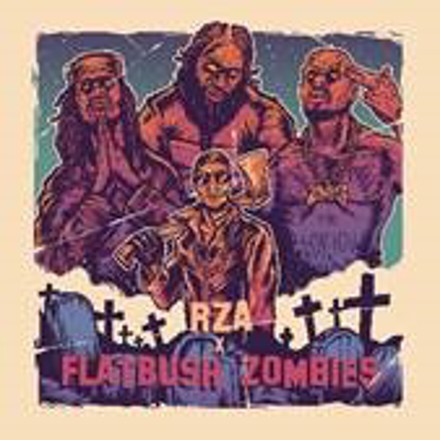 RZA and Flatbush Zombies have once again teamed up to release the new cinematic track “Quentin Tarantino”. The reverent cut was produced by RZA and Prince Paul (with additional production from Erick The Architect), a rekindling of the horrorcore subgenre that RZA and Prince Paul popularized as Gravediggaz in the ‘90s. “Quentin Tarantino” concludes the artists’ “double feature,” which kicked off with “Plug Addicts,” last week.

The music video for “Quentin Tarantino” is also out, celebrating the work of visionary director Quentin Tarantino, and continuing where the “Plug Addicts” visual left off.  The white suit-attired Zombies roam around Los Angeles in their vintage wheels, spitting dark lyrics over the track’s dreamlike beat.  RZA reprises his role as executioner, reimagining Mr. Blonde’s iconic cop-torture scene beat. The video, like “Plug Addicts” was shot and directed by John Tashiro (of SHOTCLOCK) in Downtown LA.

RZA shared some words about the track and video, “This song is a dedication to one of our favorite directors, Quentin Tarantino. His movies pioneered another level and style of filmmaking artistry. We are doing the same with our art…continuously expanding the palette of hip hop and music.”

Meechy Darko of Flatbush Zombies added, “I tend to draw my inspiration from more than just music…When we linked up with RZA, one of the first things we spoke about was our affinity for movies. This track is a dedication to Tarantino, a genius not only behind the camera but also with the pen.”

RZA’s company 36 Chambers A.L.C. has also recently announced a partnership with MNRK Music Group. Beginning today with the release of Plug Addicts; 36 Chambers and MNRK will release a host of projects throughout the coming months, which includes the highly anticipated album Saturday Afternoon Kung Fu Theater by RZA and DJ Scratch, as well as a Joey Bada$$ collaboration, a new artist Weather Park, and even the long-awaited Bobby Digital album.

Check out “Plug Addicts” here. For information on where to stream “Quentin Tarantino”, check out the link here.