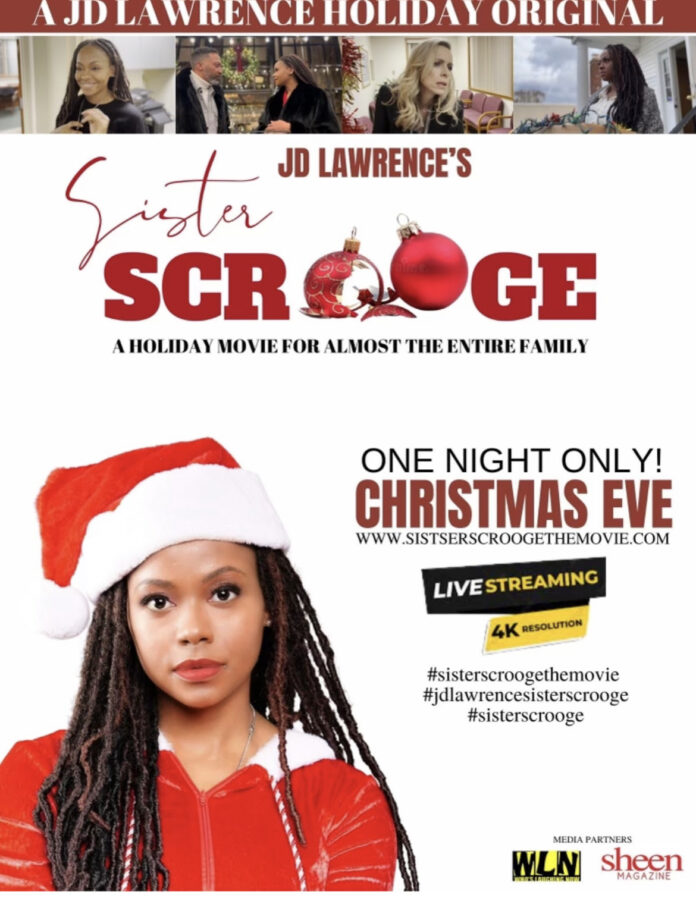 While this special time of year is known for Santa Claus double-checking his list to see who’s been nice or naughty, chestnuts roasting on an open fire, and Jack Frost nipping at your nose, nothing beats a humorous or great Christmas movie to get you in the holiday spirit. So get ready to queue up the drama and laughs in the new holiday Dramedy-Thriller “JD Lawrence’s Sister Scrooge” by multi-award-winning producer, writer, director, creator, and actor JD Lawrence.  JD Lawrence’s Sister Scrooge will premier December 24, 2021, at midnight (eastern), streaming on SisterScroogeTheMovie.Com.

Lawrence in the entertainment industry is considered “The King of Dramedy” with a proven track record of successful national stage productions and various television shows on major networks such as Bravo, Aspire, BET, etc.  So, there is national excitement at announcing his first-holiday film JD Lawrence’s Sister Scrooge.  The film features a cold-hearted character played by actress Nessa Noel.  She despises Christmas and has no time for sentimentality.  As you can imagine, this Scrooge-Etta has similarities to many previous versions of the Ebenezer Scrooge fairy tale.  Yet, in this 2021 updated version, JD Lawrence’s Sister Scrooge doesn’t take rejection well at all, and yes, she’s very naughty and not so nice. The entire film was captured on an iPhone-13 Pro Max (Cinematic Mode) and edited on the new Mac Book Pro (Apple M1 Max chip).

JD Lawrence’s Sister Scrooge’s impressive ensemble combines veteran actors Tony Davis (Manifest, Godfather of Harlem, and Raising Kanan Power Book III), Nessa Noel (BETher/MakeupXBreakup), and actors from JD Lawrence’s Acting & Improv Workshop on Clubhouse.  You won’t find Lawrence in his production for the first time. In JD Lawrence’s Sister Scrooge, he takes the time to concentrate on directing and producing while still managing to push the audience’s buttons to deliver his signature style of Dramedy.  Enjoy the belly of laughs, unapologetic jaw-dropping one-liners, along with unimaginable twists and turns.

JD Lawrence is nationally known as a writer, director, and producer of theater, television, and film.  Lawrence Executive Produced and created the docu-series based around his national stage play “Your Husband Is Cheating On Us” for NBC/Universal’s Television Network Bravo.  Your Husband Is Cheating On Us television broadcast gained him a tremendous following with Bravo audiences and left a lasting marketing impression with the network executives they now use to promote other shows. In addition, Lawrence has executive produced, written, directed, and starred in productions on other networks, such as Aspire, Viacom’s BET, UPtv, TV One, Urban Movie Channel, VH1, GMC, and Up Faith & Family. Amazon, iTunes, YouTube, VUDU, eOne, Sony Home Entertainment, and Momentum Pictures distribute Lawrence’s productions worldwide.

Lawrence has mastered the art of improvisation infused with drama, comedy, and music.  In 2019, he used those skills in his one-man show, “SKITZophrenia,” where he played 73 characters, surpassing the Guinness World Records holder of 53 characters held since 2001.  The Grammy and Emmy Award-Winners’ director has written, directed, and worked with Ashford & Simpson, Jackee’ Harry, Sheryl Lee Ralph, Fred Hammond, Ginuwine, Tony Terry, and El DeBarge, to name a few.  The NAACP Legacy Award Winner and multi-hyphenate center in EBONY Magazine’s historical four cover issues (Michelle Obama, Tina Turner, Alicia Keys, and Halle Berry). Lawrence is also dubbed as “The Man of Many Faces.” The New York Times says, “Onstage Lawrence is a prodigious theatrical talent.” The Washington Post calls him “A real quick-change artist.”

Lawrence says, “I find joy in making people laugh, family, and serving my Lord and Savior. In addition, I take pride in sharpening my acting tools in the performing arts, film, and television at the NYU Tisch School of the Arts.”

Watch the film’s “Official” trailer at https://www.sisterscroogethemovie.com. Also, follow JD Lawrence on all social media platforms at @iamjdlawrence or visit his website at TheKingofDramedy.com.

Another article you may enjoy: Dave East Partners with Tracklib for a Beat Battle

Jeffrey James New Single ‘We Can Be Heroes’ Releasing Soon